12 things to see in Sequoia and Kings Canyon National Parks

12 things to see in Sequoia and Kings Canyon National Parks

My family’s last pre-pandemic family vacation was a trip to California. During that trip, we spent three full days exploring Sequoia and Kings Canyon National Parks. We also spent a day at Pinnacles National Park, but I’ll save that for another time.

Sequoia and Kings Canyon National Parks are similar to Yosemite in that all three are located in the Sierra Nevada mountain range, but they are a little further south. They are just far enough south so that they are not convenient to either San Francisco or Los Angeles. Perhaps that’s the reason they are far less crowded than Yosemite: it takes more effort and planning to get there. Are they worth the trouble? How about I show you some pictures of what you can see and do there, and then you can decide. 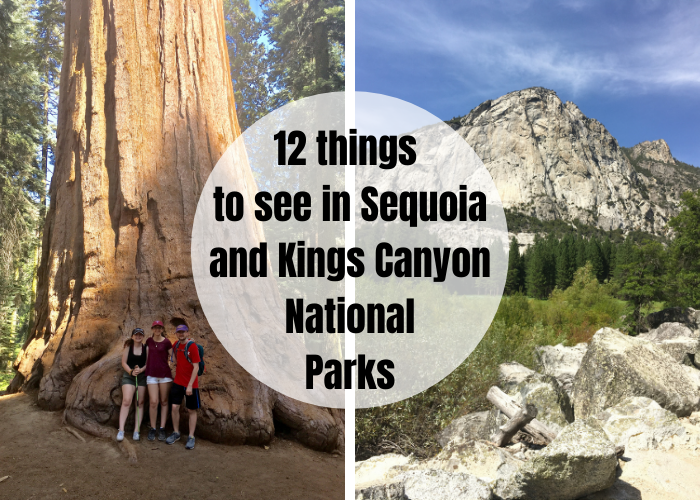 One of the first points of interest we encountered was Tunnel Rock. The people there before us had stopped to take a picture on top of the rock, so we did too. Rather, my family climbed up there and I took the picture. 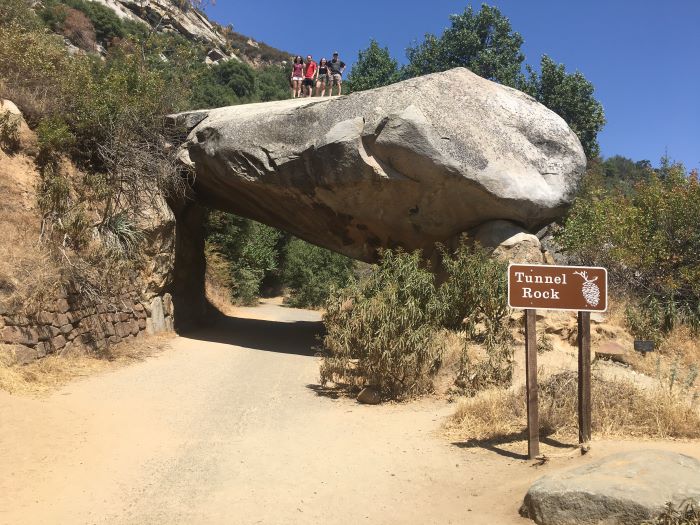 While Tunnel Rock was a fun stop along the way, Moro Rock is far more impressive. Here’s what it looks like from a distance. 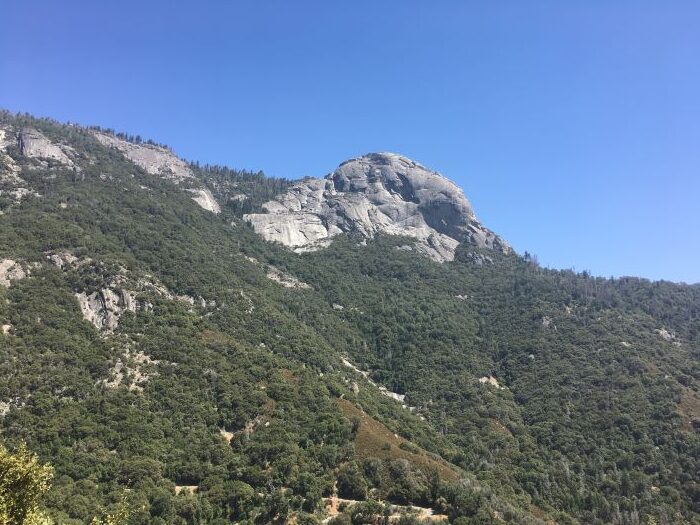 And here’s what it looks like up close, from the back side. 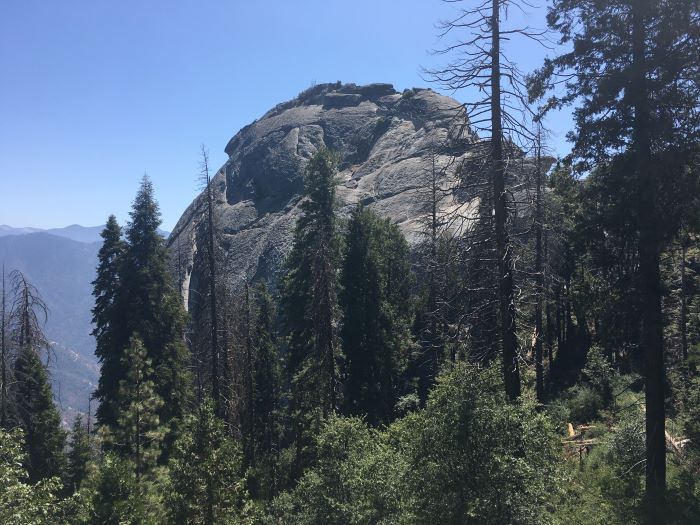 You can hike to the top of Moro Rock. Here’s what the view looks like looking down. Yes, these are my toes. 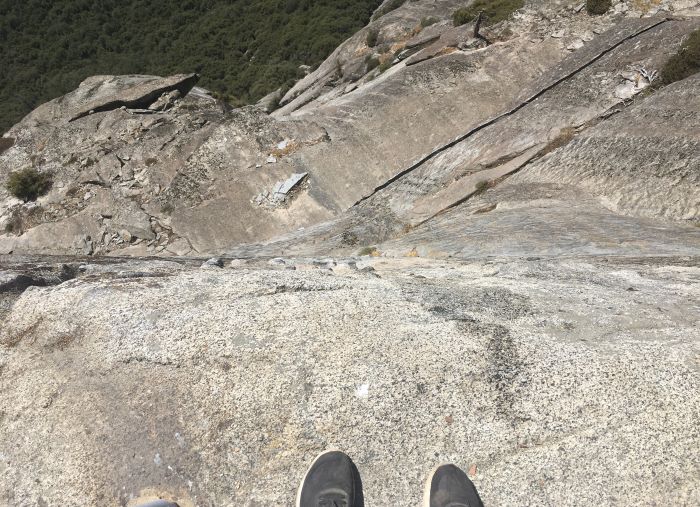 Frightening, isn’t it? What I didn’t show in the picture was the railing that I was clinging to. 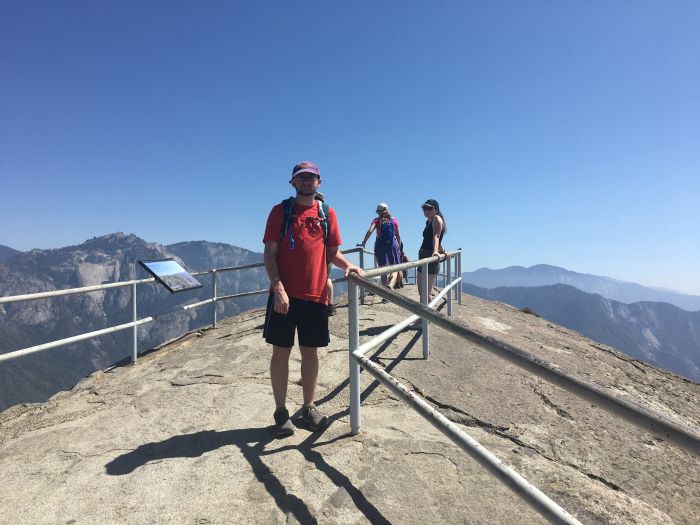 Note that there aren’t big crowds of people. We definitely saw other travelers, but not crowds of them. The view from the top was unbelievable. 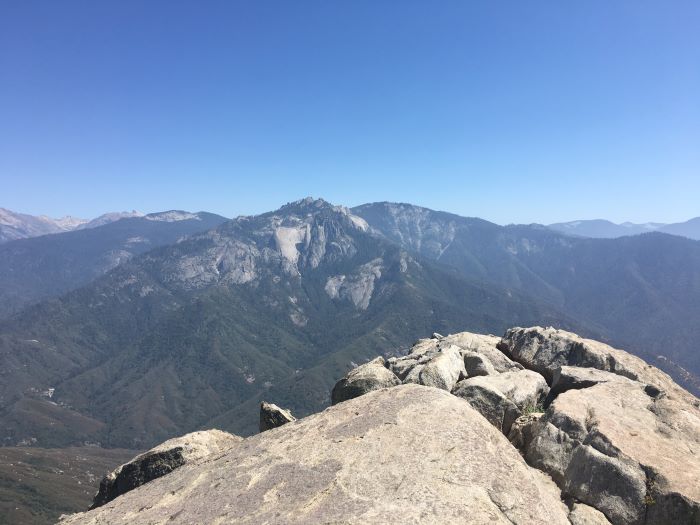 We drove under a Tunnel Rock, why not a Tunnel Log? Yes, it’s a fun photo op, but it’s also a great perspective on just how big these giant sequoias are! 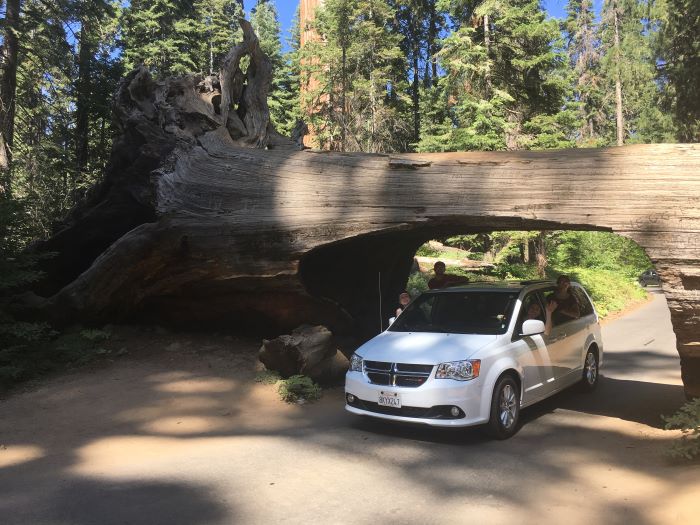 So, once you’ve seen that you can drive a car through a sequoia log, you might be wondering if someone could build a house in one of them. The answer is yes. The early pioneers did. 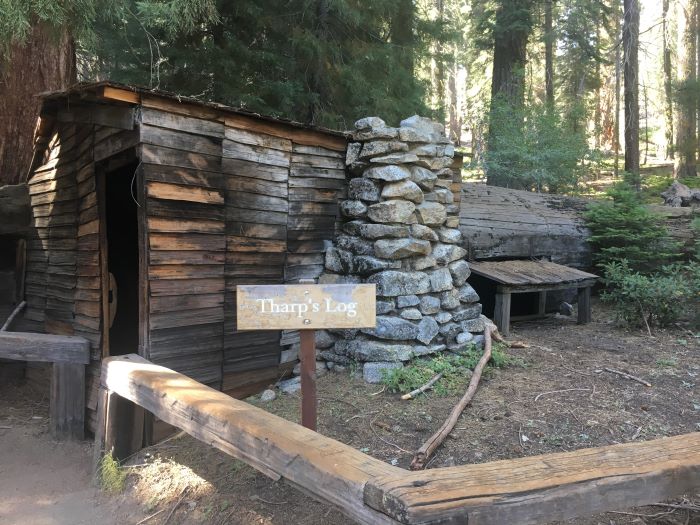 Inside Sequoia National Park is a museum where you can learn more about these giant trees. One display compares the size of giant sequoias and coastal redwoods to monuments like the Statue of Liberty. 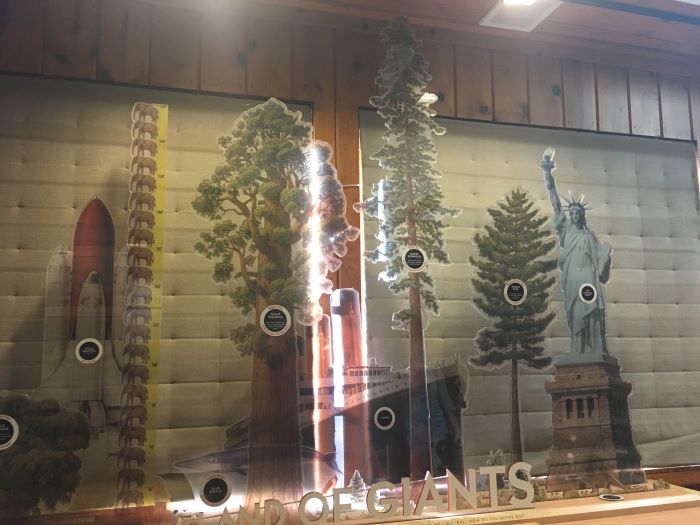 If there is a must-see in Sequoia National Park, it’s the General Sherman Tree. This tree is the largest known living single-stem tree on Earth, by volume. (It is not the tallest.) 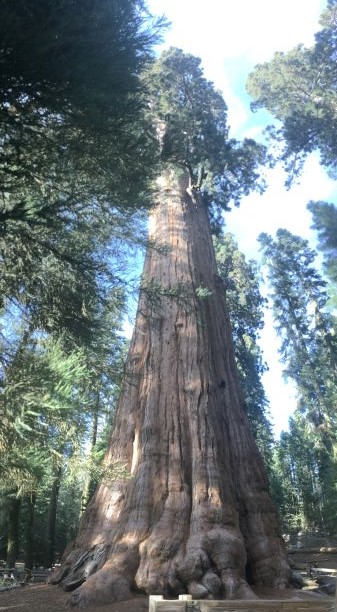 We stopped in two different places where we could swim in a creek.  One had a sandy beach where we discovered a sandcastle. Of course we then had to build our own. We had to improvise though, because we didn’t have our tools with us. 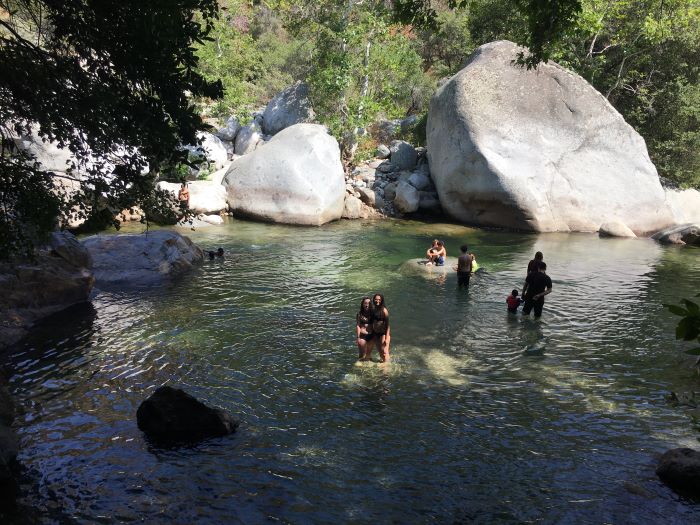 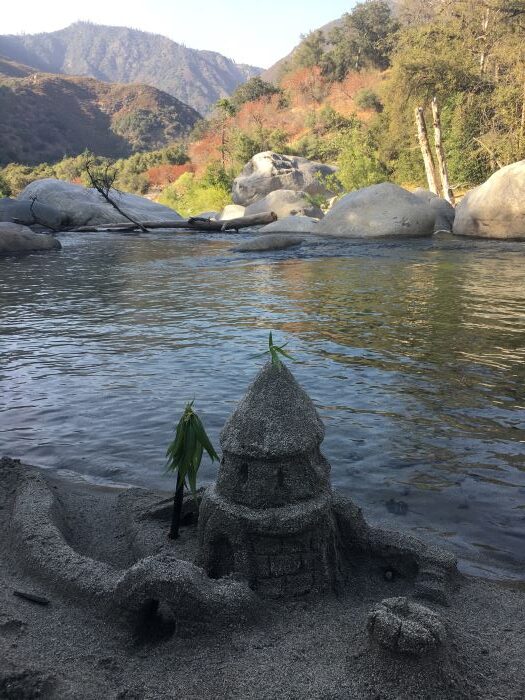 If you’ve been following me a long time, you know I’m always on the lookout for wildlife. Sequoia and Kings Canyon did not disappoint. We saw a cute little black bear and several deer. 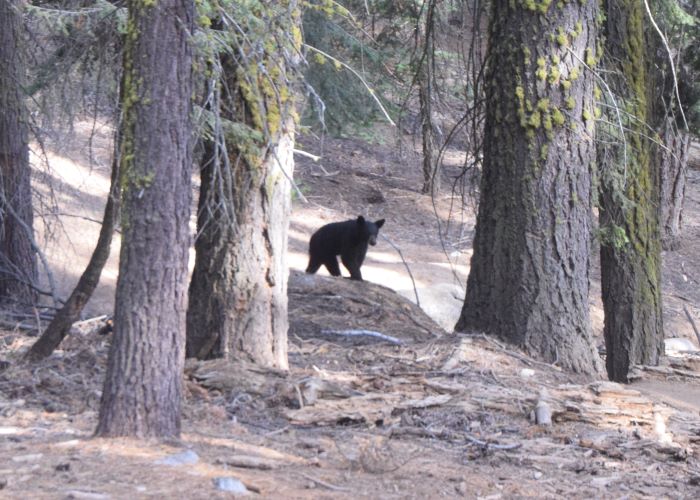 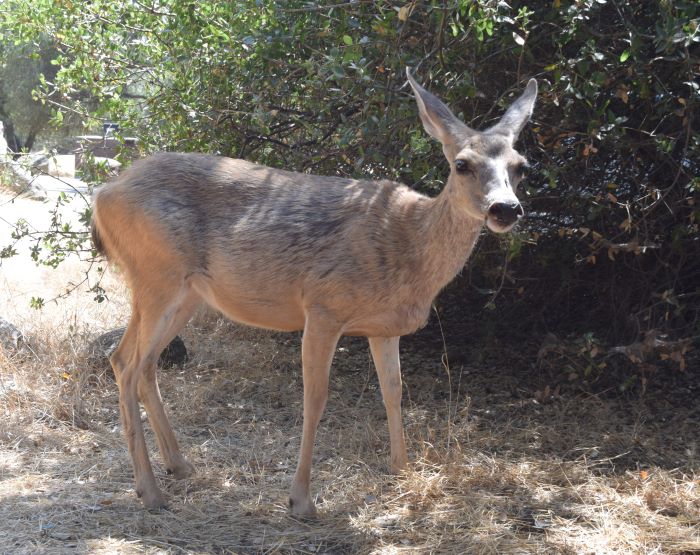 Who doesn’t love a beautiful waterfall? You’ll find several of them in Sequoia and Kings Canyon National Parks. 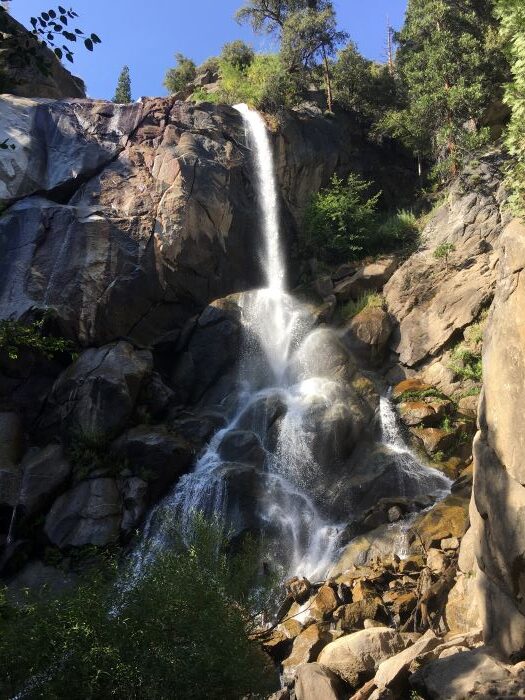 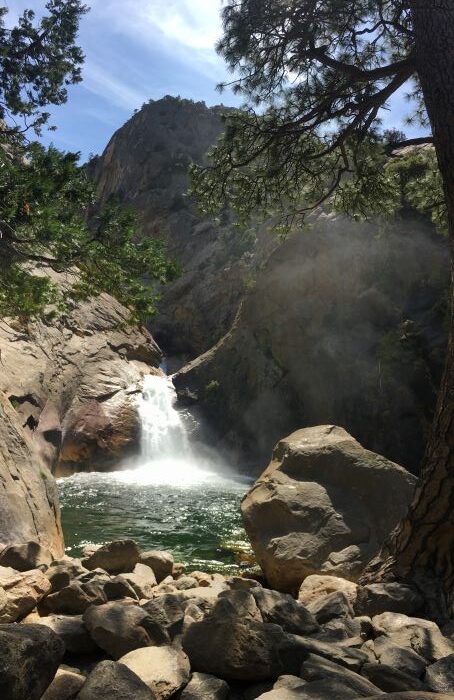 Another of the famous giants is General Grant Tree. It is the second largest tree in the world and is nicknamed the Nation’s Christmas Tree. 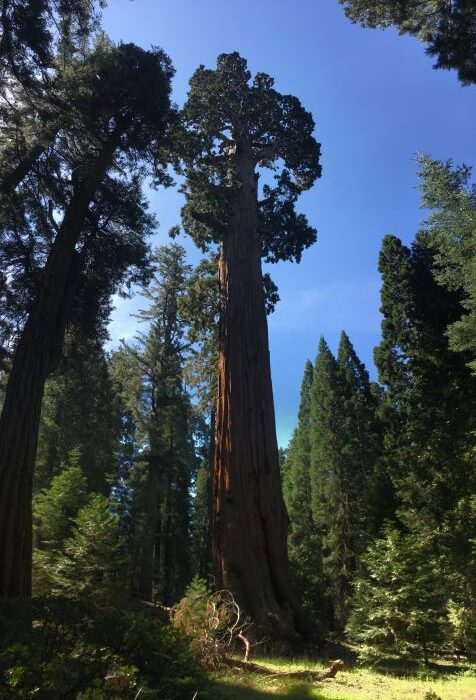 The path to General Grant will also take you past the Fallen Monarch. You can walk through this hollow tree. 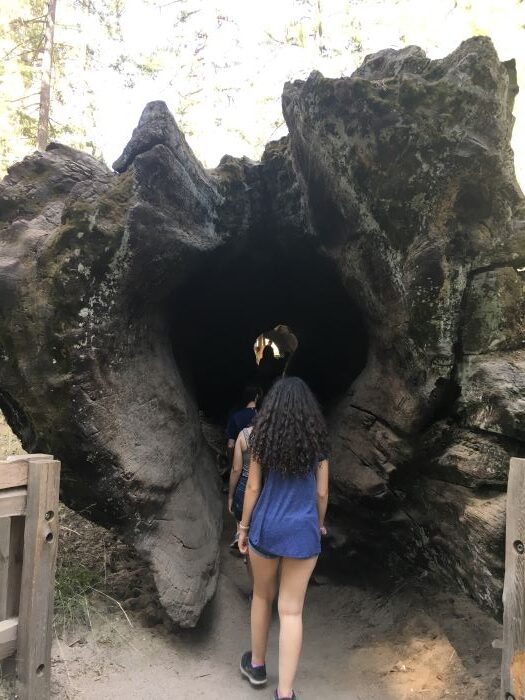 General Grant Tree is located within the borders of Kings Canyon National Park, but it isn’t actually inside the canyon. While it takes another hour to drive into the canyon, the views from the Zumwalt Meadows Trail are absolutely worth it, in my opinion. 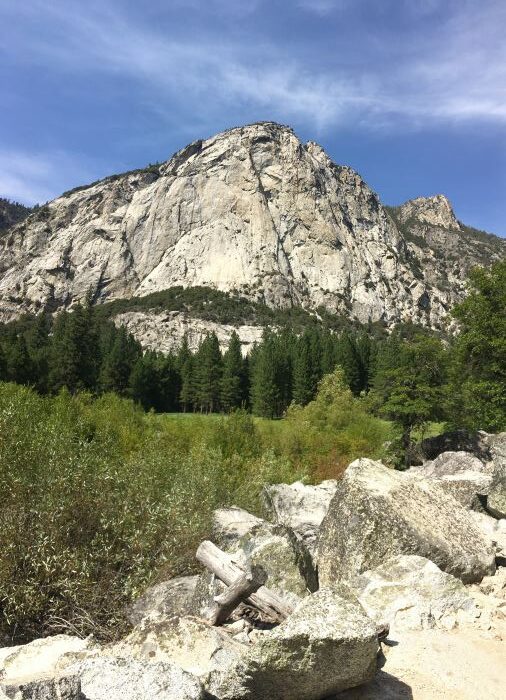 I’m going to mention a few things that didn’t make my list and why they didn’t.

Sequoia and Kings Canyon National Parks have over 200 caves. The National Park Service offers guided tours of Crystal Cave, but tickets must be purchased in advance. We decided not to take a tour because we’ve seen lots of caves elsewhere and we wanted to keep our plans flexible. If we had had another day, we probably would have gone to see it. From what I’ve read, it’s a beautiful cave.

Another thing that didn’t make my list is Mount Whitney. Mount Whitney is the tallest mountain in the contiguous United States and is located on the eastern side Sequoia National Park. So why didn’t we go see it? It’s because there aren’t any roads that cross the park. To get from General Sherman to Whitney Portal, you have to drive around the south end of the park and it takes about five and a half hours!

While we were at Sequoia National Park, my husband learned that it is possible to climb Mount Whitney without any special equipment. However, in addition to being a very strenuous hike, it requires a special permit that is obtained through a lottery system. In other words, you need to plan way ahead for this. And so my husband did. He entered the lottery the following year, trained for a couple months ahead of time, and then climbed Mount Whitney with my son. 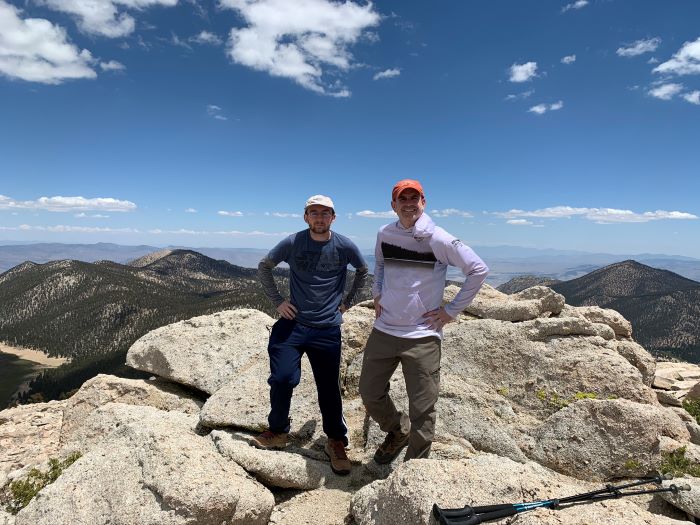 So while it is possible to climb Mount Whitney, I recommend it as a separate trip from the rest of Sequoia and Kings Canyon National Parks.

Would you like to visit Sequoia and Kings Canyon National Parks? I would love to help you plan a trip. Please read about how my planning services work here.