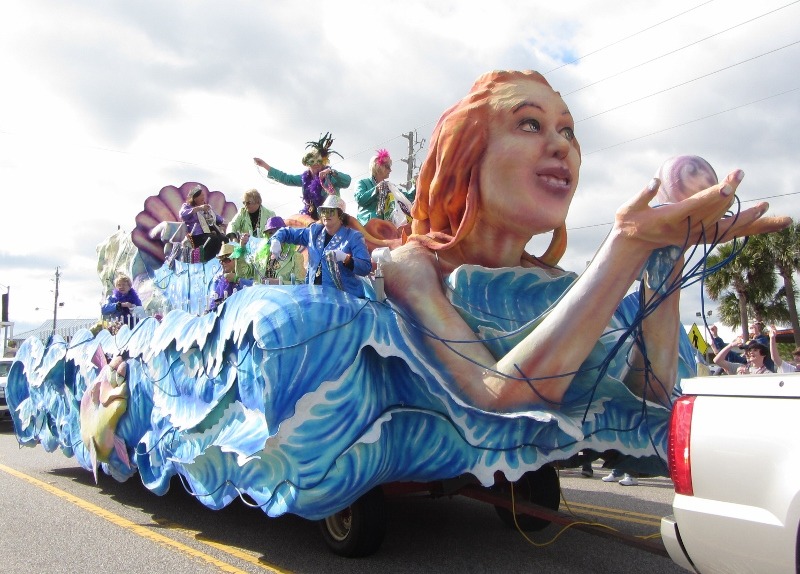 This was the second year we’ve travelled to the Alabama Gulf Coast in February.  Both trips occurred during the Mardi Gras season and we were able to attend parades. You might be thinking, “Mardi Gras in Alabama? Don’t you mean Louisiana?” Actually, Mobile, Alabama holds the claim for earliest Mardi Gras celebrations, having first celebrated Carnival, or Mardi Gras, over 300 years ago in 1703. New Orleans was founded 15 years later, in 1718. Since national news coverage of Mardi Gras celebrations tends to focus on events held on Fat Tuesday (the Tuesday before Ash Wednesday, the start of Lent), many people are not aware that Gulf Coast residents celebrate for weeks preceding Fat Tuesday. Businesses festoon their buildings with Christmas-like decorations, except in the traditional Mardi Gras colors of purple, green, and gold. Newspapers and communities publish schedules of Mardi Gras parades.  While Fat Tuesday is the climax of the season and is considered a school holiday, on the weekend prior to Fat Tuesday there might be as many as 8-10 parades scheduled on a single day. 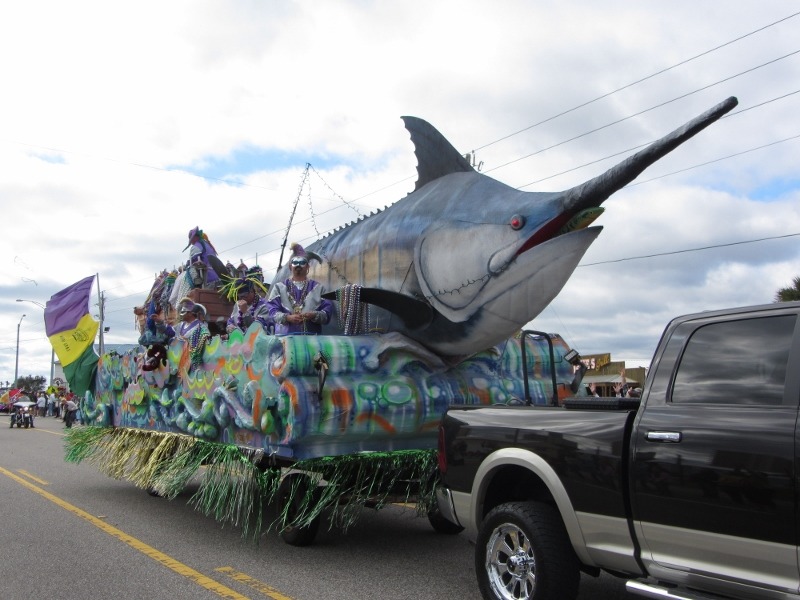 Parades are organized by social organizations, many with exclusive or even secret membership, that are called mystic societies in Mobile and krewes in New Orleans.  In addition to parades, most mystic societies and krewes hold formal masked balls.  Some mystic societies hold balls only and do not participate in parades.  During the parades, mystic society members lavish parade attendees with gifts, or throws, that are tossed from atop the floats.  In addition to plastic bead necklaces, throws might include moon pies, stuffed animals, plastic coins, candy, and toys.  It is tremendous fun, and adults get into the excitement as much as the children.

We’ve attended three Mardi Gras parades in Alabama: one in Mobile last year, and two in Orange Beach this year.  While that by no means makes me an expert, today I’ll share some photos from the parades we’ve attended as well as a few tips we’ve learned in case you’d like to plan to attend a Mardi Gras parade next year.

1.  Get in the Mardi Gras Spirit

Some parade attendees we saw dressed from head to toe in Mardi Gras colors.  Some wore festive hats and a few strands of beads.  Though it wasn’t exactly a scientific experiment, I think those folks who were all decked out may have gotten tossed more throws than those of us in our ordinary street clothes. 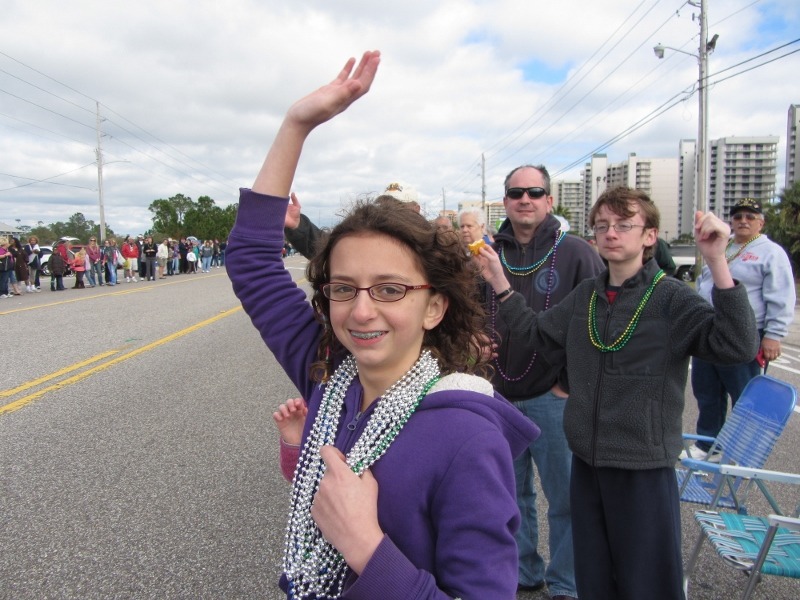 People start staking out their spots up to an hour before the start of the parade.  Plan to arrive ahead of time so you’ve got a front row seat.

3.  Bring bags for holding your goodies

Plastic grocery bags work, but a sturdier bag is a better choice.  At one parade we went to, some kids made a clever device for catching throws.  A decorated wheeled cart holds a sign that says “Beads Please” above a basketball hoop. 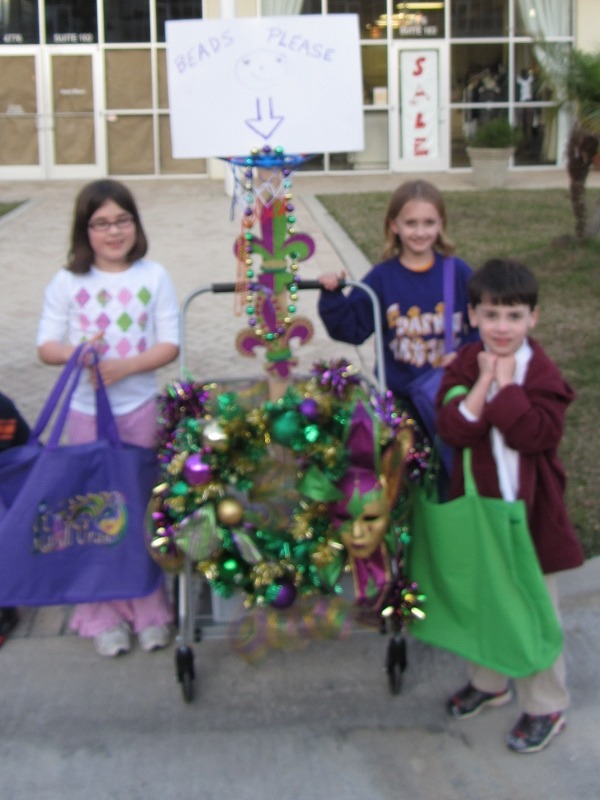 For the parade you will be standing, but since you’re going to be arriving early, you’ll probably want a comfortable place to sit.  Chairs also make a good spot to store the goodies you catch. 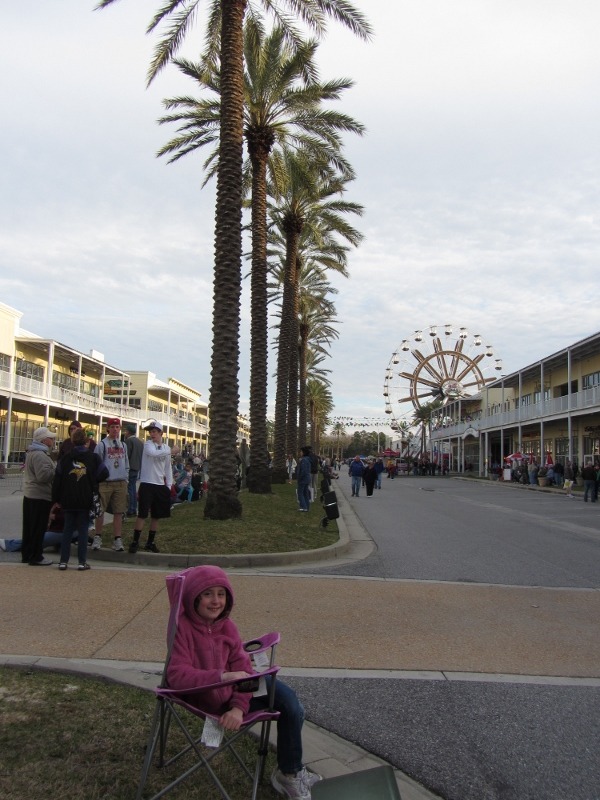 So what makes a good spot?  It depends on the parade route.  Some parades double back on the same route so that in some locations the parade would pass you twice.  I’ve read that floats are not as generous at the beginning of the parade route because they want to make sure they don’t run out of throws.  For some parades you might want to walk a block or so from parking lots or garages to where crowds are thinner. Sometimes you just run into bad luck though. For one of our parades we were next to some rather aggressive adults who had no qualms about reaching out and grabbing throws that were headed straight toward my children.

Once you are situated, just enjoy and have fun.  As this float says, “Laissez les bons temps rouler.”  I never learned French, so I had to use Google Translate to figure that out.  It means “Let the good times roll.” 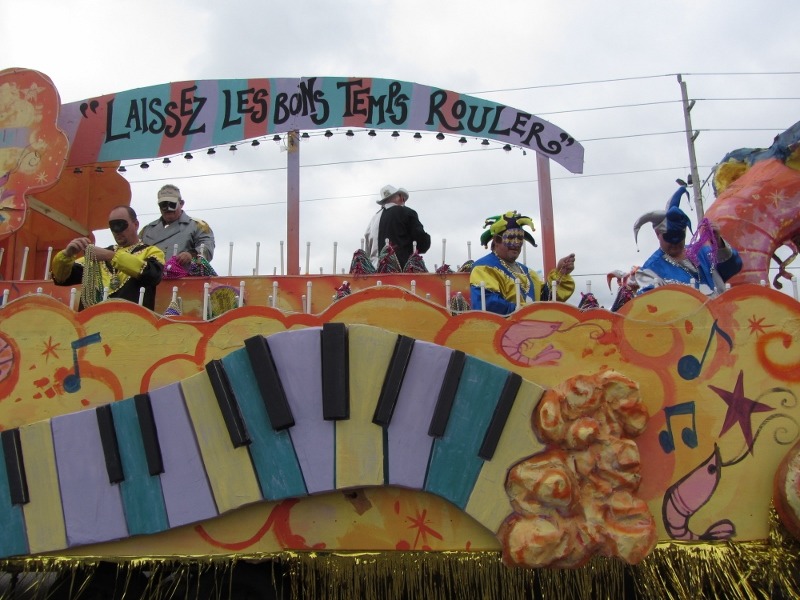 It’s very exciting to see the first float coming in the parade.  You can hear the people shouting and see the throws flying off the float. 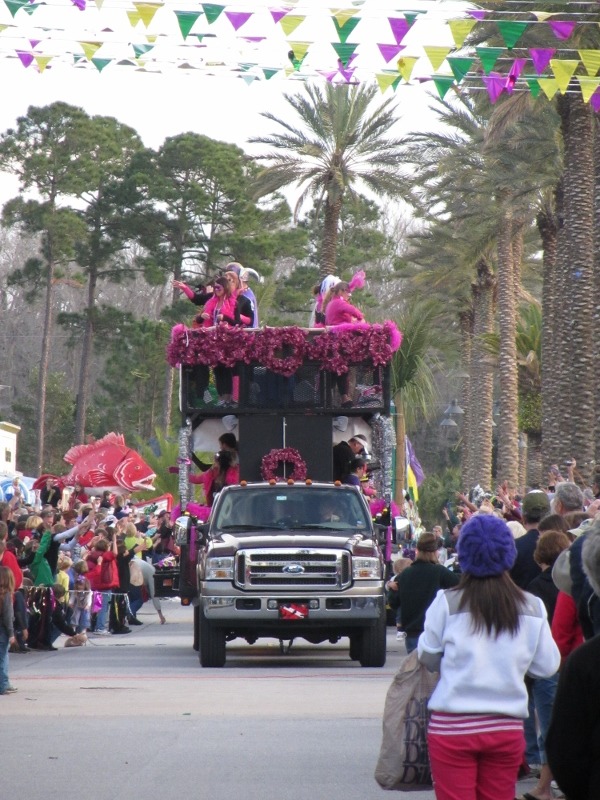 Most of the floats at the parades in Orange Beach had an aquatic theme. 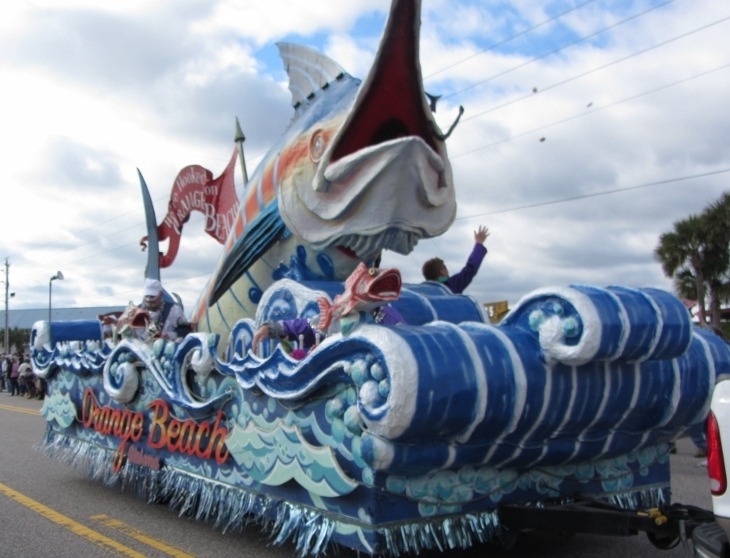 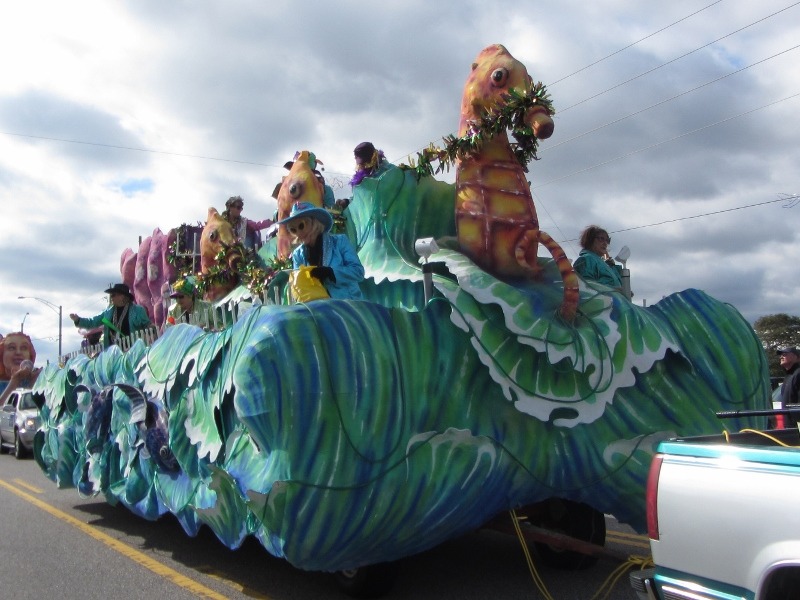 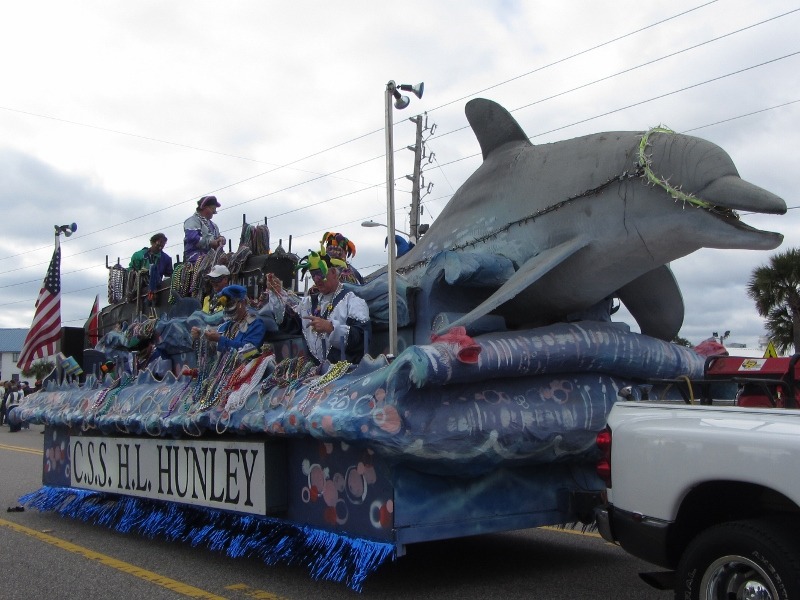 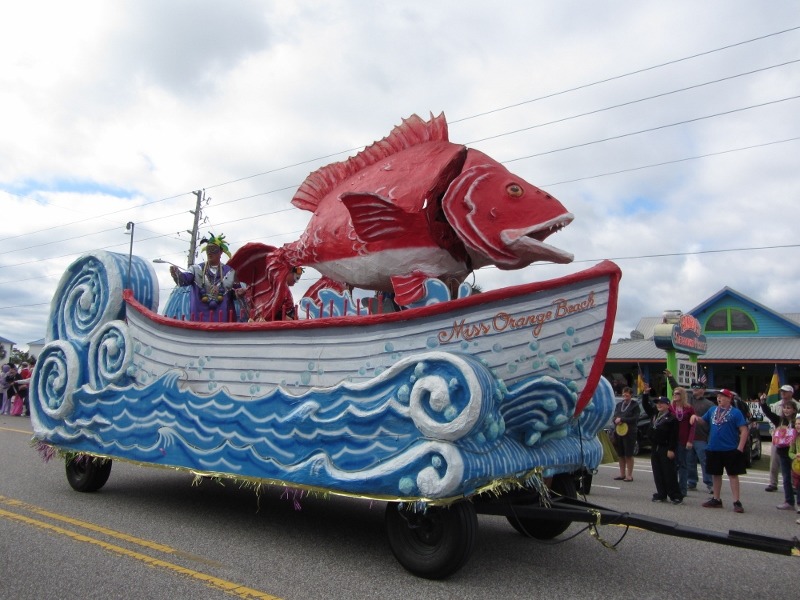 Have you been to a Mardi Gras parade?  If so, do you have any other tips to share?  Please share them in the comments.