We recently returned from a road trip during which we saw almost a dozen national parks, and you know what? My kids kept talking about one of the parks that we visited almost a year ago, one that I hadn’t yet written about. And, technically, it isn’t a national park–it’s a national monument–but that doesn’t really matter. I’m going to dub Lava Beds National Monument “The Best National Park You’ve Never Heard Of”. 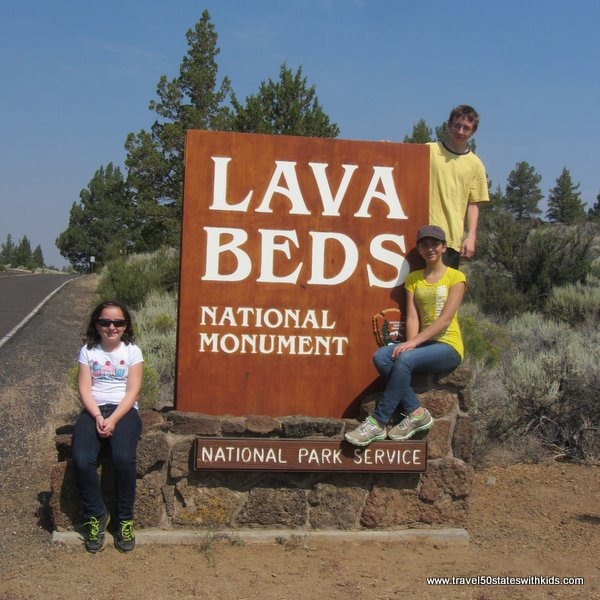 Lava Beds National Monument is located in the far northern part of California, near the Oregon border. It sits on top of the massive Medicine Lake Volcano. Past eruptions of this volcano have created over 700 lava tube caves, the highest concentration in the contiguous United States. (To be candid: before learning of this park, I was not aware that you could visit lava tubes in the contiguous United States. I thought you had to go to Hawaii for that.) I thought my kids would love to explore lava tube caves…and I was right!

Let’s start out with some tips: before you head to the park, make sure you are wearing long pants and closed-toed shoes, at a minimum. I’d also recommend gloves, kneepads, and helmets, which you can purchase at the Visitor Center.  The Visitor Center should definitely be your first stop. In addition to purchasing bump hats (about $6) and gloves (about $4), make sure you buy the guide booklet (about $7) that contains maps of the cave. Trust me, you want the maps.  Flashlights are loaned free of charge from the Visitor Center, so pick up some of these too (they’ll note your driver’s license and license plate numbers). While you’re there, the Visitor Center also has a few exhibits to explore. 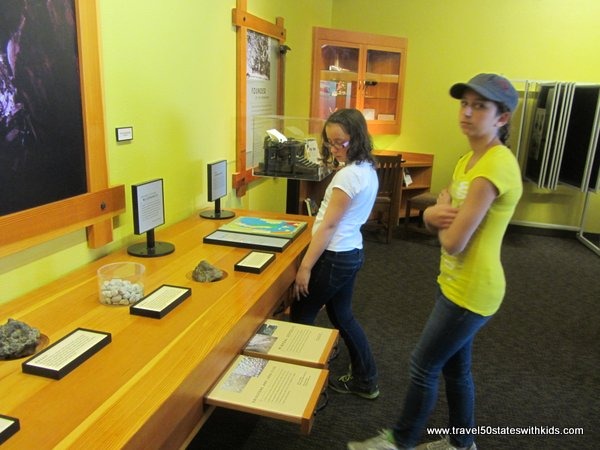 A good first cave to explore is Mushpot Cave, which is located a short walk behind the Visitor Center. It is the only cave that has lighting and does not require a flashlight. 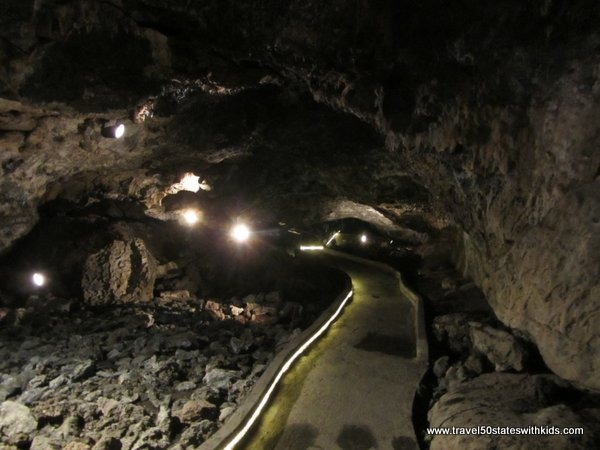 Inside the cave are informative signs that point out different types of lava formations within the caves. 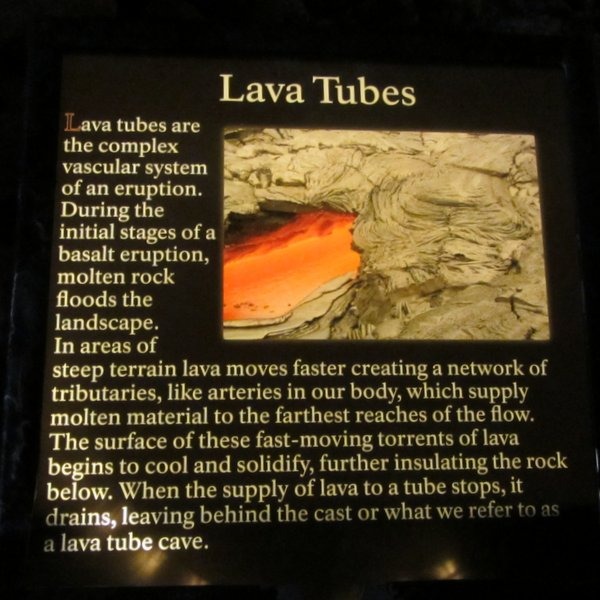 The trail to the cave was also educational. You can experience firsthand how lava rocks can have different densities. Either this pumice has a very low density or my son has superhuman strength. 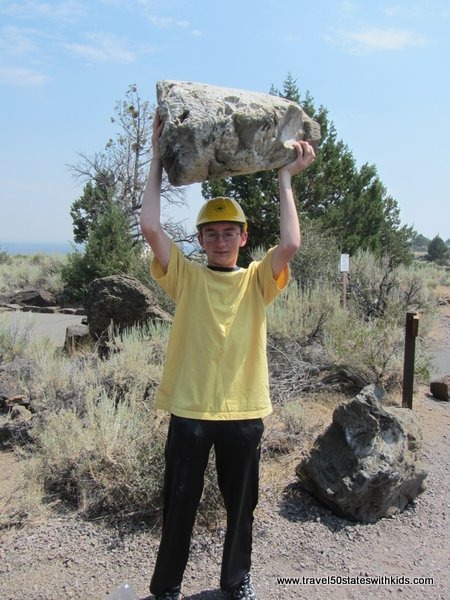 After leaving the Visitor Center, you can drive a loop through the park and explore some of the caves. A park-published brochure categorizes the caves into Least Challenging, Moderately Challenging, and Most Challenging. Reading these descriptions will help you decide which caves to tackle with your family.

A staircase descends into most of the cave openings. 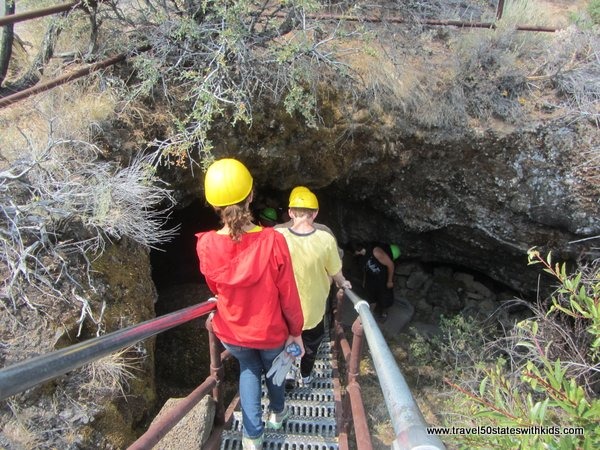 The lava tubes have a wide range of sizes. Some of the tubes were quite large and you could easily walk through them without ducking. 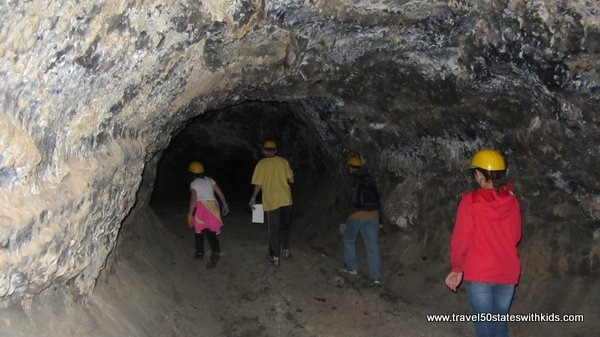 The large entrance chamber to this cave features a pillar in the middle. 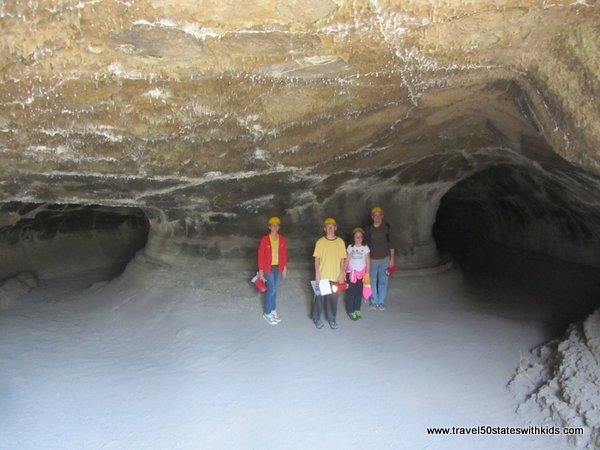 Then there were other tubes that were a much tighter squeeze. 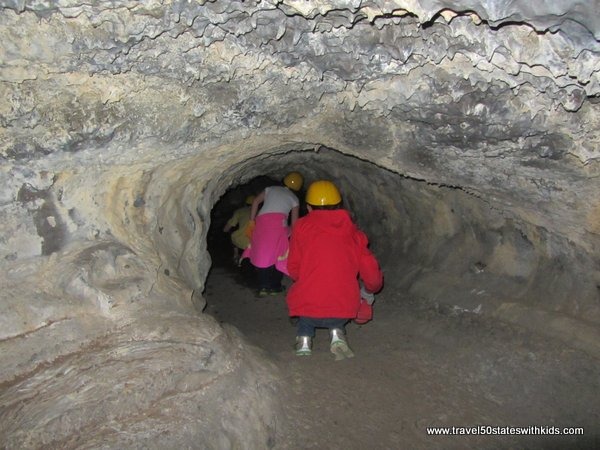 And some were too small for me to attempt to crawl through, but they didn’t stop my kids. 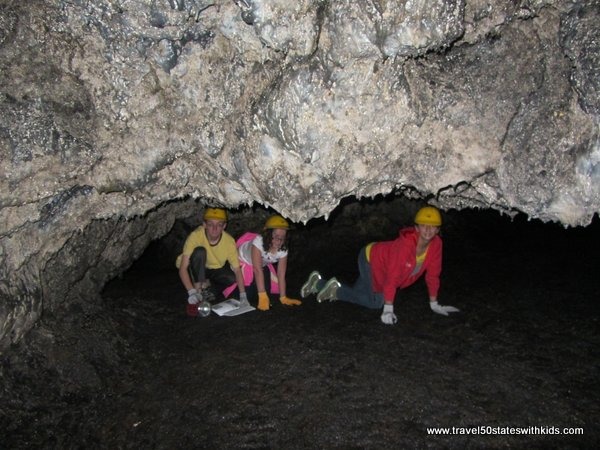 Some of the caves had a relatively smooth floor. Others had a rough surface (the reason for the kneepad recommendation). 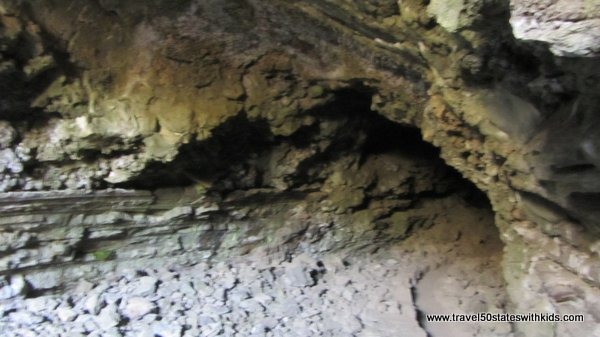 Some of the tubes required a boost to reach. 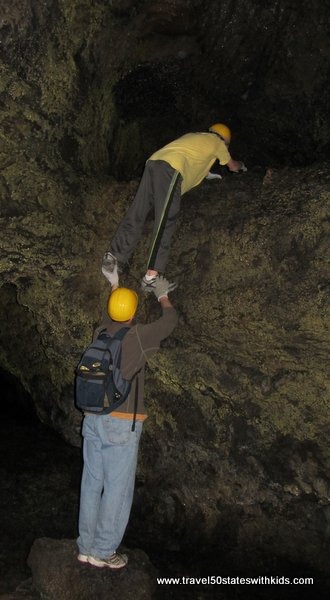 It took me a while to figure out how to take pictures in the caves. The previous pictures were all taken with a flash, and while you can you see the caves, the pictures are misleading because it doesn’t show you how dark it is inside the cave. After a while, I got the hang of it, so these next pictures give you a better feel for what it is like exploring a cave by flashlight. 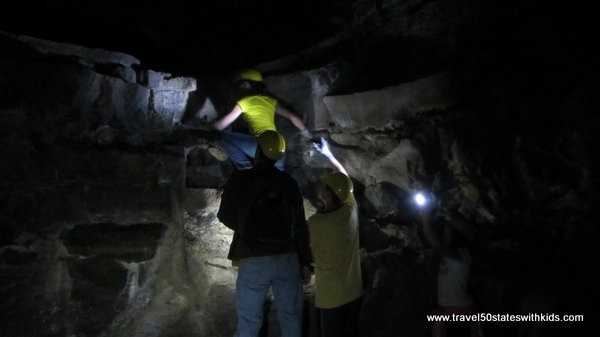 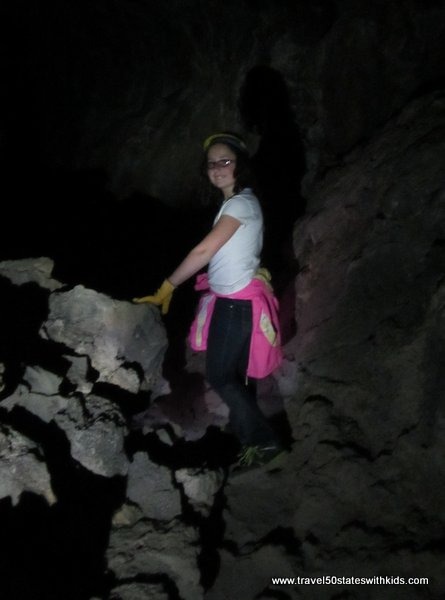 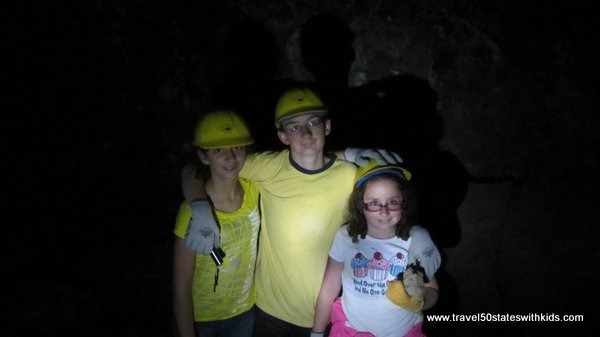 What my kids really loved about exploring the lava tube caves at Lava Beds National Monument was that we got to do it on our own. We weren’t restricted by a guided tour. It certainly makes the experience more adventurous. However, I can’t stress this enough: buy the maps. You don’t want to get lost in a cave. We encountered one family that did get lost in cave with a figure-8 passage. They circled the back half of the figure 8 three times before we showed them how to get out of the cave.

Valentine Cave was recommended to us by the rangers as a family-friendly cave. There was a larger main passage that was perfect for parents and smaller, more adventurous, parallel passages that the kids could go through, then meet up with us.

In addition to the underground features of this park, there are trails you can hike where you can see cinder cones and other volcanic features. Another completely separate feature of the park that is worth a stop is Petroglyph Point. Here you can see several Native American drawings. 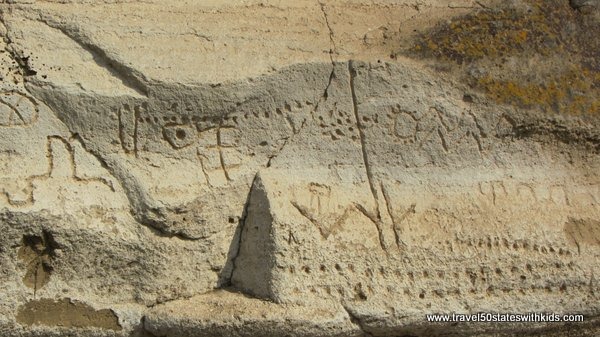 There aren’t very many places to stay near Lava Beds National Monument. I recommend staying at Hawk’s Nest Tionesta, a Cabin and RV Park. It is the closest lodging to the park, about a 15-minute drive. We stayed in the Bunkhouse, which was cute and cozy. In addition to the bedroom, it had a kitchen and dining area, but not a bathroom. However, it was close to the the restroom and bathhouse (which was very clean). 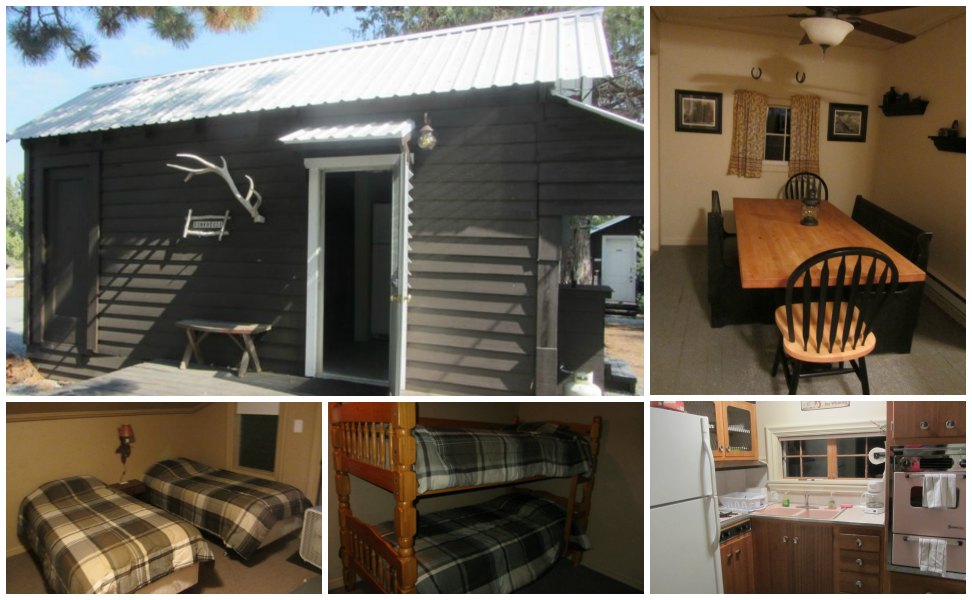 The property has a rec area with a firepit, horseshoe game, and a swingset. 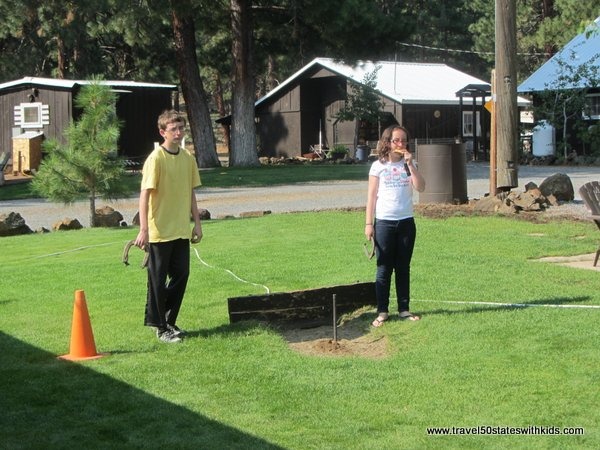 I had the opportunity to tour some of the other cabins, including another family cabin. Each was different and all had that rustic charm to them.

Hawk’s Nest Tionesta also has a country store which we didn’t have time to check out, along with laundry facilities. We were also thrilled to spot some deer in the morning before we left for Lava Beds National Monument.

Many thanks to Hawk’s Nest Tionesta for offering my family a complimentary one-night stay at their property.