We used to live an hour’s drive from San Francisco, but my older two kids were too young to remember it and my youngest hadn’t been born yet, so I was looking forward to taking them to see the city again. One of my sisters lives nearby in Oakland and we stayed at her house. She was the one who recommended that we tour the city via a hop-on-hop-off bus. I Googled it and found that several companies offered these tours. It took a while to sort through them and figure out which company offered the most comprehensive tour. I selected City Sightseeing San Francisco because they offered several different tour loops and had an option to add on a tour of Muir Woods National Monument. I contacted City Sightseeing and was pleased that they offered my family complimentary tickets so that I could research and write this article. 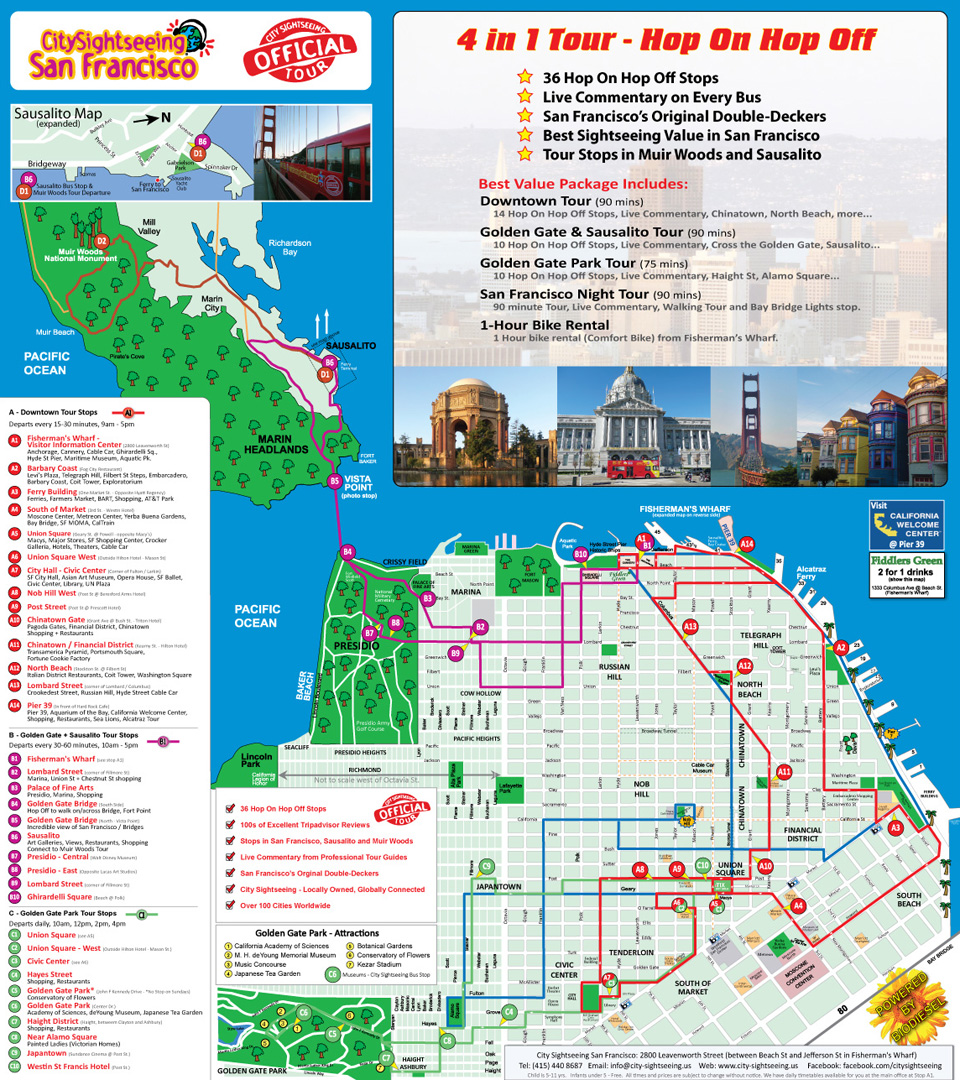 On Day 1 of our tour, we took a BART train from Oakland, then walked to Union Square where we caught the bus. I admit that even I found it a bit confusing with so many different bus companies with similar names. We found the bus for the Downtown Tour and boarded. 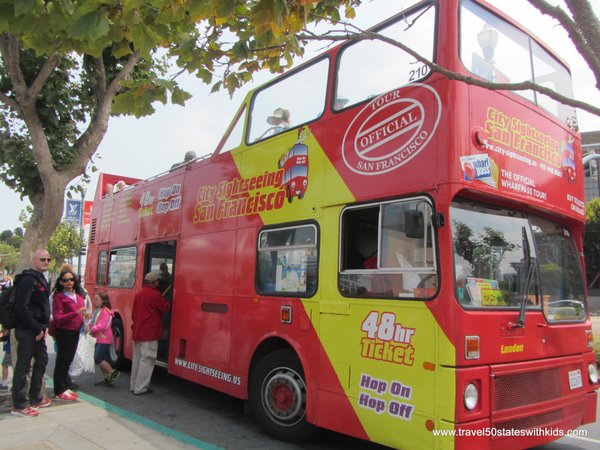 The buses used for the downtown tour are the double-decker buses with an open air top level. There are seats on the lower level, but the best view is on the top. 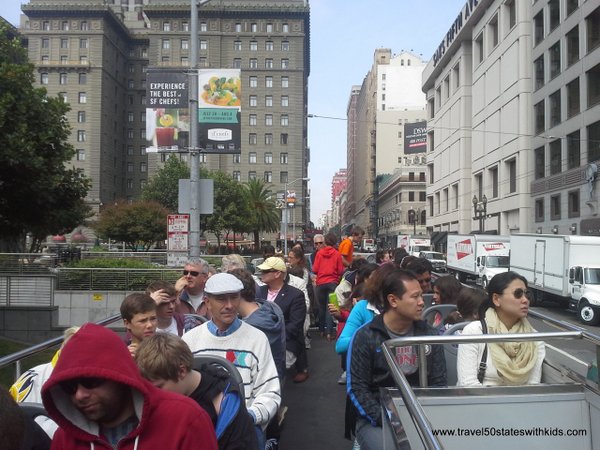 The Downtown Loop provides an excellent overview of the city. Not long after we boarded, we spotted a Cable Car. 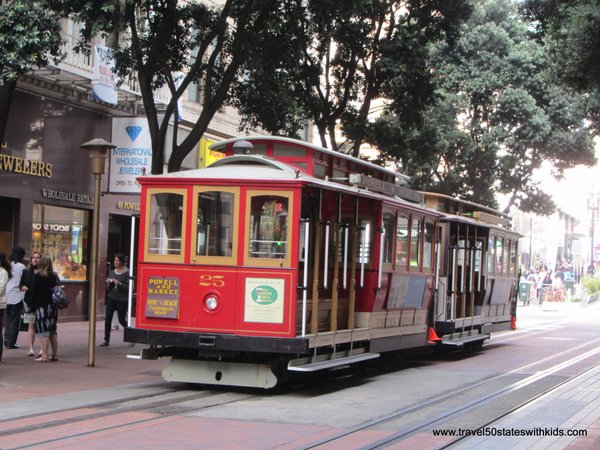 Although you can hop off at whichever stops you choose, you won’t have time to hop off at all of them, so it is best to plan ahead of time what your top priorities are. As much as I would have liked to see San Francisco’s City Hall in more detail, we only stopped long enough for a picture. 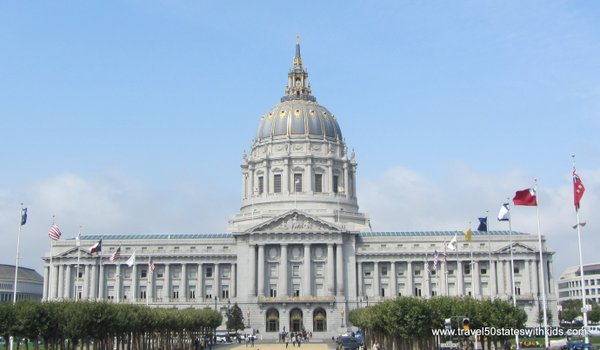 Also near that stop are the Asian Art Museum, Opera House, Ballet, Civic Center, Library, and UN Plaza. The first stop where we hopped off was the Chinatown Gate. 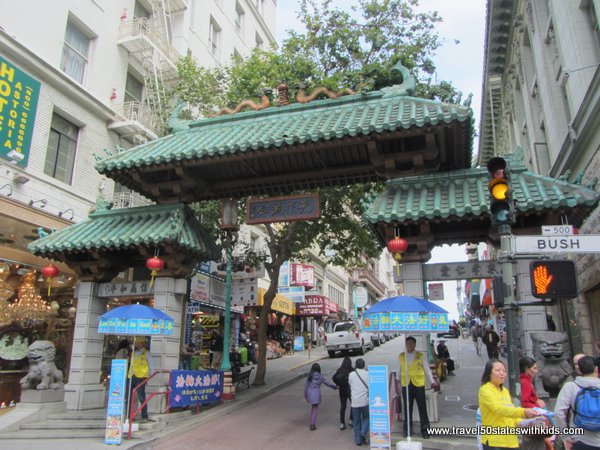 We had so much fun in Chinatown that I’m going to devote a separate post to it. There are two stops in Chinatown so we hopped off at one, walked to the other, then waited for the next bus. Our tour provided plenty of opportunities for my son to bond with my little nephews who think he’s really cool. 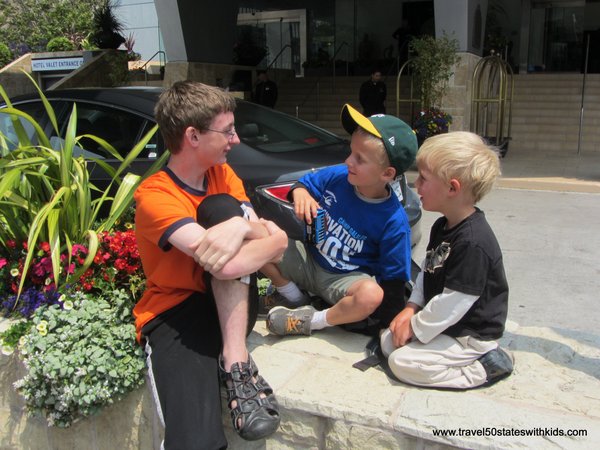 Shortly after that, we saw a nice view of the Transamerica Pyramid. 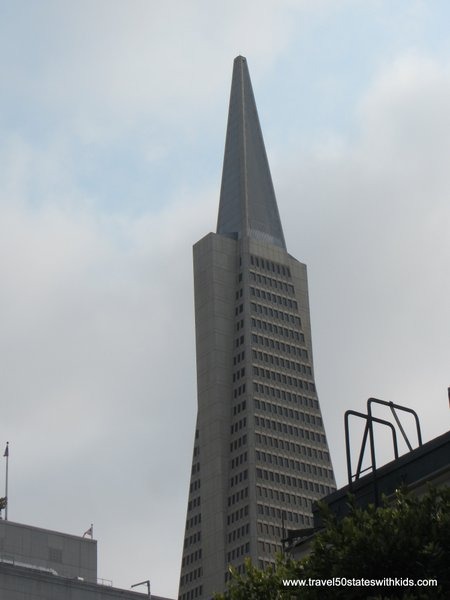 We also drove past Lombard Street, which we learned is not really the crookedest street in the world, although it is called that. 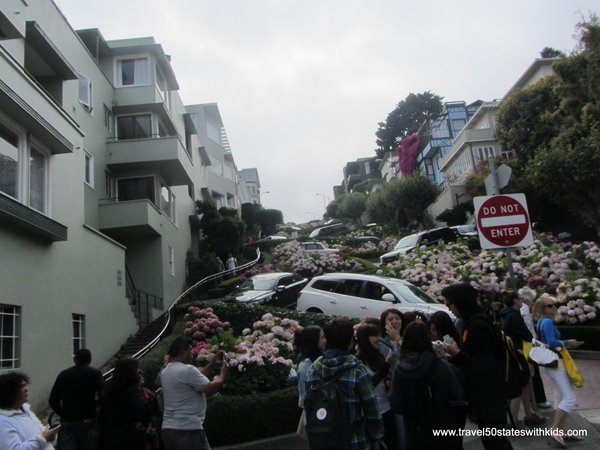 Our next hopping off point was Pier 39. From there we walked to Fisherman’s Wharf. This stop merits a separate post also. 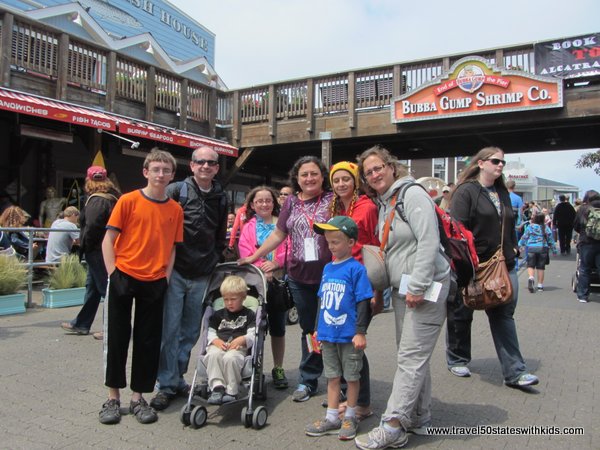 By the time we finished exploring Fisherman’s Wharf, the Downtown Tour had finished operating for the day, so we hopped on the first “Night” Loop of the evening which left at 6 p.m. from Fisherman’s Wharf. As you’ll see from the pictures, there was still plenty of daylight, so it wasn’t really a “night” tour. 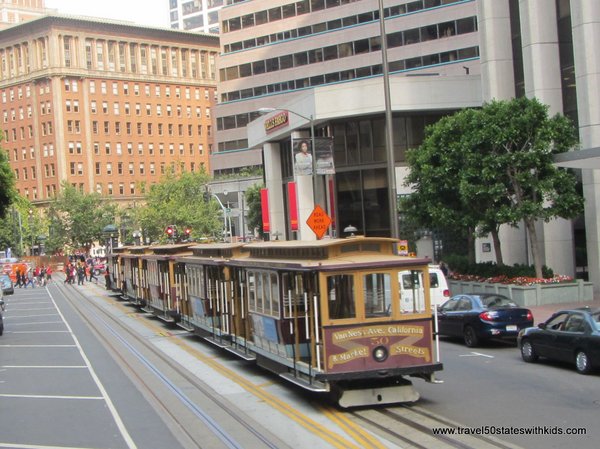 The Night Tour included some of the same points of interest we’d seen on the day tour, plus some new ones. We didn’t hop off at all on this tour; we just enjoyed the sights and commentary. The tour went past Union Square again, but our driver was kind enough to make an extra stop that was even closer to the BART station. 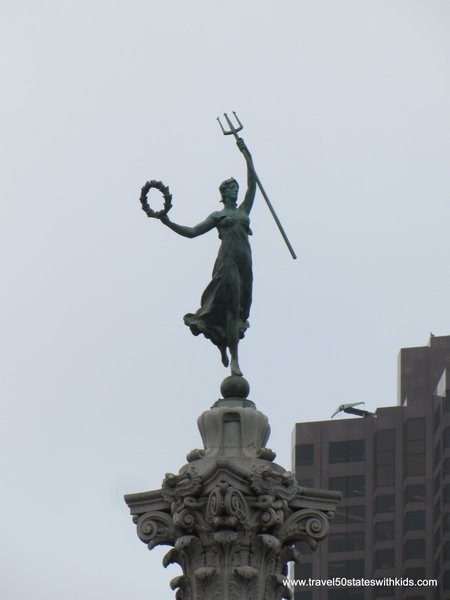 The next day we planned to do the Golden Gate / Sausalito Tour and the Muir Woods Redwoods Tour. In order to do both of those, it is important to board the first or second bus leaving from Fisherman’s Wharf. Instead of taking the BART into the city, we decided to drive.  Parking can be very expensive in the city, so we were thrilled to find a parking lot that had a special price of $9.50 for all-day parking as long as you entered by 9:30 a.m. The buses that go on these routes are different than the double-decker buses used on the city tours. The buses look like school buses with the back 2/3 of the top cut off. You still have the open-air experience, but aren’t quite as high up in the air. Additionally, the driver also serves as the tour guide. 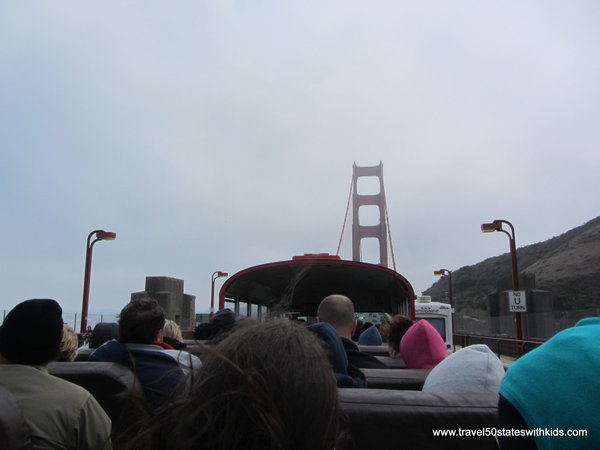 Riding across the Golden Gate Bridge in the open air was an exhilarating experience. We had some fun taking pictures. 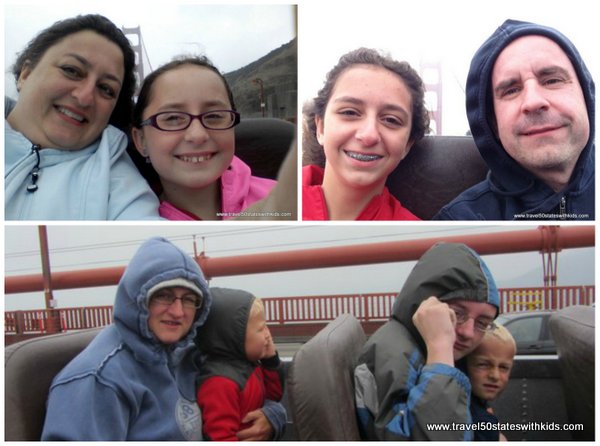 These pictures are reminding me that I need to remind you to bring a jacket on this tour! Our driver made a brief stop so we could get out and take pictures of the bridge. 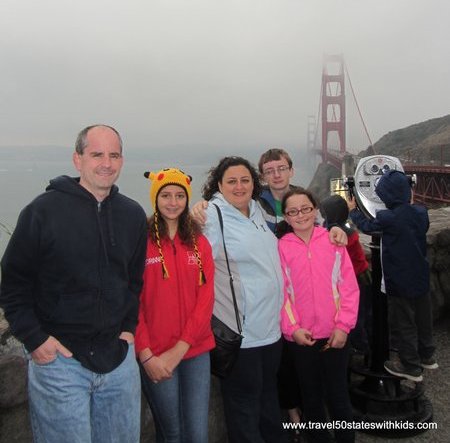 We hopped off the bus in Sausalito where we had one hour to explore before the bus to Muir Woods departed. 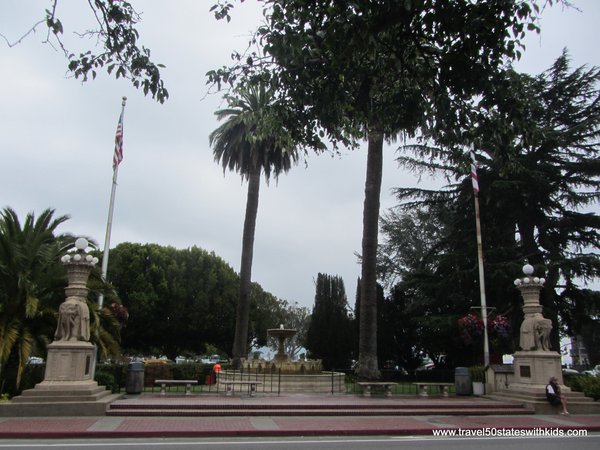 We explored a few shops and stopped in a pizza place for an early lunch. My daughters loved a cute sock shop with an even cuter name: Soxalito. 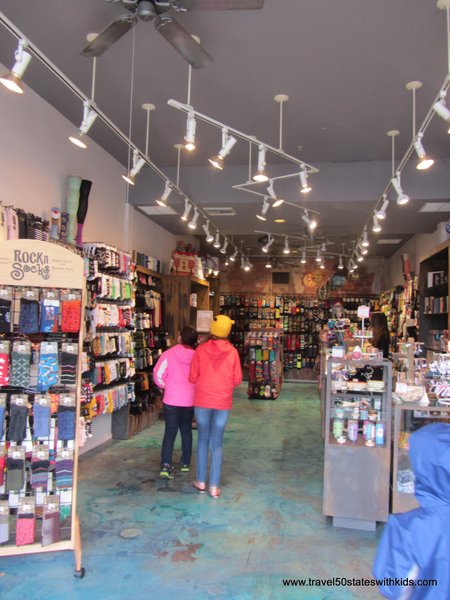 The hour flew by quickly, then we were on our way to Muir Woods. I love this picture of my nephew looking up in wonder at the tall redwood trees. 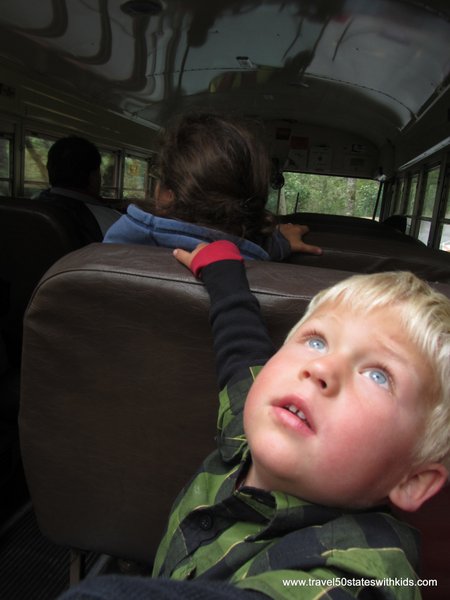 I’ve already written about our visit to Muir Woods. 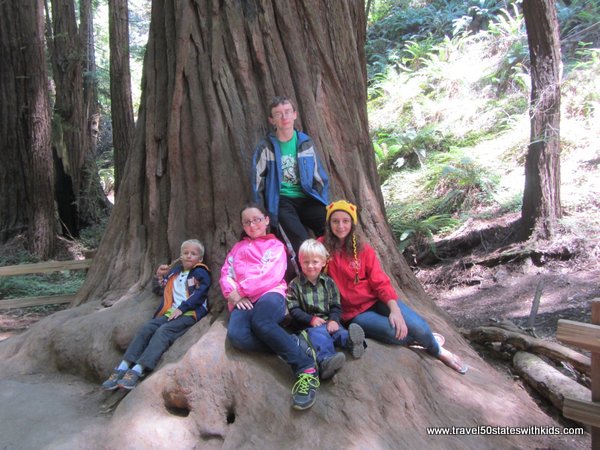 With the timing of the buses, we had two hours to explore Muir Woods before we had to hop on the bus to get back to Sausalito and then back to Fisherman’s Wharf. I should mention that if you want to walk across the Golden Gate Bridge, there are stops to hop on and off on both sides of the bridge. We decided to ride across, but someday I would like to walk it. Other stops on the way back to Fisherman’s Wharf include the Presidio and Ghiradelli Square.

As I mentioned above, with only two days, we did not have time to do the Golden Gate Park Tour bus loop which runs until 4 p.m. Fortunately, we had our car on the second day and were able to drive to Golden Gate park after the completion of our bus tour.