Dayton, Ohio: Where the Wright Brothers invented the airplane

Dayton, Ohio: Where the Wright Brothers invented the airplane

A wealth of sites related to Dayton’s aviation history make it a go-to destination for aviation enthusiasts. Most people know the Wright Brothers’ historic first flight took place in Kitty Hawk, North Carolina. But did you know they invented the airplane back home in Dayton, Ohio?

Read on for an itinerary that will guide you through Dayton’s top aviation attractions. 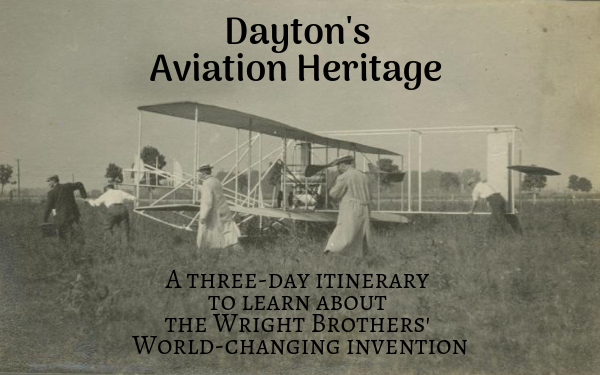 The best place to start your visit is the Dayton Aviation Heritage National Historical Park. It consists of two interpretive centers in different locations. Begin at the Wright-Dunbar Interpretive Center & Wright Cycle Company Complex. A film about Wilbur and Orville Wright provides an overview of their early careers and their process of inventing the airplane. Don’t miss it; it will enhance your visit.

After that, explore the interactive exhibits throughout the interpretive center. Next, visit their print shop and one of their bicycle shops which are located in adjacent buildings. You will learn valuable lessons about the Wright Brothers’ trials and errors while inventing the airplane.

It isn’t necessary to take a tour on your visit to Wright-Dunbar Interpretive Center, but the Rangers are very knowledgeable and provide valuable insight. Interpretive programs are offered in the summer months at 10:30 a.m. 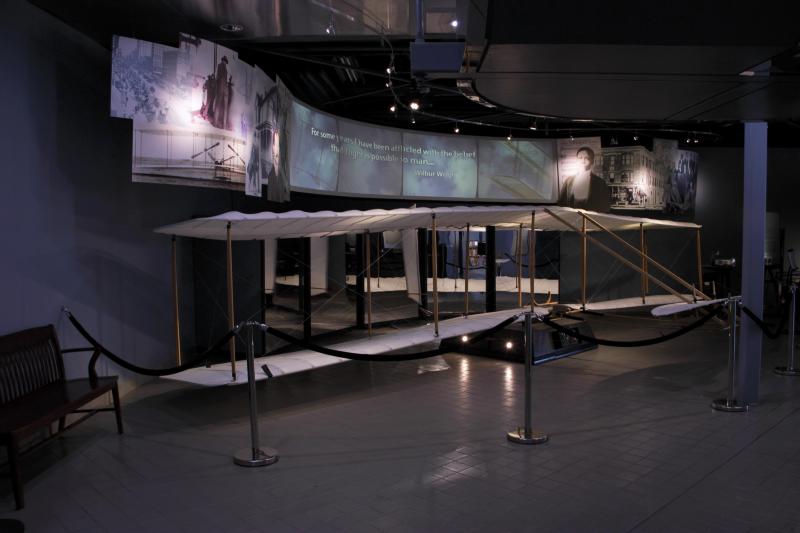 After a lunch break, drive over to the Huffman Prairie Flying Field Interpretive Center. This center is located near the field where the Wright Brothers conducted flying experiments after their success at Kitty Hawk. The exhibits focus on the continuing story of the Wright Brothers and the advancement of aviation.

After succeeding in making a plane fly, their work wasn’t over. They still had to figure out how to make it maneuverable. Once they had a practical airplane, they then had to turn it into a successful business venture. That included not only selling planes but also teaching their customers how to fly them.

Be sure to view the exhibits that show their different airplane models and their company catalog.
Additional exhibits cover continuing advancements in aviation made at Wright-Patterson Air Force Base.

Start the day by paying your respects to Wilbur and Orville Wright at their final resting place in Woodland Cemetery and Arboretum. There you will also find the graves of their sister Katharine Wright Haskell, and their parents Bishop Milton Wright and Susan Koerner Wright.

After you pass through the main entrance gate, stop at the office on the right and pick up a map of the cemetery. Use the map to navigate to the Wright Brothers’ Lot in Section 101. You can either drive or walk there. A small sign points the way from the road. Look for the flags to find the site.

Be sure to look for the brochure in a holder near the grave marker. It provides a brief and interesting summary of the lives of the Wright family. Don’t miss the fascinating account of the mother of the Wright Brothers.

If you have time, stop to appreciate the view from Lookout Point (the highest point in the city) and see the gravesites of some of the other notable people buried in the cemetery, including poet Paul Laurence Dunbar and writer Erma Bombeck. 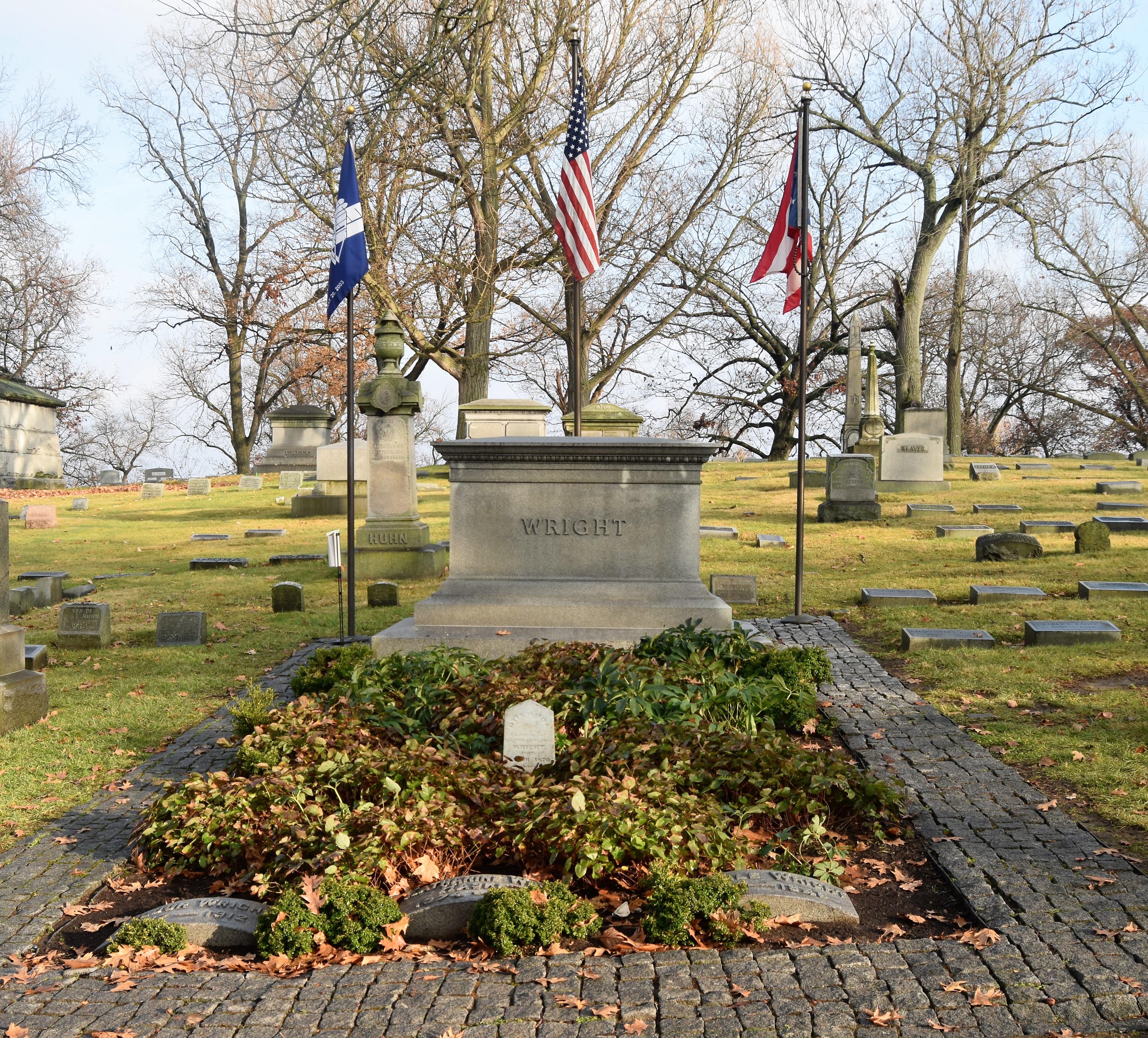 Did you enjoy learning about the Wright Flyer III on Day 1? Then go see the real thing on Day 2 at Carillon Historical Park. 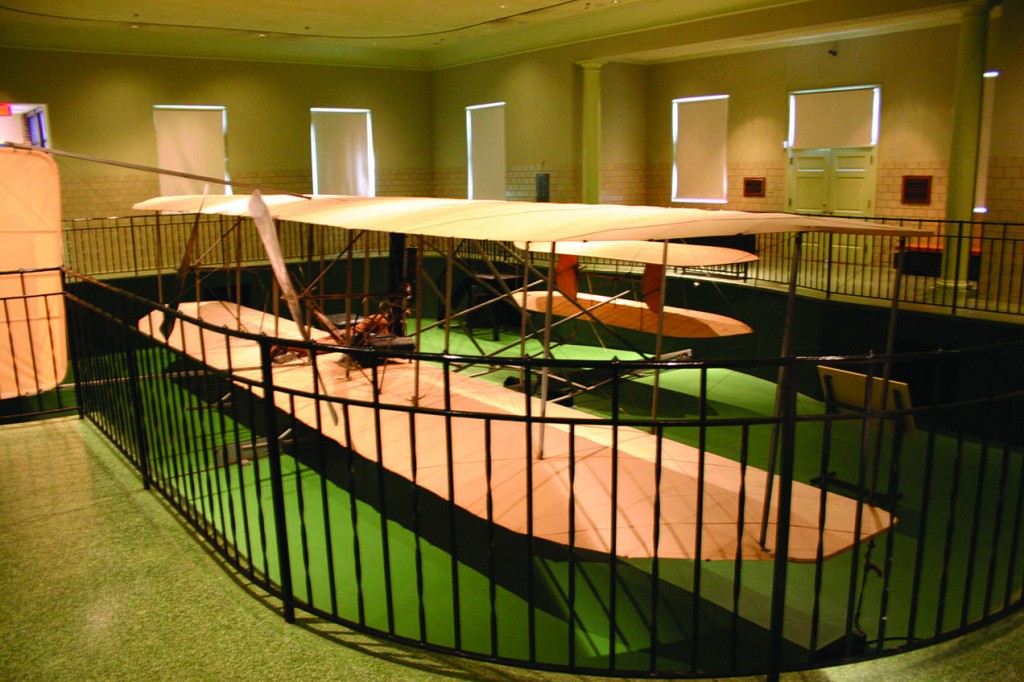 Dayton’s rich history of invention is celebrated at Carillon Historical Park. Expect to be inspired! This living history museum is set up like a village with over 30 historical buildings filled with exhibits.

The world’s first practical airplane, the original 1905 Wright Flyer III, is the most notable feature and a National Historic Landmark. Wilbur Wright flew this airplane on October 5, 1905, for 39 minutes 23 seconds. This was longer than all the flights of 1903 and 1904 combined. Be sure to see the other Wright Brothers exhibits which include one of their Cycle Shops and some family artifacts.

Other famous Dayton inventions that are on display include the cash register and automobile self-starter. At one time, Dayton had more patents per capita than any other U.S. city. The Heritage Center highlights Dayton’s history of innovation over a 150-year period.

Other exhibits focus on early settlement, transportation, printing, the Great 1913 Flood and the area’s geological history.

If you visit on a Wednesday or Saturday, purchase an upgraded ticket which includes a tour of Hawthorn Hill, the final home of Orville Wright.

The park includes a café and the 1850s-style Carillon Brewing Co., making it easy to spend a full day (and maybe the evening) there. 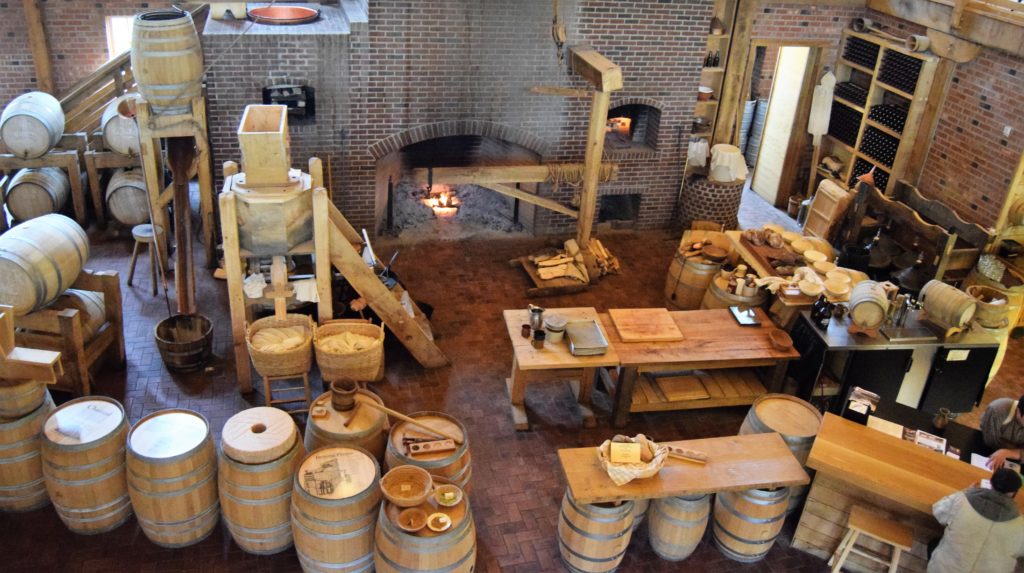 Carillon Brewing Company is a must-see for travelers who enjoy both history and craft beer. Step back in time to 1850s Dayton, Ohio, and watch as beer is brewed right in front of you. Costumed staff members brew beer using the methods, equipment and recipes that were used back then. You’ll see open copper kettles and oak barrels rather than stainless steel tanks. Carillon Brewing Company holds the distinction of being the only brewery in North America that is owned by a museum. Staff members and volunteers are happy to answer questions.

Not only can you enjoy beer the way 1850s immigrants did, you can enjoy a meal with recipes inspired by the English, German and Irish settlers. Try a German pretzel braid, schnitzel, wurst, or fish and chips with your beer. Beers rotate seasonally, although their most popular, Coriander Ale, is always available. Try a flight of four beers to sample the different varieties.

Day 3: From the Wright Brothers through Stealth Fighters

Make sure you wear your most comfortable pair of shoes for your visit to the National Museum of the United States Air Force. This immense museum has over 19 acres of exhibits with free admission. About a million people each year visit this attraction which is the world’s oldest and largest military aviation museum.

This world-class museum has more than 360 aircraft and aerospace vehicles. It is located at Wright-Patterson Air Force Base not far from where the Wright Brothers tested their airplanes. Admission is free. The museum exhibits are organized chronologically, starting with, not surprisingly, the Wright Brothers.

You’ll see a unique view of American history through the lens of aviation development. The first of four buildings covers early aviation through World War II. Aircraft from the Korean and Vietnam Wars are found in the second building. The third building covers the Cold War era, after which is the Missile Gallery. The fourth building has presidential aircraft, modern and experimental aircraft, and space exhibits. 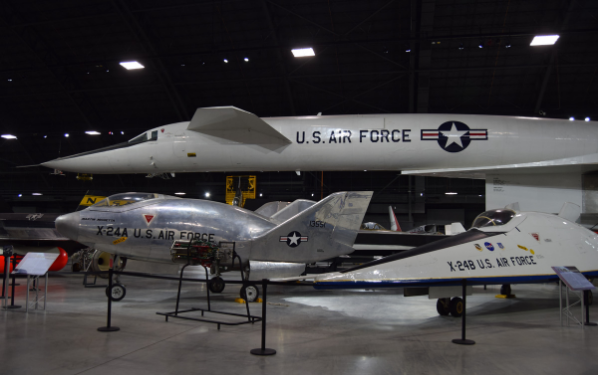 Most of the aircraft are for viewing only, but there are several (mostly in Buildings 2 and 4) that visitors can walk through. Don’t miss the airplane that carried the body of President John F. Kennedy after his assassination. Walk through the airplane and in the spot where Lyndon B. Johnson was sworn in as the next president (Building 4).

Take one of the free guided tours that are offered daily or tour the museum at your own pace. Audio tours and podcasts are offered by the museum. Don’t hesitate to ask questions of the museum volunteers. Many of them are retired Air Force personnel who are happy to share their wealth of knowledge.

Be sure to try out some of the interactive displays, cockpit sit-ins, simulators and virtual adventures that are scattered throughout the museum. (Some have a fee.) When you get tired of walking, watch a movie in the 3D theater that has an 80-foot screen (for a fee). Shop in the museum store which offers souvenirs and books about aviation. Two cafés offer lunch and snacks, making it easy to spend the entire day (or multiple days) here.

If You Have More Than Three Days

If you want to take your time and see everything at the National Museum of the United States Air Force, consider adding an extra day or even two.

The museum is filled with exhibits and artifacts that tell the story of Neil Armstrong and other Ohioans involved in the space program. Kids and adults enjoy interactive exhibits and simulators. Don’t miss one-of-a-kind artifacts including a Gemini VIII spacecraft, Neil Armstrong’s Gemini and Apollo spacesuits and an Apollo 11 moon rock. 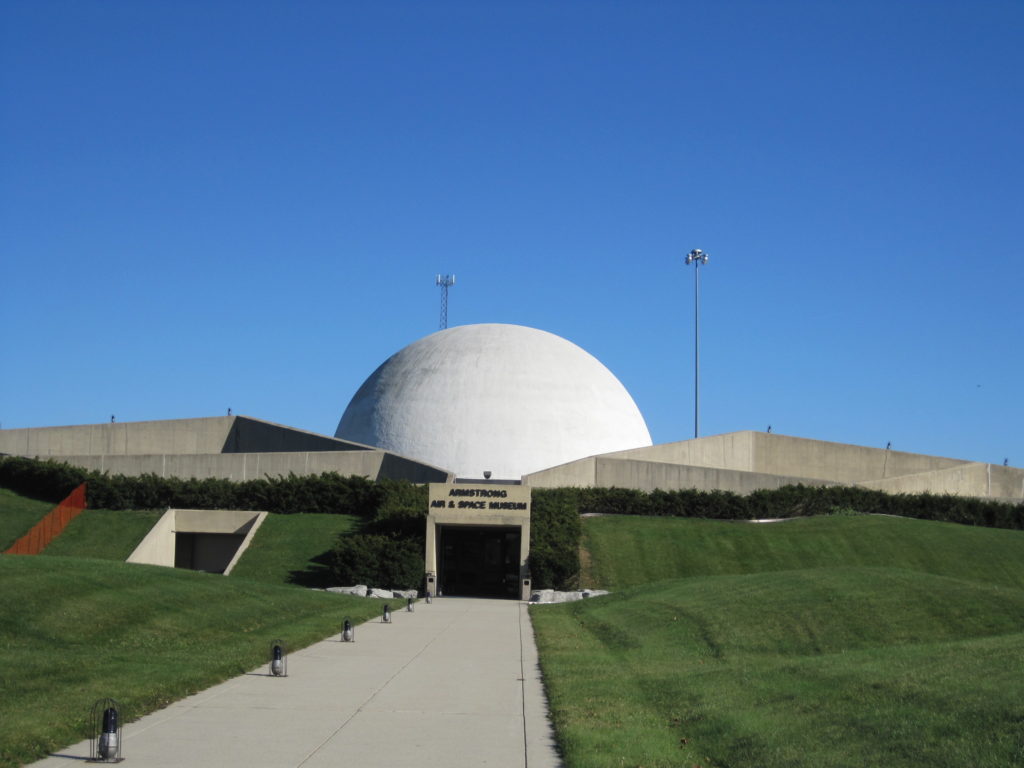 Would you like me to put together an itinerary that includes all of this, plus Dayton’s non-aviation attractions? Let me know!  I’d be happy to help you plan a trip to Dayton, Ohio or any other destination.