As we were planning our DC vacation, I read descriptions of various attractions to my family and they rated each attraction on a scale of 1 to 10. My kids’ first impression when I mentioned the Bureau of Printing and Engraving was, “Boring!”  Then, when I read the description and explained that this was the factory where they print money, they were suddenly a lot more interested. 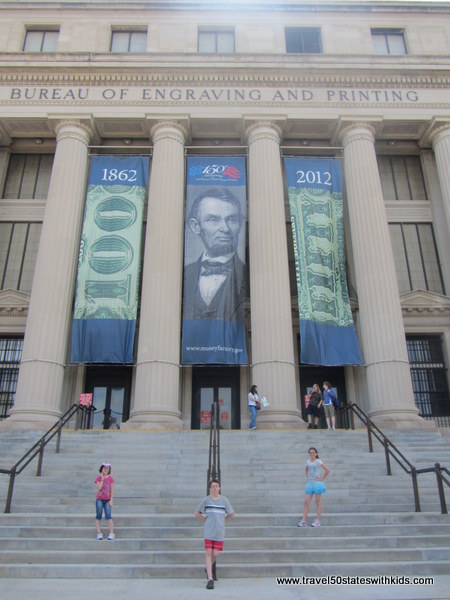 First things first, let’s talk about getting tickets, which are free, by the way. If you want to visit during the non-peak season (September – February), no tickets are required. From March through August, tickets are required. There are two ways to obtain tickets. You can request tickets in advance through your senator or congressman. These tours take place early in the morning or later in the afternoon. The other option is to get same-day tickets on site at the ticket booth. The Bureau of Engraving and Printing is located adjacent to the memorials and not far from the Smithsonian Metro stop.  On the map below, it’s on the right side, about halfway down.

But, it’s a big building, and it wasn’t clear to me on any map which was the front of the building. Once we were there, I found a sign with a map that I found very helpful. It shows the location of ticket booth and tour entrance, which are on opposite sides of the building. Just note that on this map, north points to the right. 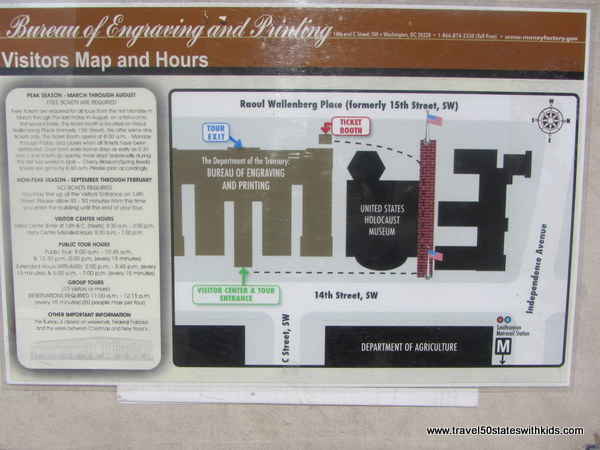 The ticket booth opens at 8 a.m. The tickets you receive at the ticket booth are for a specific tour time. You will have a choice of which tour times that are still available. It is advisable to go to the ticket booth as soon as it opens because they do run out of tickets. According to their website, during the busy weeks of cherry blossom time, spring break, and Easter, you should plan to be in line no later than 6:30  or 7 a.m. We got in line at 8 a.m. (during a June visit) and the first available tickets were for 9:15 a.m. One person can get up to four tickets. This is important:  if you have more than two kids, one of the parents can bring one of the children and they can get up to eight tickets, while the other parent sleeps in a little longer with the other kids. But one parent can’t get 5 or more tickets without bringing a child along. If you are planning your trip in advance, it would be significant less complicated to request the congressional tickets in advance. You’ll have a tour at 8:15 or 8:45 a.m., then the rest of your day will be free for other activities.  When we visited, we also made a morning stop at the Daniel’s Story exhibit at the adjacent Holocaust Museum, had lunch, then spent the rest of the day touring the memorials.

The tickets will tell you to arrive at least 10 minutes early for your tour. This is a good idea, because when you arrive for your tour, you will first be admitted into a waiting area that has exhibits to view. This set of models shows how the printing process works. First, grooves are cut into the printing plate. 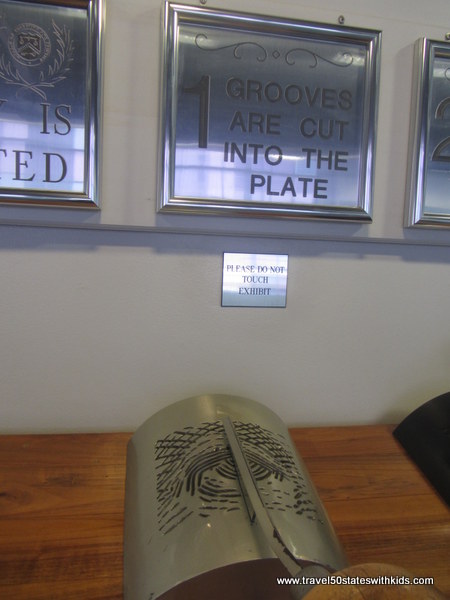 Then, ink is rolled onto the plate. 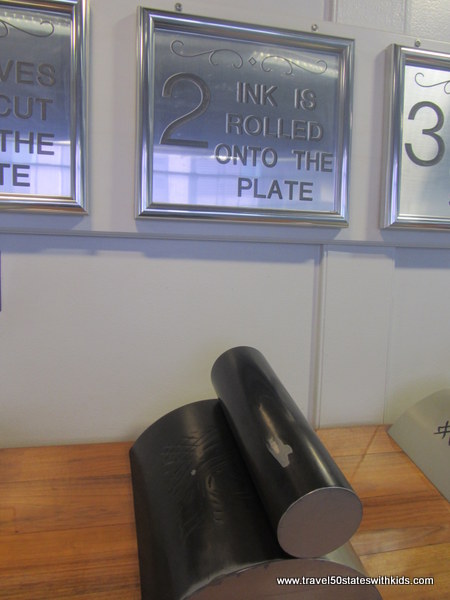 Then, the excess ink is scraped off the plate. 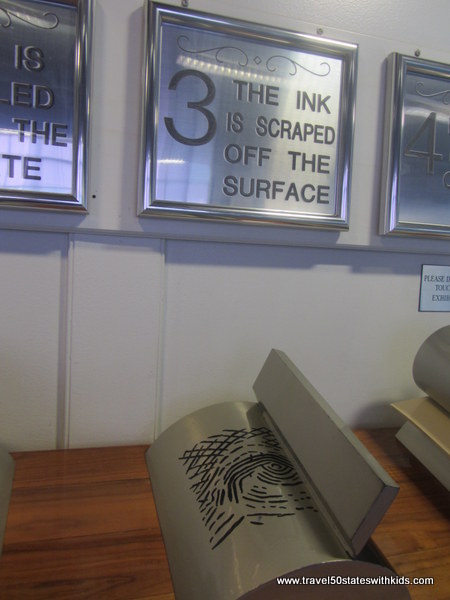 The paper is pressed onto the plate. 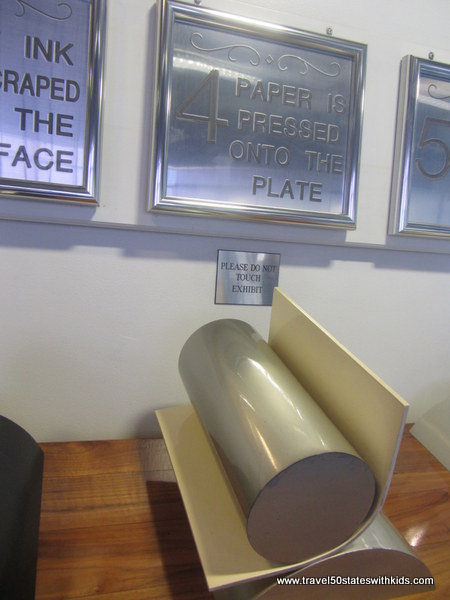 The ink in the grooves is transferred to the paper. 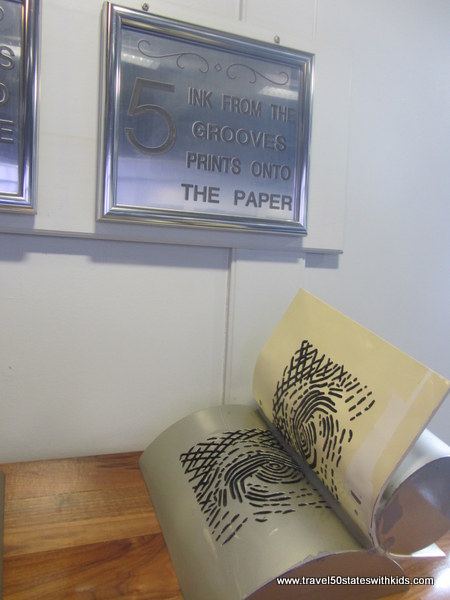 This area also has several posters that describe the history of currency in general and in the United States. 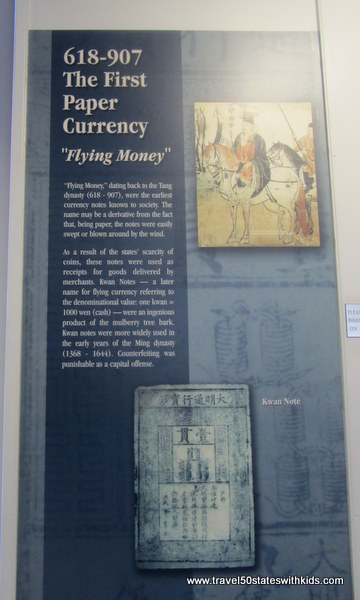 Currency didn’t become green in the United States until 1861, when greenbacks were born. 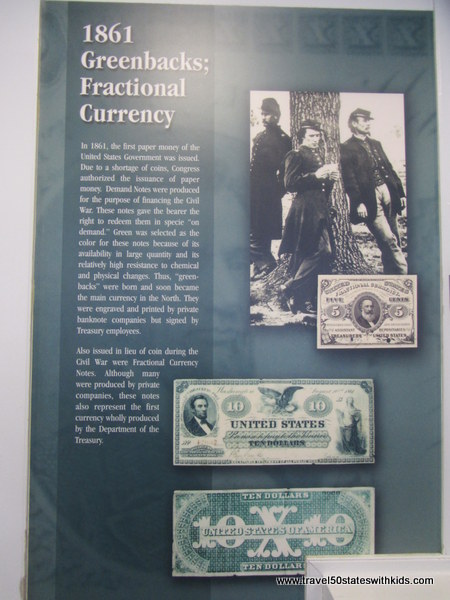 These are just a couple of the many informational posters.

Have you ever wondered what a million dollars looks like? You can see it yourself in $10 bills. 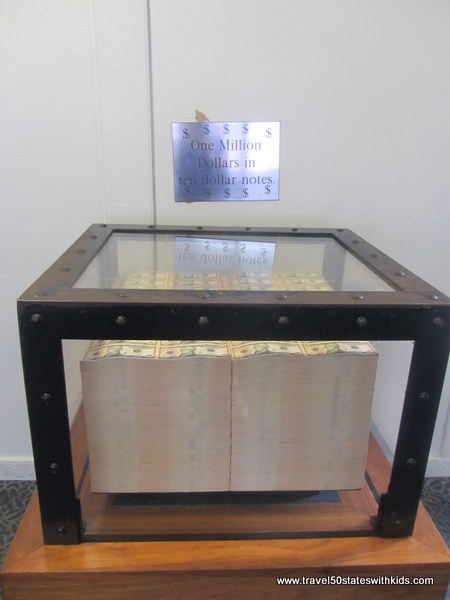 You can also learn about security features of today’s currency that prevent counterfeiting. 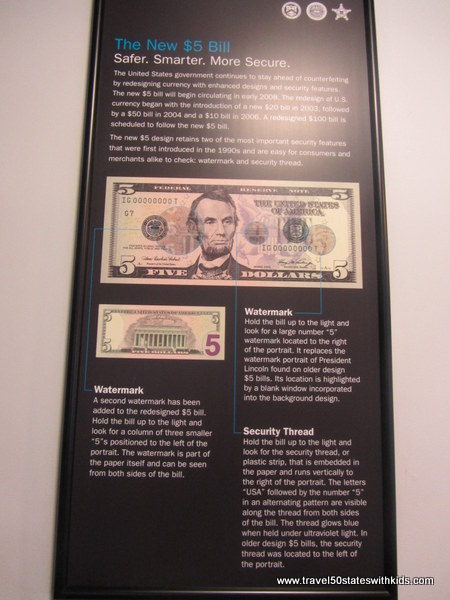 Speaking of security, a place like this obviously has a lot of security measures in place. Even so, would it make you nervous if a guy like this was on your tour? 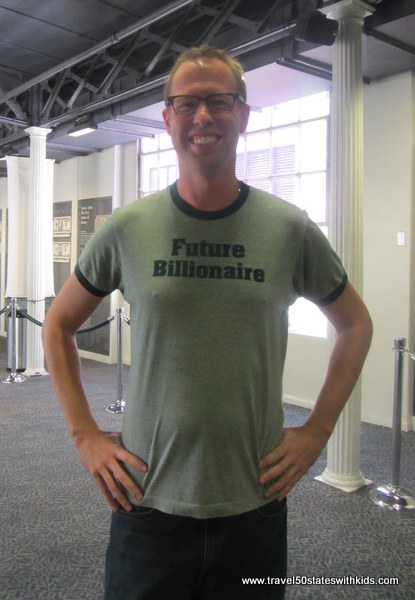 I had to ask him exactly how and when he was planning to become a billionaire. Fortunately, he hadn’t planned to obtain the money through force during our tour. 🙂

A short introductory film (7 minutes long) is shown before the start of the factory tour. During the tour, we were at the end of the group and because of the way the tour was conducted, we found that it was easier for us to ask questions than it was for the people at the beginning of the line. Photography is not allowed in the factory. Fortunately, the bureau supplied me with and gave me permission to use these next several pictures so that you can see the actual process.

After the tour, plan to spend a few extra minutes checking out the Visitor Center. It contains even more exhibits and a large assortment of souvenirs. The exhibits show the evolving design of U.S. currency notes, counterfeit protection measures, and a fun display titled “How tall are you in $100 notes?”  My son is not quite $1.5 million tall. 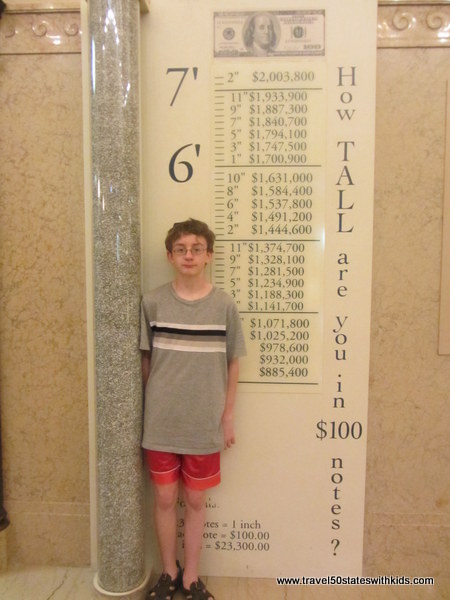 Several fun money souvenirs were for sale in the gift shop. Our standard souvenir on our travels is a Christmas ornament. It’s a fun way to remember all of our trips every year. We thought a great way to remember our trip to the Money Factory would be an ornament with shredded money in it. 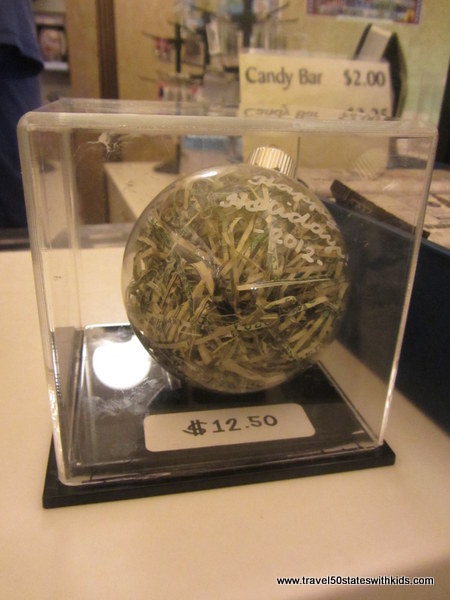 We really enjoyed our tour, but my older kids found it more interesting than my youngest. Having worked as an engineer before becoming a writer, I love factory tours.

A second facility is located in Fort Worth, Texas, and it also offers tours.