Do you know the name of the world’s first theme park? Disneyland? Guess again. In 1946, nine years before Disneyland opened, Santa Claus Land opened in Santa Claus, Indiana. In 1984 it was renamed Holiday World when Halloween and Fourth of July sections were added. Since then it’s grown even more with the addition of a Thanksgiving section and a water park. We visited the park on a beautiful September weekend. The water park was already closed for the season, but we got to take advantage of Happy Halloween Weekends, with special fall activities that are not available during the summer months. The park was beautifully decorated with displays of pumpkins and other fall decor. 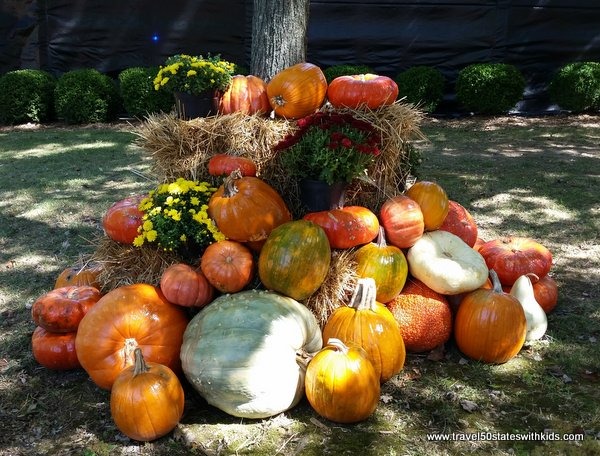 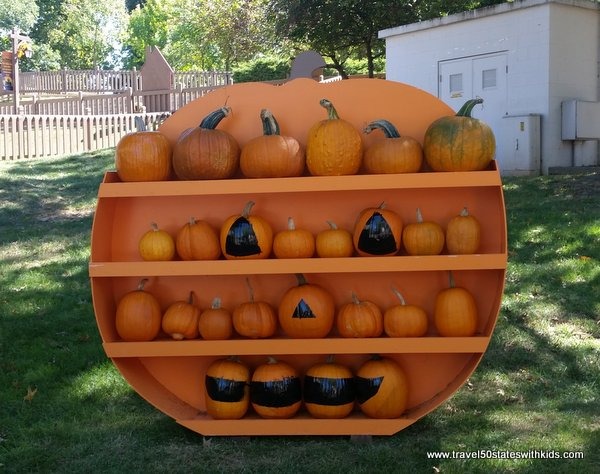 We were excited about riding the award-winning roller coasters at Holiday World, so we headed to the Halloween section of the park where two of the three coasters are located. But before we could get to a coaster, the kids spotted the Scarecrow Scrambler and wanted to ride it. (I happily volunteered to sit this one out in order to take pictures because I don’t like rides that go around and around.)

Then we took on The Raven and The Legend, both wooden roller coasters. Both were great fun. The Legend had higher hills than The Raven, but both were high thrill coasters. 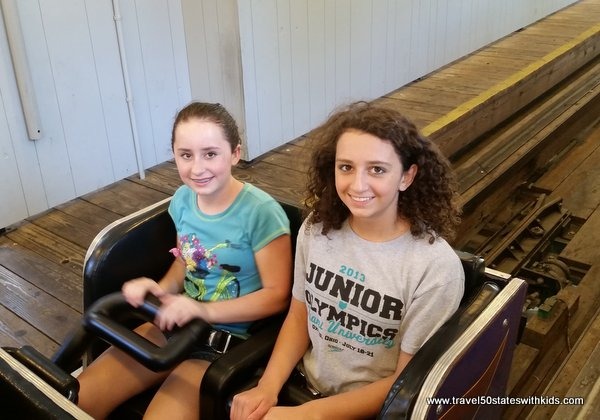 Then it was time for the HallowSwings. 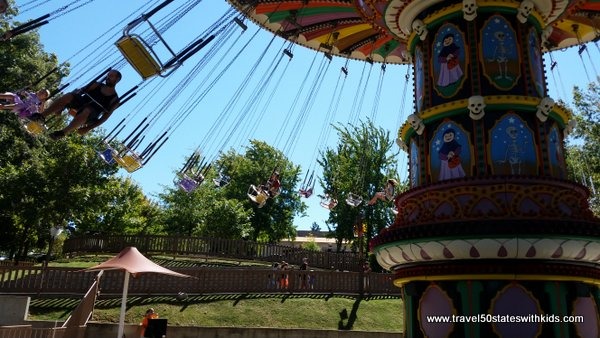 After that, we happened upon the Hoosier Celebration Theater right as the Graveyard Smash show was getting ready to start. The show featured popular songs with Halloween-themed lyrics. The costumes and makeup were impressive. 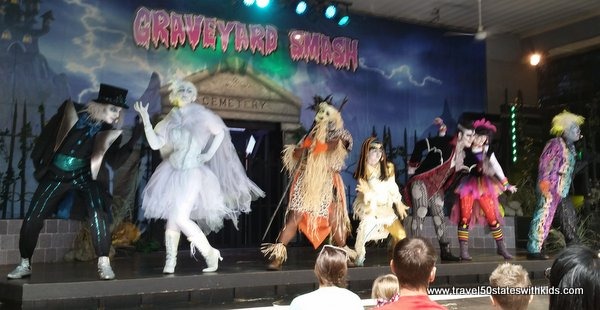 We walked past the Splashin’ Safari Plaza just as the Kitty Claws Dance Party was wrapping up. My kids are too old for this, but the little ones looked like they were really enjoying this. After the dance ended, Kitty Claws led the kids through the Trick-or-Treat Trail. 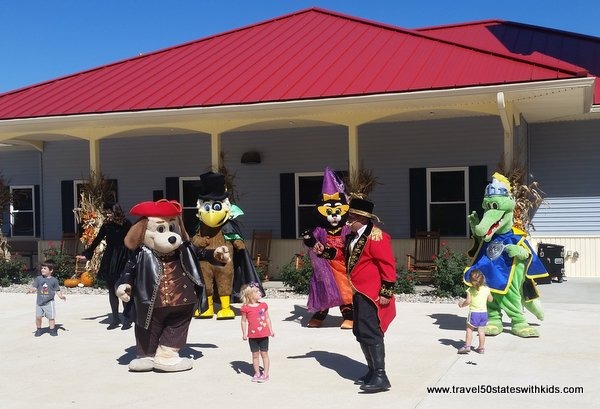 Then it was time for the big ride: The Voyage. We headed into the Thanksgiving section of the park where this giant roller coaster is located. The Voyage was named the best wooden roller coaster in the country by TIME Magazine. It holds the world’s record for most air time (feeling of weightlessness) on a wooden coaster. It also ranks in the top 10 wooden coasters in the categories of Tallest, Longest Drop, Fastest, and Longest. It was fun! Quite bumpy (like most wooden coasters are), but fun! Some of us in our family rode it twice. Some wouldn’t ride it at all. 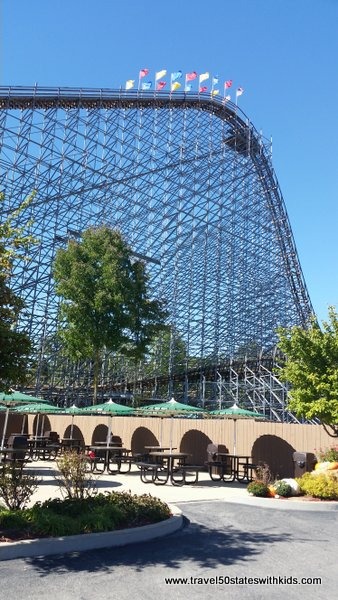 Our exchange student really looked forward to riding the Mayflower. 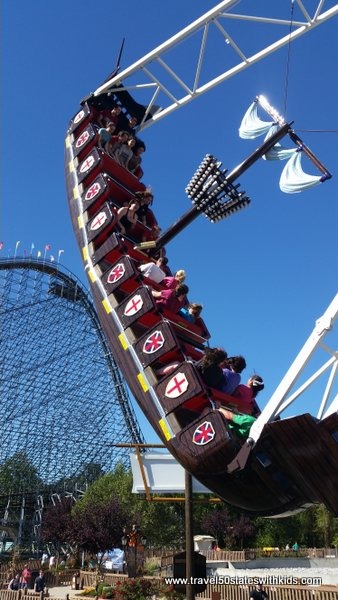 The Gobbler ride is one of those rides where you shoot at targets to earn points. Another cute family ride was the Turkey Twirl. 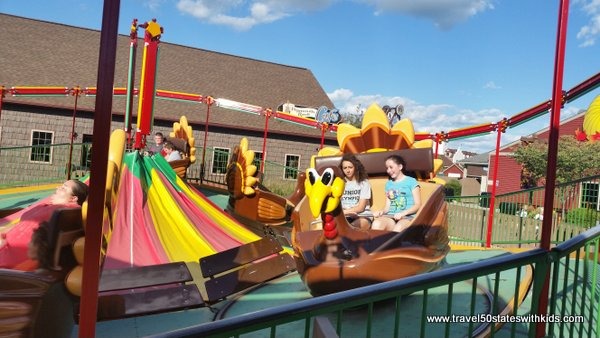 By then, we were all really hungry and the Thanksgiving section was a wonderful place to be when hungry. We went to the Plymouth Rock Cafe which had yummy offerings like turkey, pulled pork, and fried chicken, with sides including mashed potatoes, dressing, and green beans. You can order either an adult or child-sized portion. And although they aren’t in the following picture, I have to mention FREE DRINKS at Holiday World. You can get free soft drinks throughout the park whenever you want, with or without a meal. Very cool. 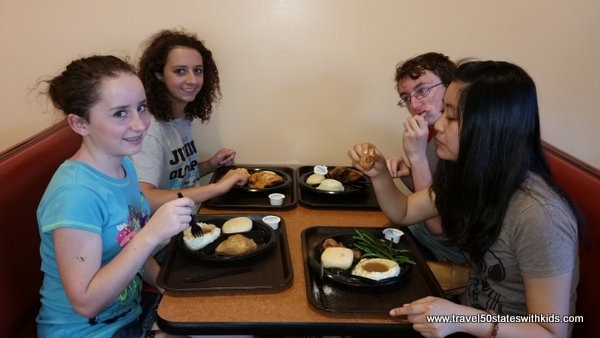 After stuffing our bellies, it was time to burn off some of those calories by finding our way out of a corn maze. We headed to an area filled with fall activities. We took a hayride out to the maze. 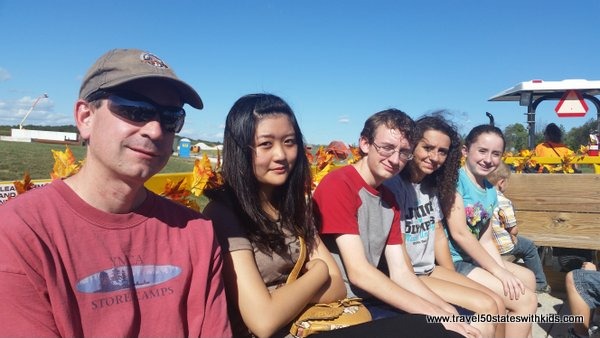 There are 12 acres of mazes, divided into a smaller and larger maze. We did the longer one. Note: don’t plan to do the corn maze too late in the day. You need to allow enough time to find your way out before the park closes. 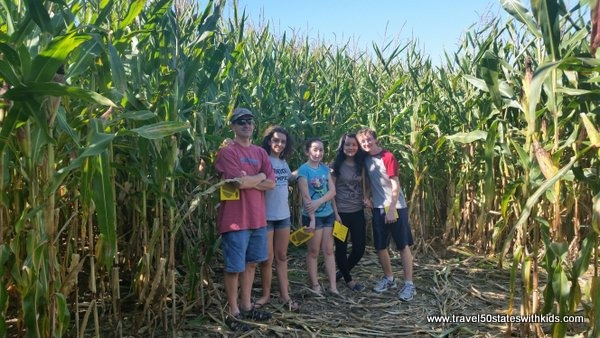 There were some really cute activities for little tots, including pumpkin decorating and a hay bale maze. We also saw a slide that deposits children into a pit of dried corn. 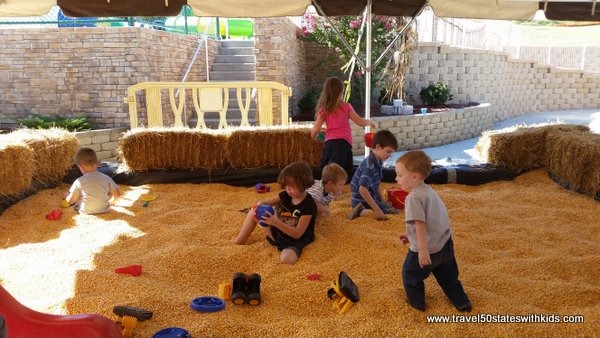 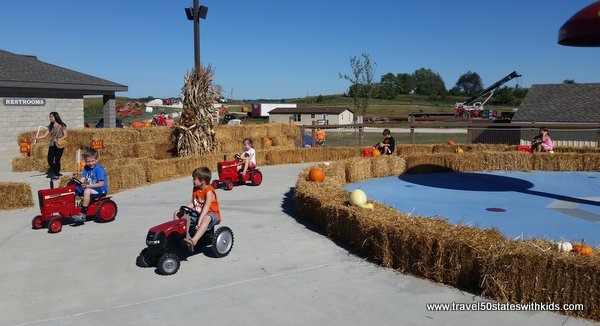 There is one show that we just couldn’t fit in: Chainsaw Willy. I would have loved to have watch him make these creations using only a chainsaw and block of wood. 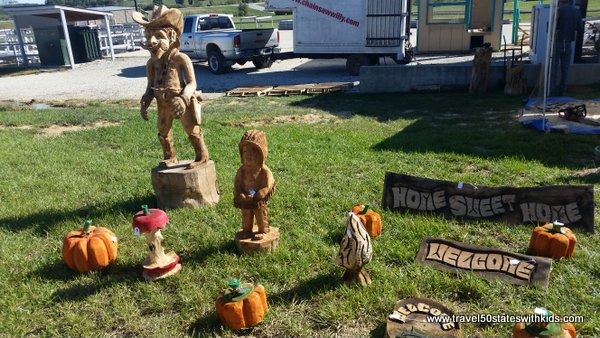 With less than an hour left until closing, we decided to head over to the Fourth of July section. The kids wanted to ride the Revolution (rethemed as the Resurrection for Halloween). In the background of this photo you can see the Liberty Launch and Sparkler/Spookler. 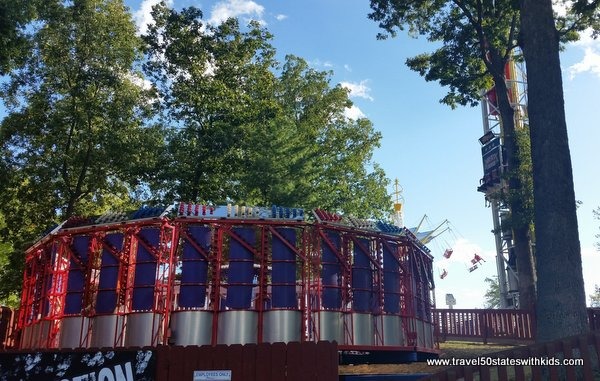 Speaking of retheming rides for Halloween, they renamed the Carousel the Scarousel. Cute, huh? I thought they did some clever combining of holidays in their decorations. Check out this flag made of pumpkins. 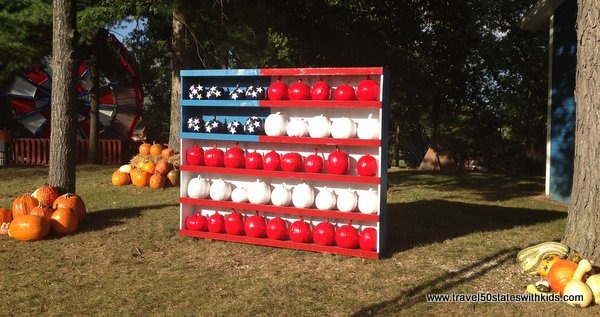 I made a quick tour through Holidog’s FunTown before the park closed to see some of the offerings for little ones. 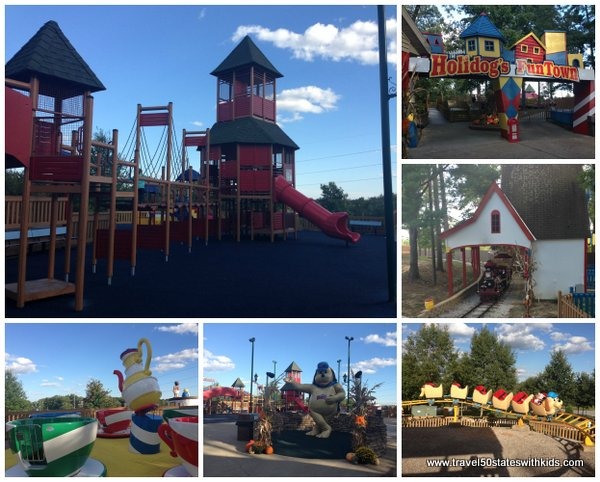 We didn’t have a chance to ride everything, but we rode our favorites at least twice. I think September was an ideal time to visit Holiday World. Happy Halloween Weekends continue through October 26, 2014, so there’s plenty of time to schedule a visit this year. Or, if you wanted to take advantage of the water park, you could wait until next summer. Or you could do both! I think my kids would like that. Another reason for visiting next summer is The Thunderbird, a new roller coaster. 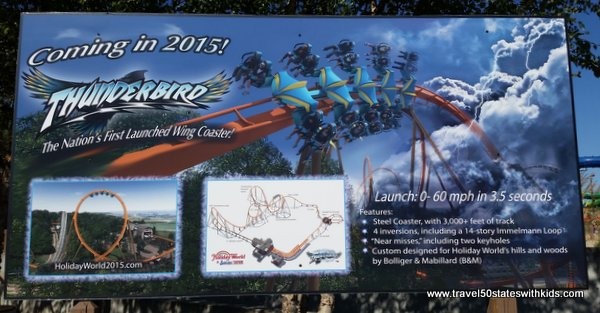