Perhaps you remember our visit to the charming town of North Pole, Alaska. I am fascinated by towns that get to celebrate Christmas all year long. We recently had a chance to visit another: Santa Claus, Indiana. One summer during my college years, I lived in Evansville, Indiana, and when I would drive home for a weekend, I’d always see the sign for Santa Claus. It took 25 years, but I finally got to visit this cute town that has streets named after reindeer, carols, and everything Christmas.

My kids wanted to know how a town came to be named Santa Claus, so I read up on the history. The town was originally called Santa Fee, but when they tried to obtain a post office, they found out that another town in Indiana had a similar name–Santa Fe–and they had to come up with a new name. Local legend says that the townspeople gathered one December night in a local church to choose a new name. When a gust of wind blew open the doors, sleigh bells were heard and a child exclaimed that it must be Santa Claus. The townspeople decided Santa Claus should be the new name and the U.S. Post Office officially accepted the name in 1856. The town still wholeheartedly embraces their name as can be sign by this Santa statue outside of Town Hall. 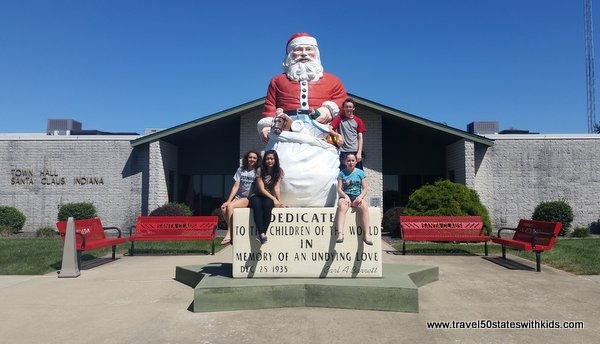 One of the main attractions in Santa Claus is Holiday World, a holiday-themed amusement and water park. We spent nearly an entire day there and I’ll be writing an entire post about that later this week.  Today I’m going to tell you about some of the shops that are worth a visit. The first is the Santa Claus Christmas Store. 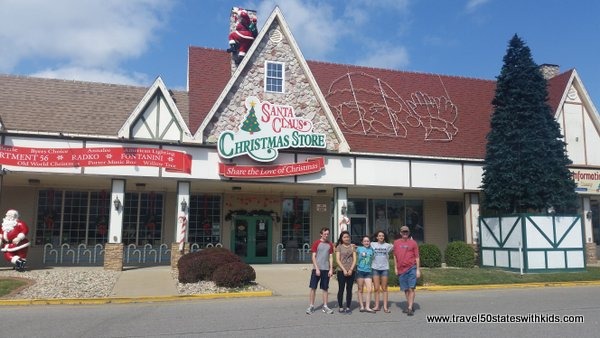 This store is open May through December and has a huge selection of Christmas ornaments and decorations. It’s a great place to find some really specific or unique ornaments. Need an ornament for a Snoopy lover? Got it. How about one for a Beatles fan? Check. They had collections of sports ornaments too. (OK, so I didn’t see any water polo ornaments, but I understand that’s not a very popular sport.) 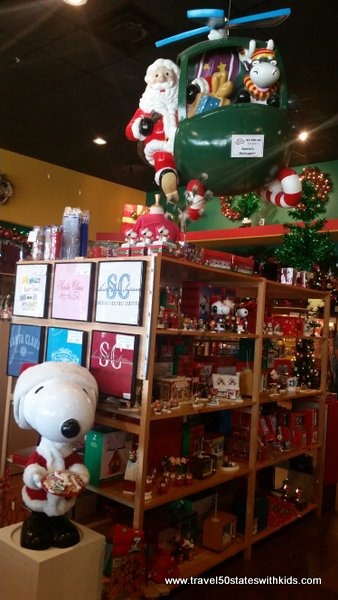 Another very cool thing about this store is that you can meet Santa in person! Our foreign exchange student, Ellen, got to meet Santa for the very first time! 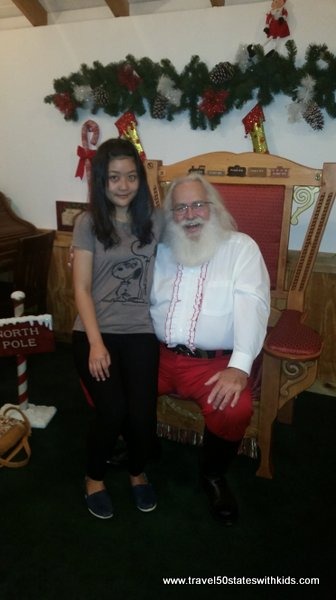 And Santa knows if you’ve been bad or good. He asked Ellen right away if she was a picky eater, and she admitted that she was. She told him that she likes rice and noodles and that if she ate too much American food, she’d get fat. Santa thought that was pretty funny. Then the rest of my kids joined in the conversation. Santa had a little talk with them about their bad habit of leaving dirty laundry lying on the floor. And he must have put some fear in them because when he told my 16-year-old son to sit on his lap, my son obeyed. 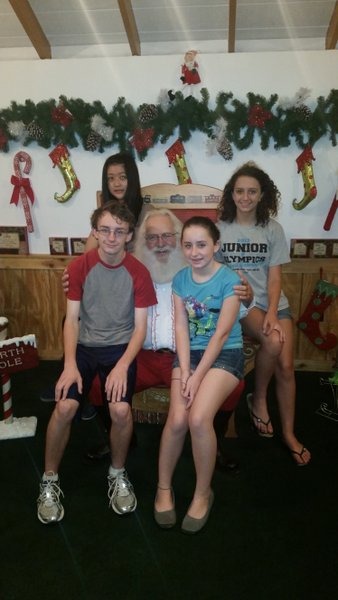 After their little chat was over, Santa told all of them to write their names on the Nice List. 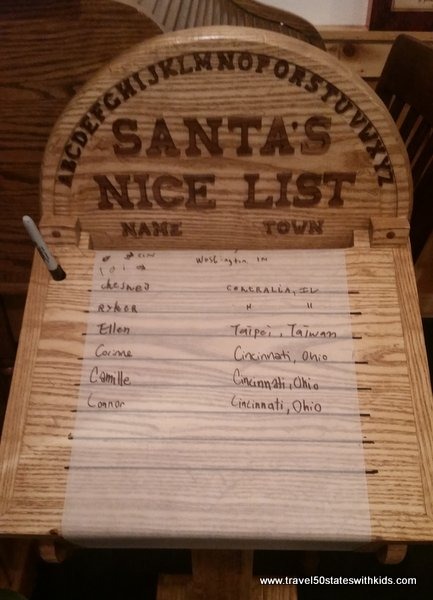 Another store we visited was Santa’s Candy Castle which has been around since 1935.

The store has an extensive collection of novelty candy like PEZ, Jelly Belly, and more. 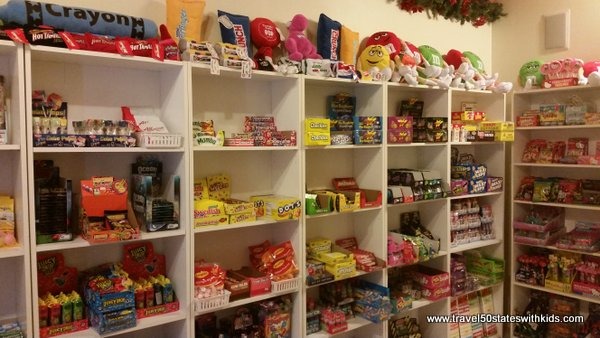 You’ll also find a very cool gumball machine that sends a gumball through a bunch of machine elements before delivering it to you. 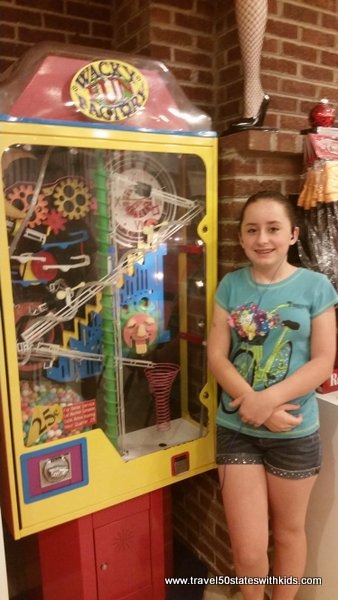 There are plenty of non-candy gift items as well, including Christmas books for children. 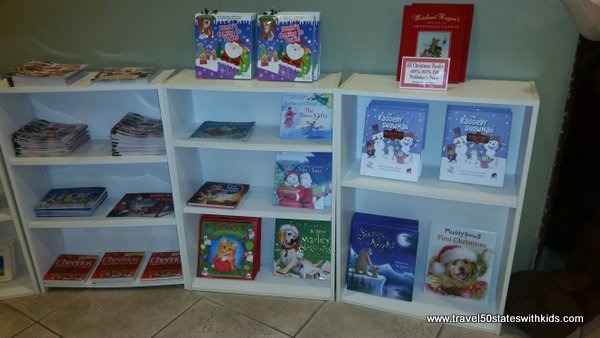 At the candy counter, you’ll find a selection of homemade candies and fudge. 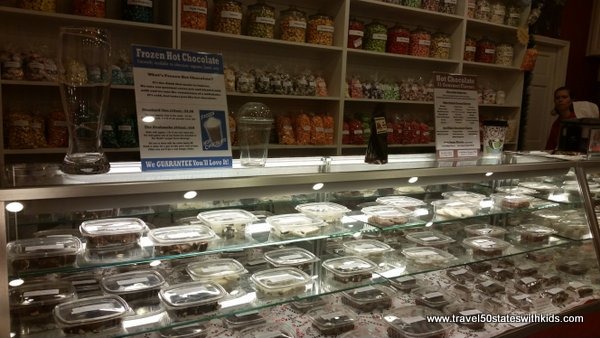 And at that counter, you can order some hot chocolate–either one of their 27 flavors of gourmet hot chocolate or their signature treat: Frozen Hot Chocolate. We opted for the $16, 64 oz. Avalanche, which they say is the world’s largest cocoa beverage. 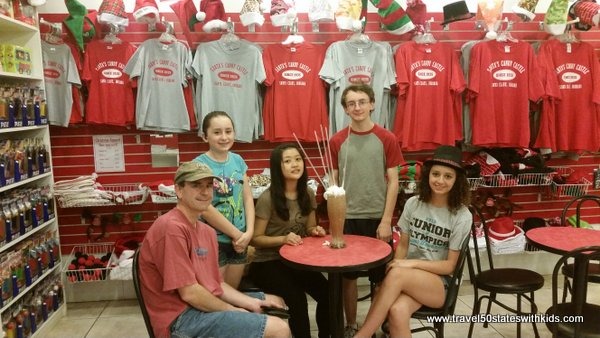 Yes, it’s gigantic and they have a wall of fame for people who can drink it all themselves. We ordered it with six straws and downed it rather quickly. 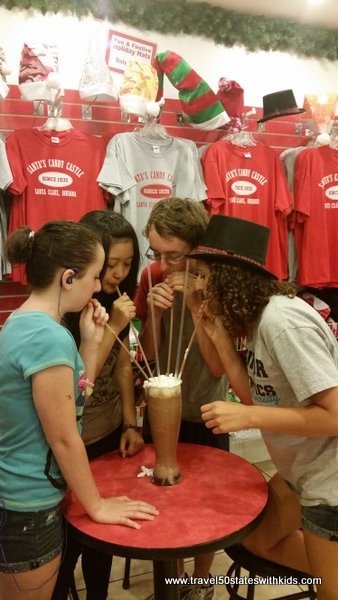 There are several attractions that we did not have time to visit, but I’ll mention them here so that you know what else is available: Christmas Lake Golf Course, Frosty’s Fun Center (miniature golf and arcade), Holiday Drive-In Theater, Santa Claus Museum, and Santa’s Stables (horseback riding). Nearby is Lincoln City where you can find Abraham Lincoln’s Boyhood Home, which I’ll be writing about later. Other Lincoln-themed attractions include Lincoln State Park, Lincoln Amphitheatre, and Lincoln Pioneer Village & Museum.

You’ll find several different lodging options in Santa Claus, many of them with Christmas themes. We stayed at Lake Rudolph Campground & RV Resort which I’ll be writing about later this week.

Check out the Spencer County Visitors Bureau website for more information about Santa Claus, Indiana, along with discounts and coupons.