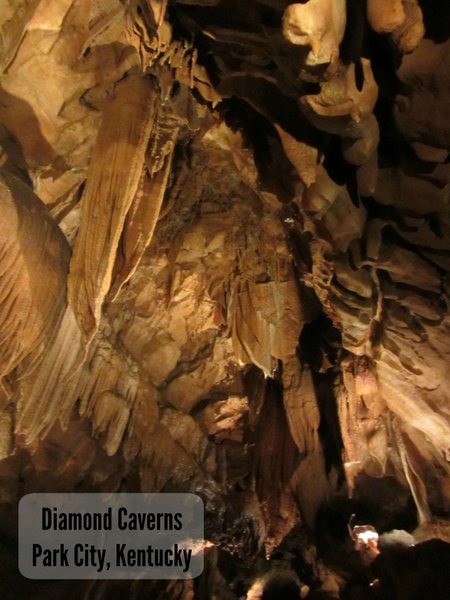 Diamond Caverns is located in Park City, Kentucky, in the heart of Kentucky’s Cave Country, not far from Mammoth Cave National Park. Because it is located so close to Mammoth Cave, it makes sense to compare the two caves. The names hint at the differences. What makes Mammoth Cave impressive is the sheer volume of the underground rooms. Diamond Caverns, on the other hand, glitters with beauty. 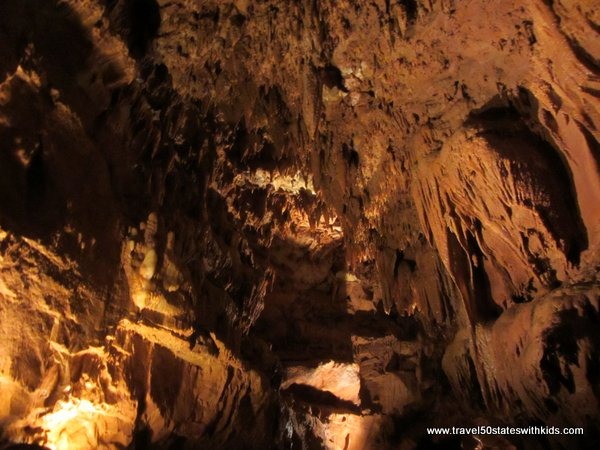 You won’t find any diamonds in it, but there are many beautiful discoveries to be found on the hour-long tour. Another difference between the two cave tours is the size of the group. You’ll find much larger group sizes on the Mammoth Cave tour. Diamond Caverns is privately owned and its tour had a more intimate feel with a smaller group. It was easier to ask questions of our tour guide. The tour went through a half-mile passage rated at moderate difficulty. One thing to note is that you are not permitted to bring any drinks with you, not even a bottle of water. We saw many different types of cave formations. 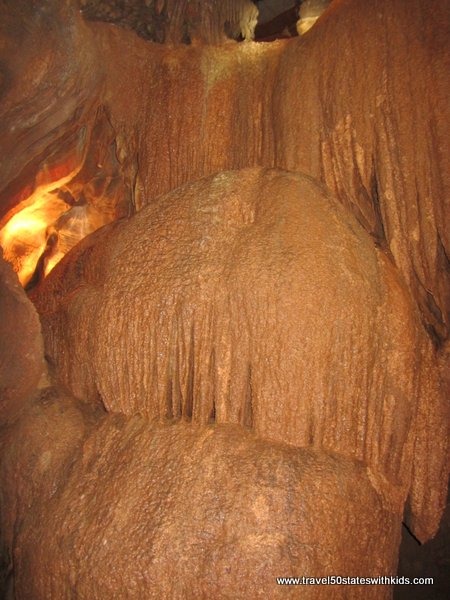 Diamond Caverns is a wet cave, which accounts for the stalactites, stalagmites, and other formations. The tour moved at a nice, slow pace so that there was plenty of time to see and photograph the cave features. 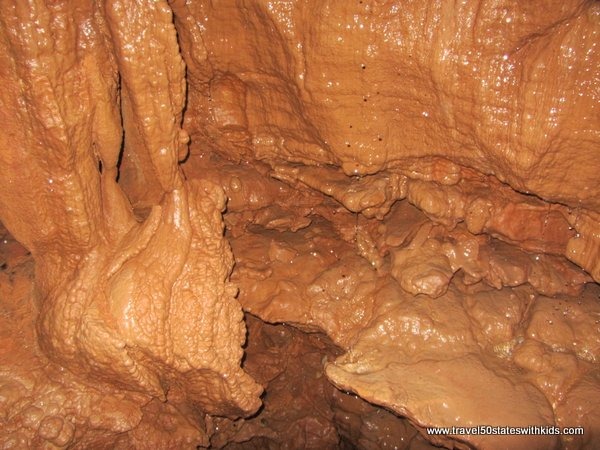 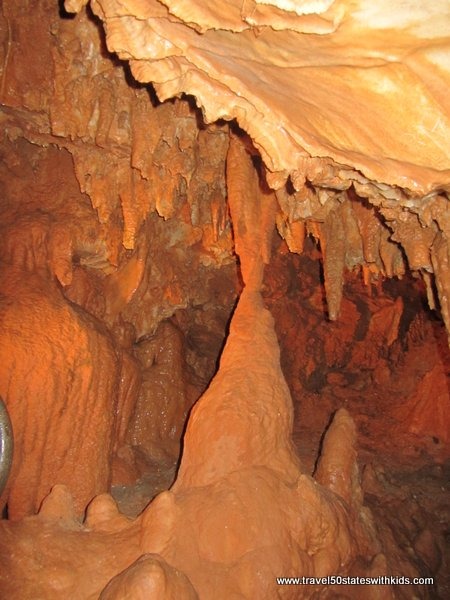 In the late 1800’s, one of the formations was cut in half. The calcite crystal deposits look like tree rings. 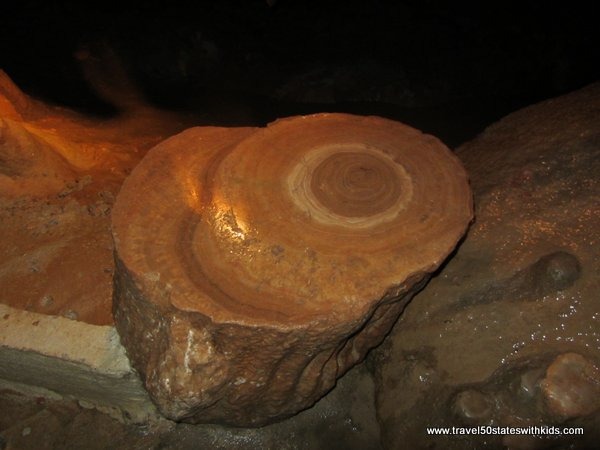 We were introduced to a type of cave formation that was new to us (at least the term was new). They call it “Cave Bacon.” Look at the middle of this picture. Do you see it? It really does resemble bacon! 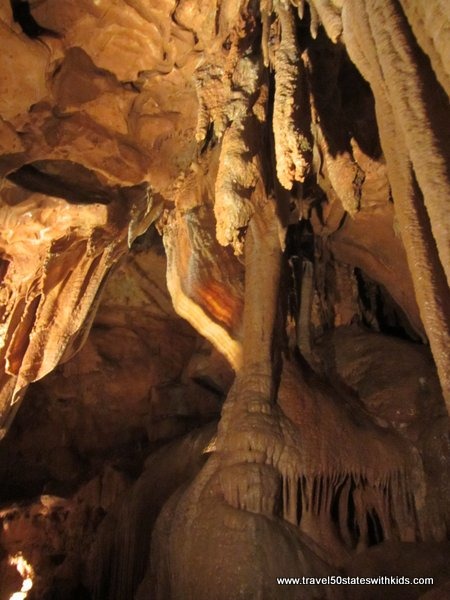 Another interesting feature of this cave was the “Beehive Ceiling.” 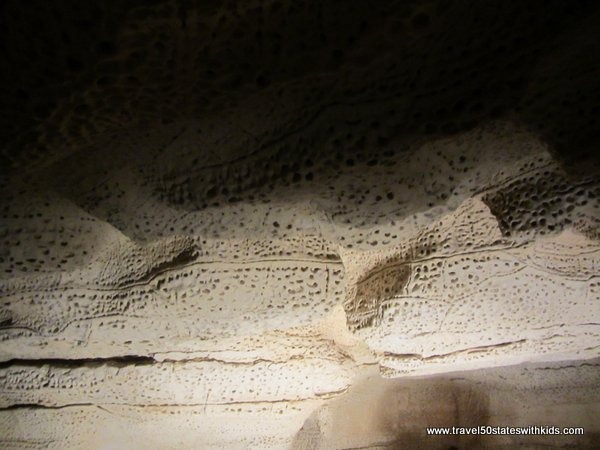 Our guide also pointed out a cave cricket. 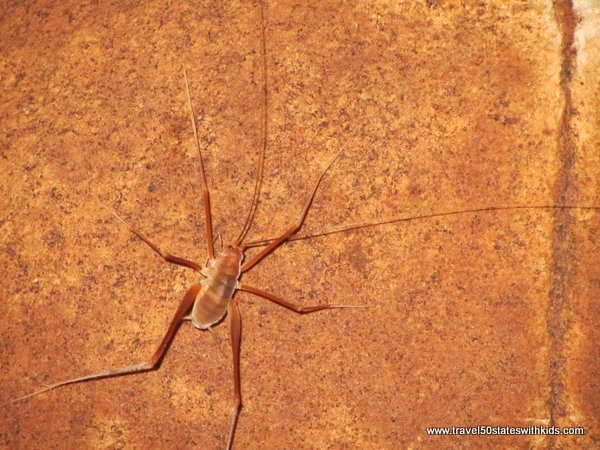 My kids thought that Diamond Caverns was prettier and more interesting than Mammoth Cave. That’s not to say that we wouldn’t recommend touring Mammoth Cave. They are very different and I think Mammoth and Diamond complement each other because they each offer something different. If you are in the Cave City area, I would highly recommend visiting both caves. 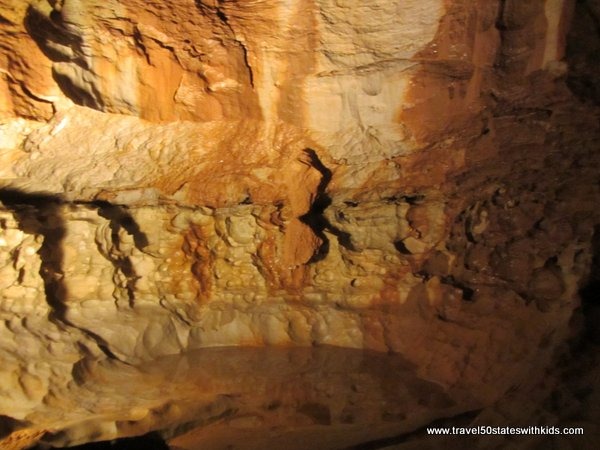 Disclosure: We received complimentary admission to Diamond Caverns so that I could research and write this article. Many thanks to the Bowling Green Area Convention & Visitors Bureau  and the Cave City Convention and Tourist Commission for coordinating our trip.