I had wanted to see the Mackinac Bridge for a long time and thanks to UPtravel.com, who hosted our lodging and attractions, my kids and I were finally able to see the bridge and the Upper Peninsula this summer. The Mackinac Bridge (pronounced Mackinaw) is an engineering marvel. At five miles long, it is the longest suspension bridge in the western hemisphere, and the fifth longest in the world. 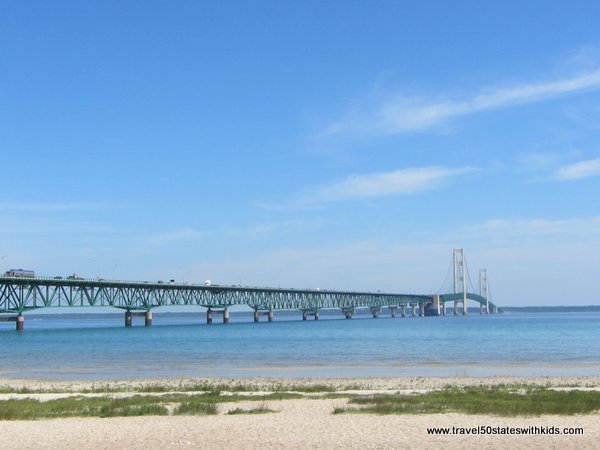 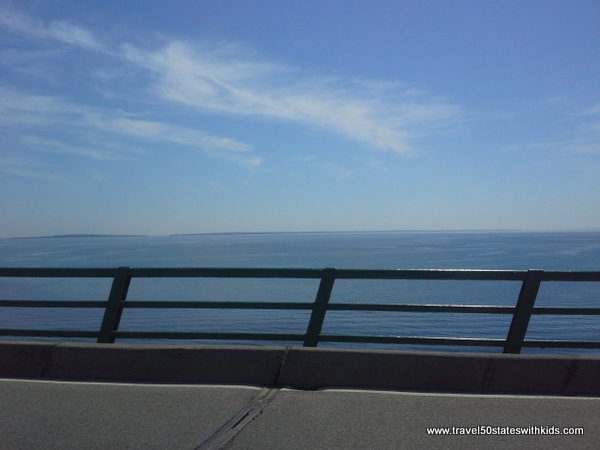 But before you cross the bridge, you’ll probably want to stop and admire the bridge from land. The place to stop on the south side is the Old Mackinac Point Lighthouse. In addition to the bridge, you can also see this stately brick lighthouse. 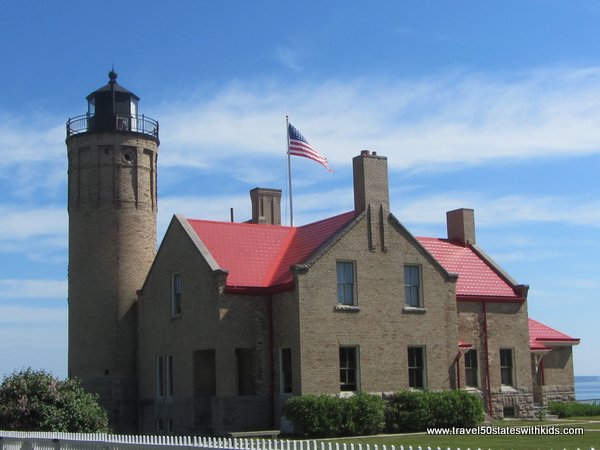 Tours of the lighthouse are available, and as much as I would have loved to have seen the view from the top of the tower, we were on a tight schedule and didn’t have enough time. Lighthouse tours cost $6.50 for adults and $4 for kids, but there is no charge to park and admire the view. Walk up to the beach to get a better view of the bridge.  That’s where I took the first picture and this next one (with the zoom lens). 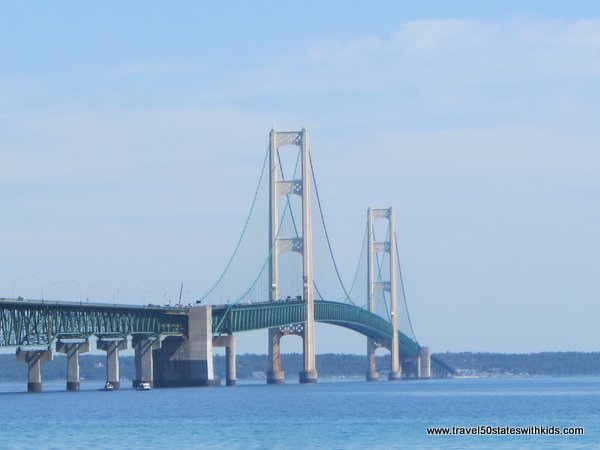 There are also picnic tables and restrooms on the lighthouse grounds. If you have even more time, nearby is Colonial Michilimackinac, a reconstructed 18th-century fort and fur-trading village. I’m a big fan of living history museums and it pained me that we didn’t have time to tour it. But we did make a quick stop for some of Mackinac’s famous fudge. Technically, it’s Mackinac Island, not Mackinaw City (on the mainland), that is famous for fudge, but there’s plenty of fudge to be found in Mackinaw City too. Each of us picked out a flavor of fudge, and we were on our way again.

The toll to cross the bridge is $4 per car. The speed limit is 45 mph, which is good because you don’t want to drive so fast that you miss the view. In my case, I was very glad that I had a teenager who could ride shotgun and take some pictures. 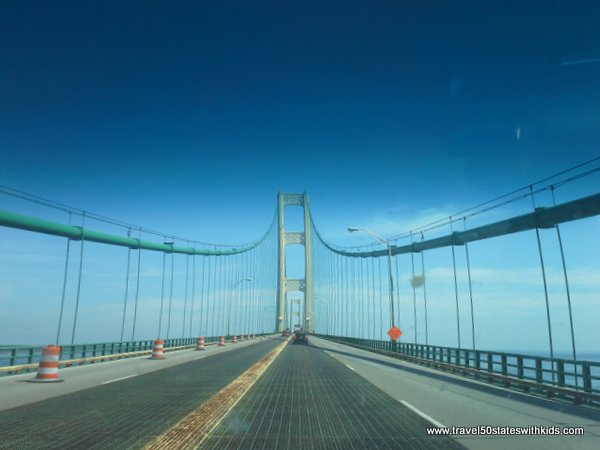 There is another viewing area on the north side of the bridge in St. Ignace. 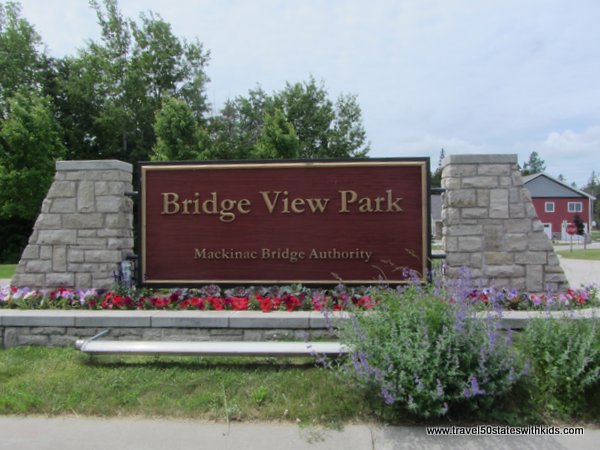 I couldn’t find an official website for this park. It is located on Boulevard Drive off U.S. 2, just west of the bridge. 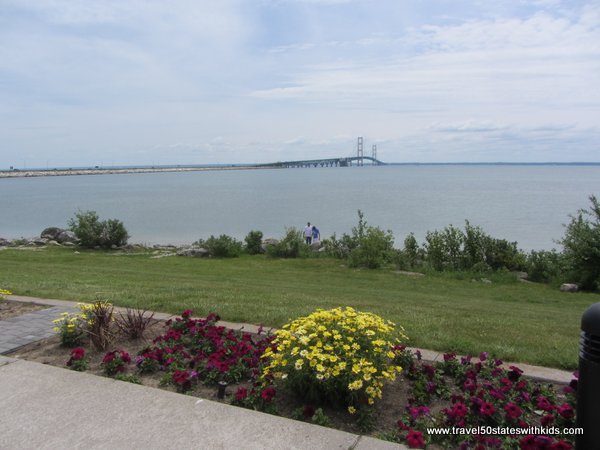 After we crossed the bridge we were officially in Yooperland. Yooper is a a nickname for people born and raised in the U.P., which stands for Upper Peninsula. 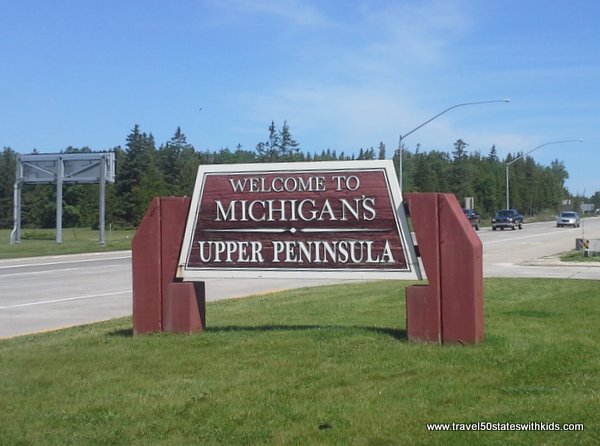 We spent three days seeing as much of Michigan’s Upper Peninsula as we could. The next several posts will cover some of the sights that we saw. But before we move on to that, let’s talk about food. The traditional Yooper food that you don’t want to miss is a pasty. So that you don’t mispronounce it, I must tell you that it rhymes with “nasty” not “tasty”. And that’s unfortunate, because pasties are not nasty. It’s a terrible thing that I couldn’t find another word that rhymed with pasty. A pasty consists of pie crust filled with vegetables, ground meat, and seasonings, served with a side of gravy or ketchup. If you go to the U.P., you must try one. My kids weren’t crazy about them, but I thought they were good. I tried them at two different places and thought one was definitely better than the other. Some places make vegetarian versions too. 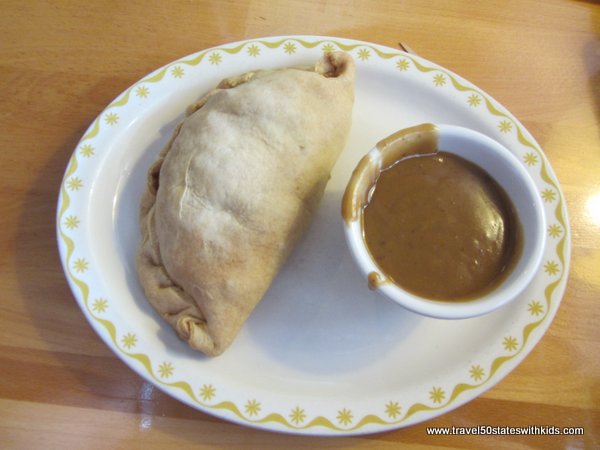 Another food worth trying in the U.P. is whitefish. It is a mild fish that is perfect battered and fried, or served as a fish sandwich.

Check back soon to read all about our adventures in the Upper Peninsula. Or better yet, subscribe via email and my posts will come to you. Plus, you’ll receive a free copy of my ebook, How to Visit All 50 States in 12 Trips.