On our second day in Michigan’s Upper Peninsula we started our morning at Oswald’s Bear Ranch. To be quite candid about it, this was the big reason we went to the U.P. Here’s how it happened: I came home from the Midwest Travel Writers Association conference with lots of brochures and told my kids to look them over to see what places interested them. My older daughter, who was 12 at the time, took one look at a picture of a girl with a bear and wrote “We must do this” in the brochure. I believe in following kids’ interests in our travels, so I made a call to the Upper Peninsula Travel & Recreation Association and we made the trip happen. 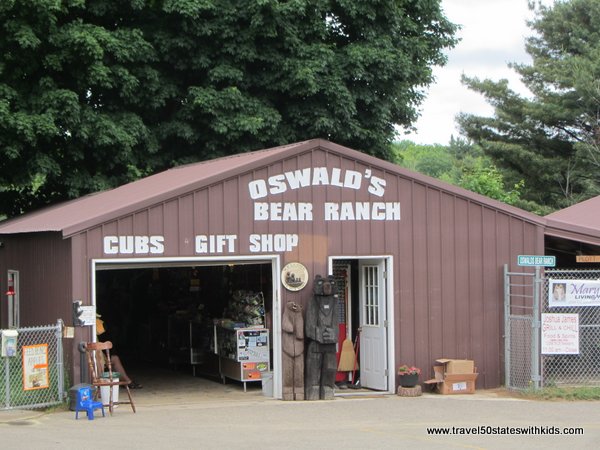 Oswald’s is great for large families because they charge by the vehicle, not by person. Admission is just $20 per car. Shortly after we arrived, my kids pointed out a bear in a tree. 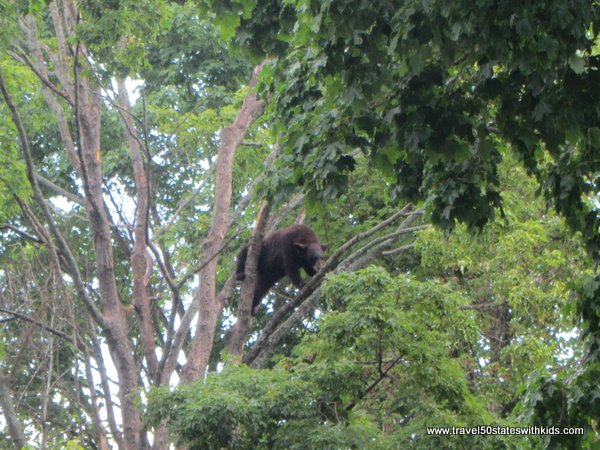 This certainly got my attention. I’d read that bears were good tree climbers, but I’d never seen one climbing before. We were fascinated and watched him for quite a while. He was quite the nimble climber. 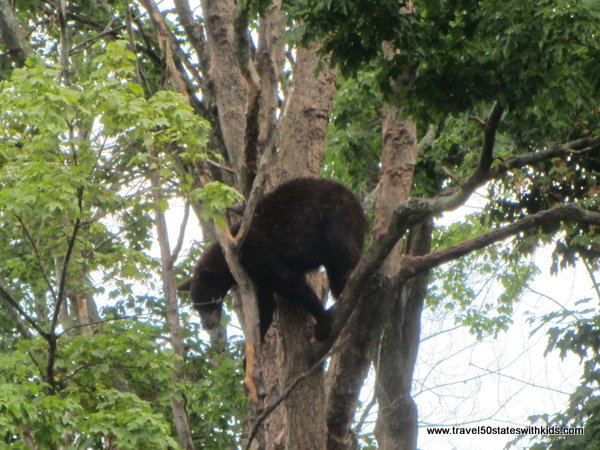 When we came back later, we found him napping. That doesn’t look like a comfortable place to sleep, in my opinion, but this bear was zonked. 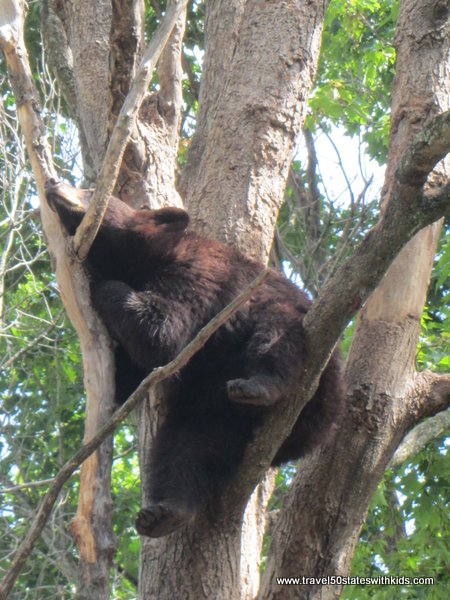 Oswald’s Bear Ranch is a rescue facility with four bear habitats. All four habitats are enclosed by double chain link fences. Raised viewing platforms give you an unobstructed view of the bears. You are free to wander around and watch the bears, but even more fun than that is feeding the bears. The on-site snack bar sells not only snacks for humans, but for bears too. Purchase a bag of apple wedges for $3 and toss them over the fence to the bears. One of the enclosures contains the younger bears. We were told that it has a pond that you can toss the apples into and the bears will enter the water to get them. The only problem was that all the bears were on the opposite end of the habitat and nowhere near the water. So we decided to try to lure them to the water. We discovered that my son has a knack for aiming apples. He tossed a few to get the bears’ attention and then started tossing them about every 20 feet, enticing the bears to head towards the water. His effort was quite successful and he led the bears to the water. We then climbed an observation platform for a better view and continued to toss apples into the water. 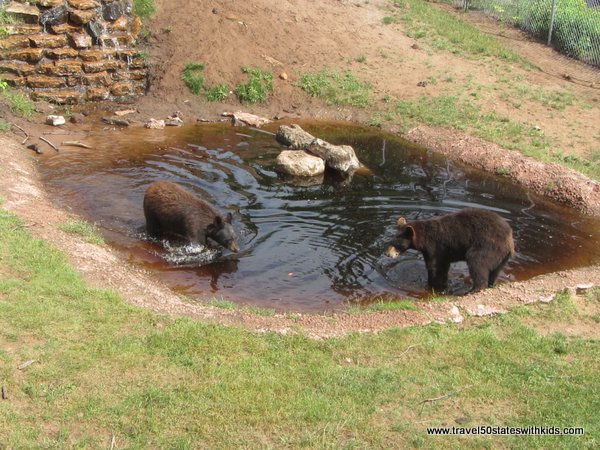 We discovered the bears would climb the rocks to get the apples. Great fun! 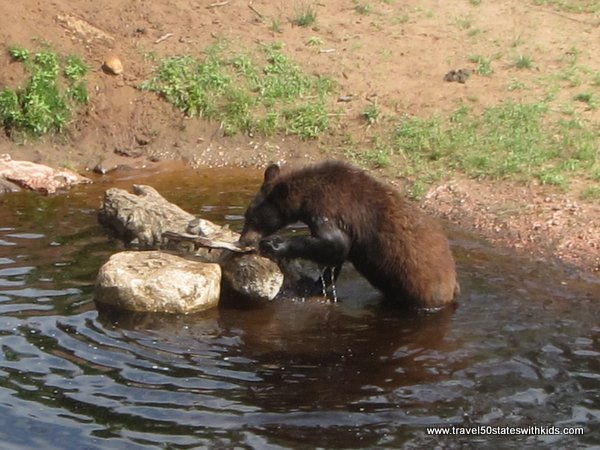 Other enclosures contained the older bears. Males and females are separated. No bear breeding is permitted in Michigan. The bears could smell which visitors were carrying apples and some of them followed us around as we circled the enclosures. This particular bear started a debate between my children. My daughters thought it was cute. My son said bears are interesting, but not cute. My opinion? I’ll say they are cute as long as they are behind a fence. (That doesn’t apply to to the cubs. They are cute without a fence. Keep reading to find out how you can pet a bear cub.) 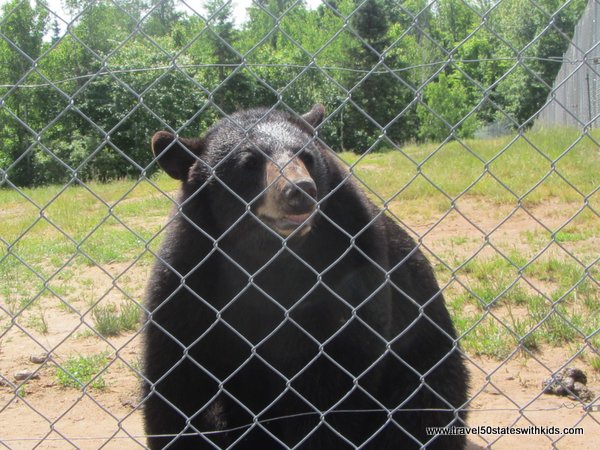 Other bears were quite lazy and would eat the apples only if they landed within crawling distance, so they didn’t have to get up. That reminds me of some advice I need to share: plan to buy several bags of apples. We noticed several families who just observed the bears and didn’t feed them. I am confident in saying that we got much more out of the experience by feeding the bears. I purchased bag after bag of apples because we enjoyed it so much. There are times to scrimp and times to splurge. This is one of those times to splurge. And, really, at $3 a bag, it’s not much of a splurge. If you budget for it in advance, then you can let your kids toss as many apples as they desire.

My daughter really does have a way with animals. She wasn’t content to just toss the apples to the bears; she made them work for it. She made this bear sit and stand for his apples. 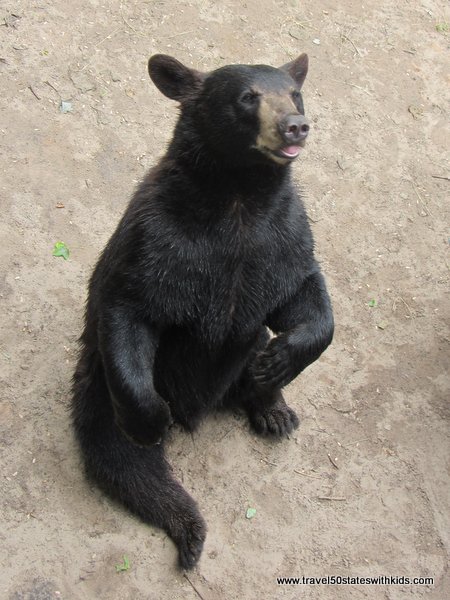 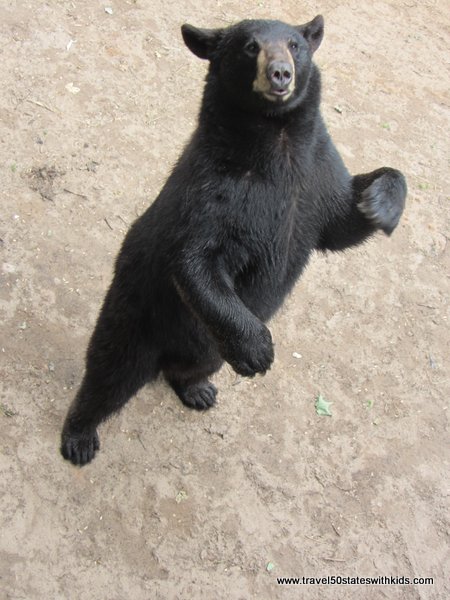 One of the enclosures contained the big guys. 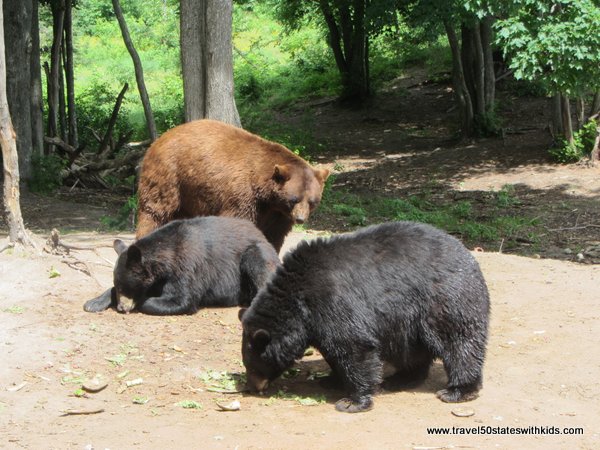 All of the bears at Oswald’s are Black Bears. But that’s the type of bear, not the color. As strange as it sounds, some Black Bears are brown. You can tell it’s not a grizzly because it doesn’t have the humped shoulders. 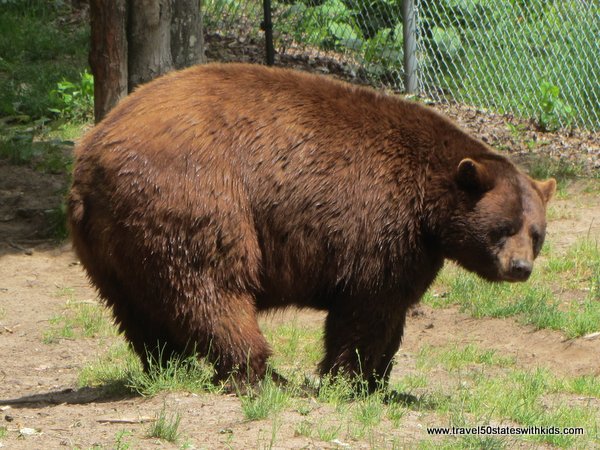 And other black bears are really black. 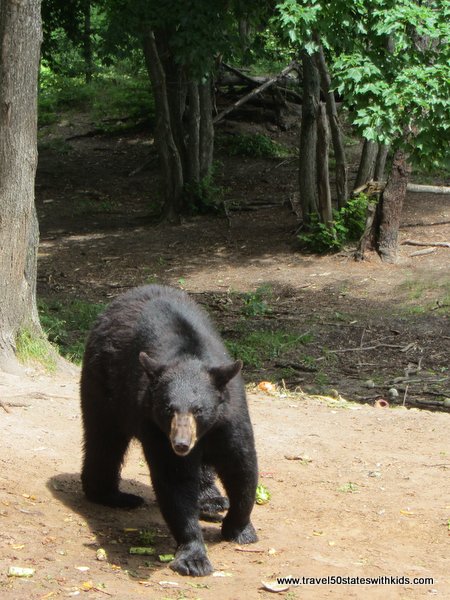 During our visit, I had the opportunity to interview Dean Oswald, owner of the ranch. The first thing I wanted to know was how the ranch got started. “In 1984,” Dean recalled, “I had the bears here just as pets. They’re kind of like children. You get one, then you’ve got two, three, four, and five. Ten years later, I had people stopping in here to see my bears from all over the country, and I thought I should have a gate up and let them pay for the food. So what happened is, instead of five to ten cars a day, it turned into a hundred-some cars a day. It turned into a business.” Dean opened his doors as a business in 1997 and continued to expand. Oswald’s Bear Ranch is now home to over twenty bears and continues to take in rescued bears from all over the country.

It’s easy to see Dean’s passion for bears. Many of the bears are rescued when they are are just 6-8 weeks old and weigh a mere 3-5 pounds. Dean keeps them in the house for two months, bottle feeding them every three to four hours. You can watch videos of the cubs on his website. They are adorable and whine just like human babies when they are frustrated. New federal regulations came out in 2012 prohibiting visitors from holding the bear cubs, but you can pet them and feed them with a spoon. This experience costs $10 per group. The price includes photos taken by an Oswald’s staff member with your camera. 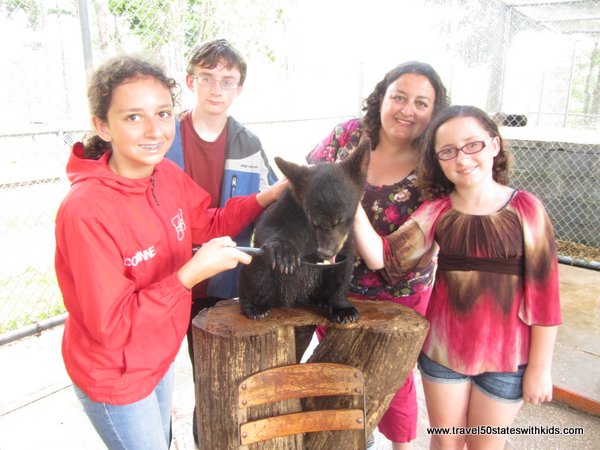 One of the members of your group holds a plastic serving spoon filled with Froot Loops cereal. We let Corinne do the honors since this her idea in the first place. Our bear was named Kendra. As soon as Kendra finished gobbling up the Froot Loops, our time was up. The whole experience lasts about a minute. I tell you that so that you can prepare your kids. If they are expecting a long interaction, they’ll be disappointed. It’s more of a photo session than an interaction. But is it worth $10? Absolutely! Everyone in the group is able to pet the bear cub.

The other bear cubs were in another cage. We learned that all black bears are born in January, so these bears were about six months old. I was surprised at how agile and athletic the bear cubs were. They ran across their cage and jumped as high as they could. They were quite curious. 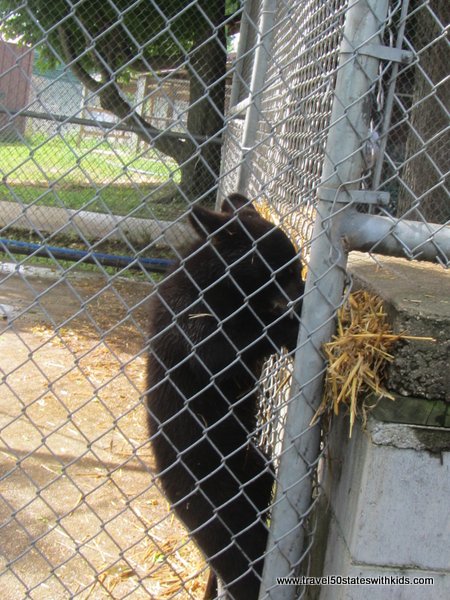 You could probably be in and out of Oswald’s Bear Ranch in less than an hour if you wanted to, but we spent a couple leisurely hours enjoying our time with the bears. We arrived soon after they opened in the morning, but by the time we left, it was getting pretty busy, so I’d recommend an early arrival.

Disclosure: My trip was hosted by UPTravel.com. UPTravel.com requested that Oswald’s provide free admission for me and my kids, but initially they declined.  However, after I interviewed Dean Oswald, he instructed someone to return my admission fee. We ended up spending all of that and more on apples and our photo session with the bear cubs.