Pictured Rocks National Lakeshore is a gorgeous 42-mile stretch along Lake Superior with cliffs, beaches, sand dunes, waterfalls, and lighthouses.  What’s not to like about that?! 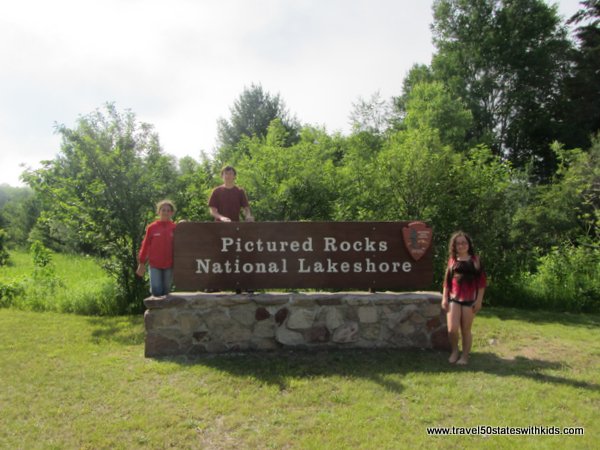 A scenic drive, H-58, traverses the lakeshore from Munising, on the western side, to Grand Marais, on the eastern side. There are Visitor Centers on both sides, so it doesn’t really matter which side you start from. Be sure to pick up a map that shows you the points of interest and if your kids are into Junior Ranger programs, pick up the booklet at the Visitor Center too. We started in Grand Marais. We had just left Seney National Wildlife Refuge in the pouring rain and hoped the storm would clear by the time we reached the lakeshore. The good news was that the rain had stopped. The bad news was that now fog was rolling in. There was a lovely wide stretch of beach in Grand Marais. 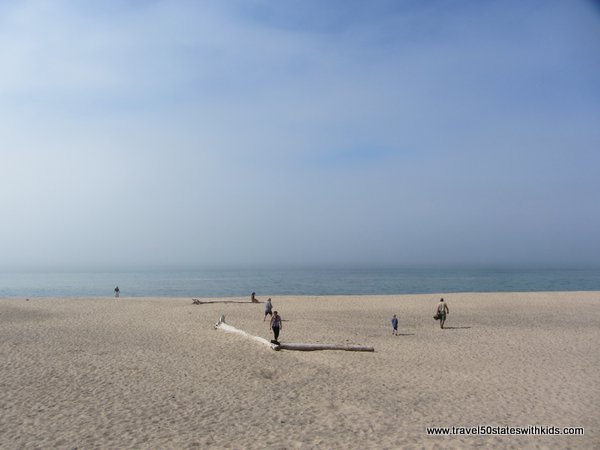 We walked out to the water. 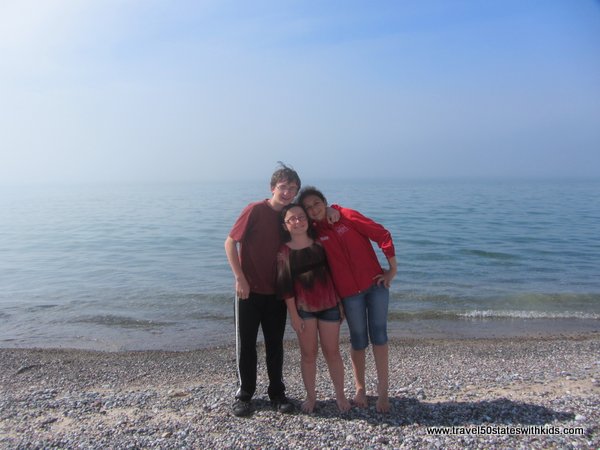 Camille was brave enough to get her feet wet.  Lake Superior is COLD. 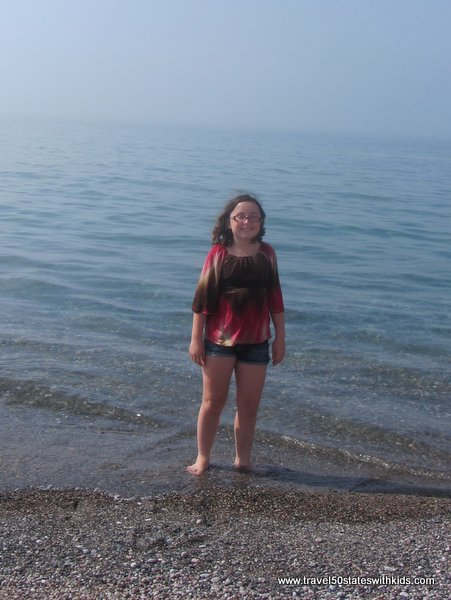 Looking westward, toward the Grand Sable Banks, you can really see the fog. 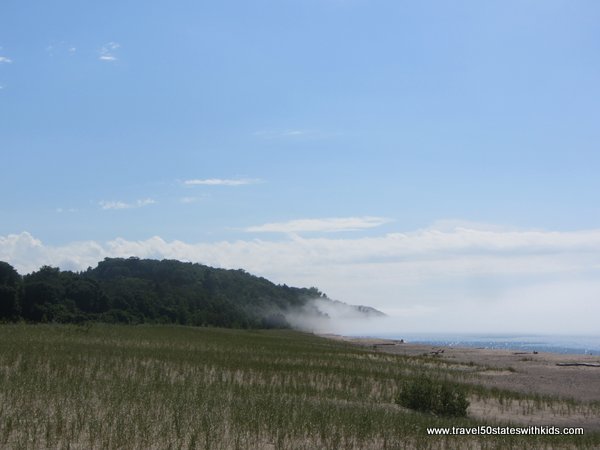 Our next stop on the route was Sable Falls.  From the parking lot, it’s a half-mile hike to the falls, with a bunch of stairs. 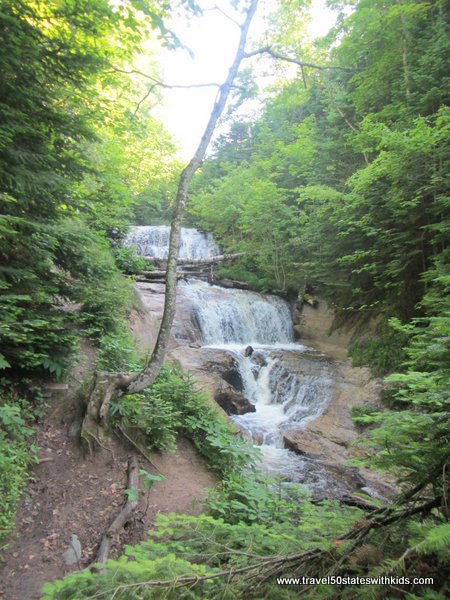 Our next stop was the Log Slide Overlook, which was once the site a log chute used by lumberjacks. It is long gone, but the name remains. A 1000-ft. trail from the parking lot takes you to the viewing platform, which the brochure says is a good place to see a lighthouse and the sand dunes. However, the day we visited the view was nothing but fog! We couldn’t even see the lake below us. 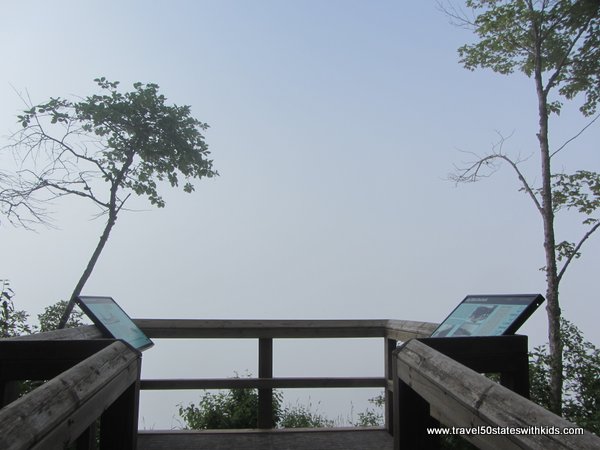 So, with scenic views now off the table, we had to find an alternate activity. Fortunately, climbing sand dunes is high on my kids’ list of favorite things to do. A sign warns that climbing this dune is not for out-of-shape people like me. The climb back up the Log Slide can take over an hour. 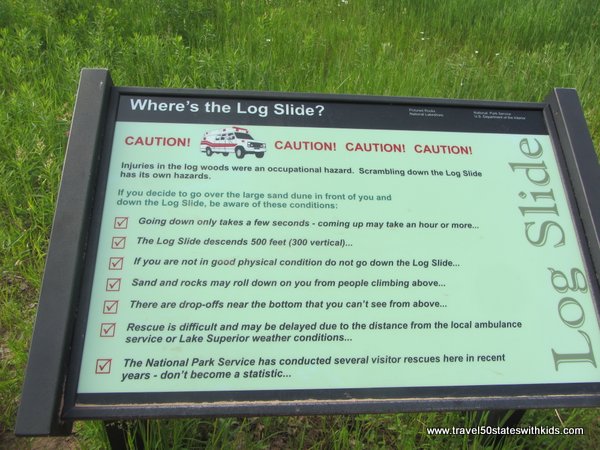 It isn’t too bad of a hike from the parking lot to the top of the dune. 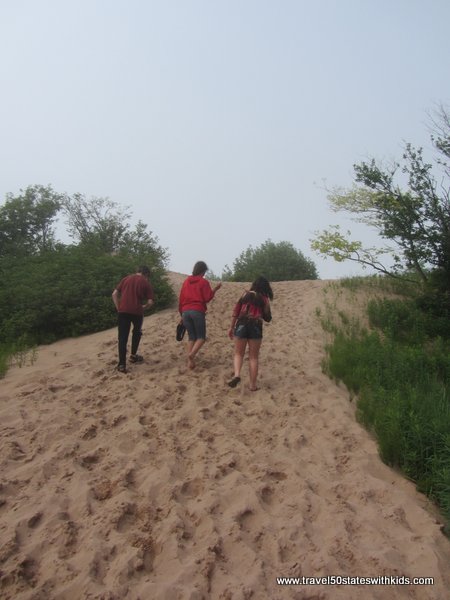 I decided to stay at the top of the dune while the kids went down to the water and back up. Yes, believe it or not, Lake Superior is down there somewhere. 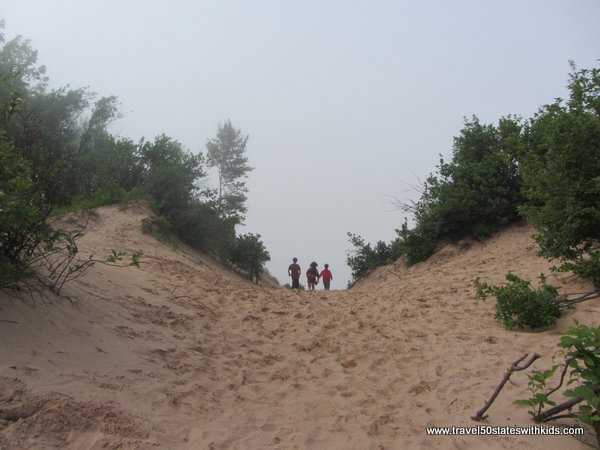 The fog combined with the angle of the dune made it very eerie. It looked like the kids were about to fall off a cliff into a cloud. 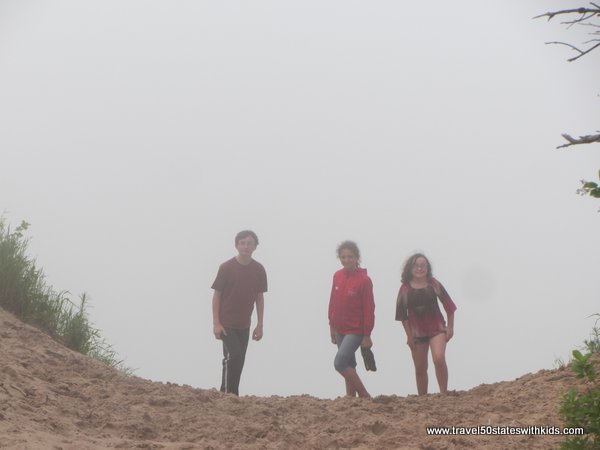 Once they got beyond this point, I lost sight of them for a while. I had to climb down a little further to see them. 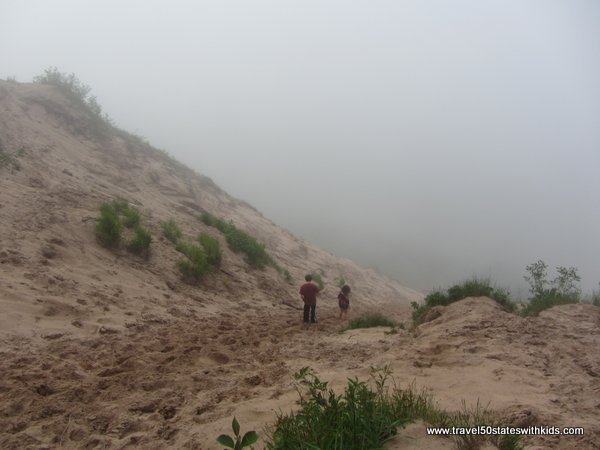 And they kept going until the fog consumed them. 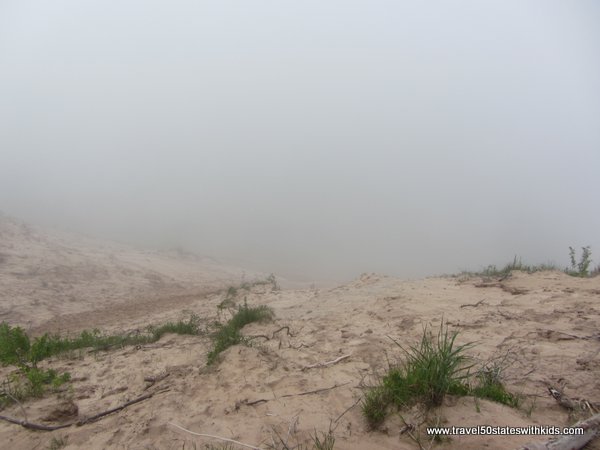 I’m not sure if I should be commended for my courage or chided for negligence in allowing my kids to do this. Fortunately, we remained in voice contact nearly the entire time. Wait, I think I see them. 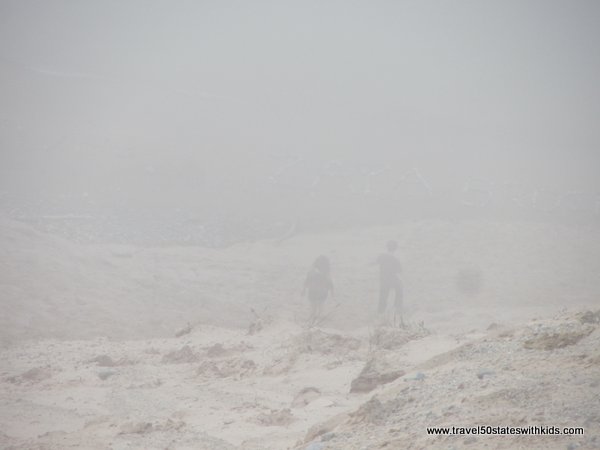 The kids made it back up the dune in far less than an hour because they are in great shape. And then, because they were having so much fun and I didn’t expect much from the other scenic views, I let them go down and back up a couple more times. They discovered it was much more fun to jump down the dune than walk. Eventually, the fog began to clear and we decided to continue our journey to the scenic cliffs for which Pictured Rocks National Lakeshore was named. But that was still quite a few miles away. First we had to drive past a 12-mile stretch of beach named Twelvemile Beach. 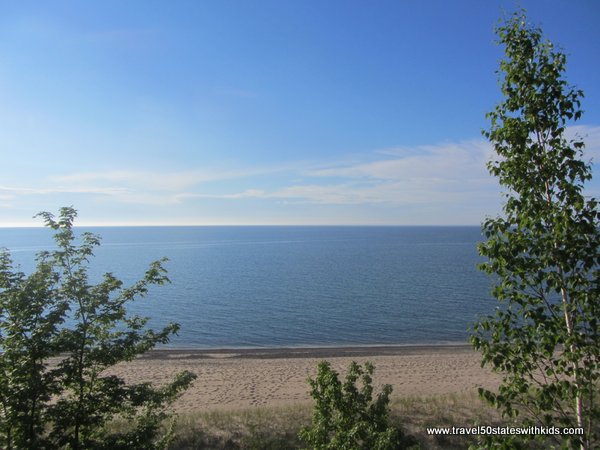 There were several other points of interest along the way, but because we had lost so much time waiting for the fog to lift, it was getting late in the day, so we proceeded directly to the Miners Castle overlook. 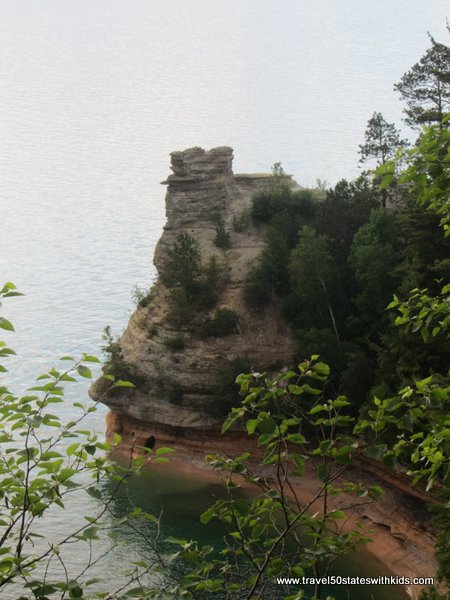 We hiked the short trail to get to the castle. From there we could get a different perspective of the sandstone cliffs. 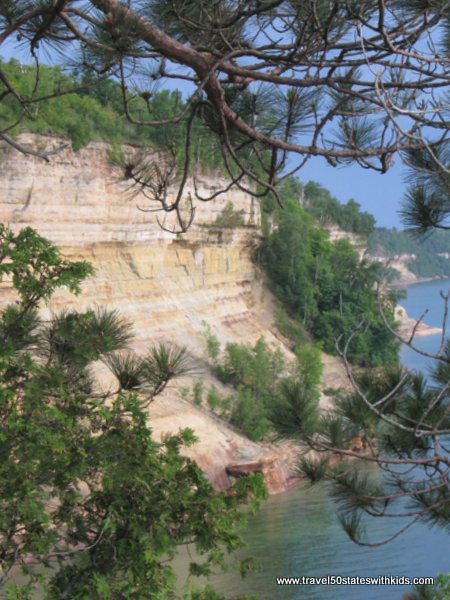 We also got to see an up-close view of Miners Castle. 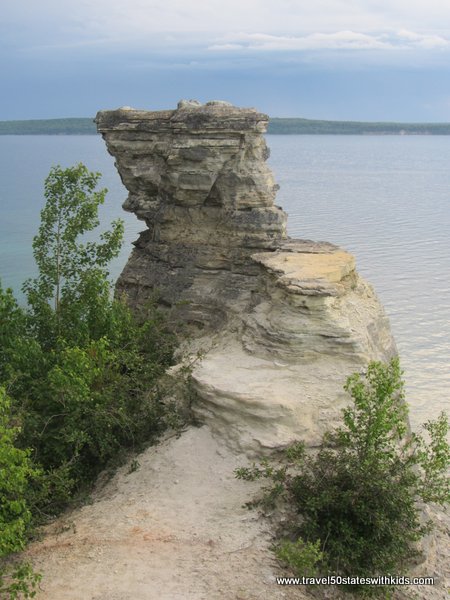 By this time, the Visitors Centers on the western side of the park had closed and we didn’t have enough time visit any of the other waterfalls or points of interest, but, considering the fog a few hours earlier, we were thrilled to end our day with this view. 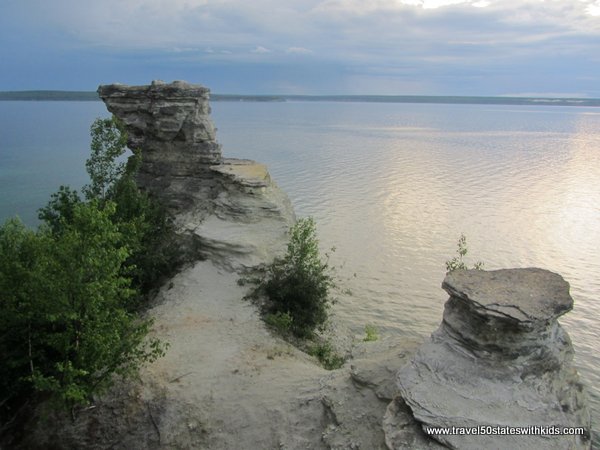 Open year round, 9 a.m. to 4:30 p.m.
Closed Sundays and holidays from October until Memorial Day weekend.
Open daily during the summer months with extended hours.

Open daily from the Friday before Memorial Day through Labor Day, 9 a.m. to 5 p.m.
May be open on weekends in May, September, and October.

Disclosure: My trip to Michigan’s Upper Peninsula was hosted by the Upper Peninsula Travel and Recreation Association.  There was no entrance fee to Pictured Rocks National Lakeshore.  My lodging was provided; I paid for our own transportation and meals.