The St. Mary’s River connects Lake Superior with Lake Huron and is a major shipping route. But before 1855, there was a problem: a 21-foot drop between the two lakes prevented ships from traveling between the lakes. In 1855, construction of the first lock was completed, allowing ships to pass through. Since then, several more locks have been built and now more than 10,000 ships per year pass through them. The locks were built between the cities of Sault Ste. Marie, Michigan, and Sault Ste. Marie, Ontario, Canada. Most of the locks are on the U.S. side, although there is one lock on the Canadian side. Soo Locks Boat Tours take you through both sides and give you an up-close look at how the locks work. The wonderful people at UPTravel.com hosted my trip and arranged for complimentary passes for me and my kids so that I could write about it. 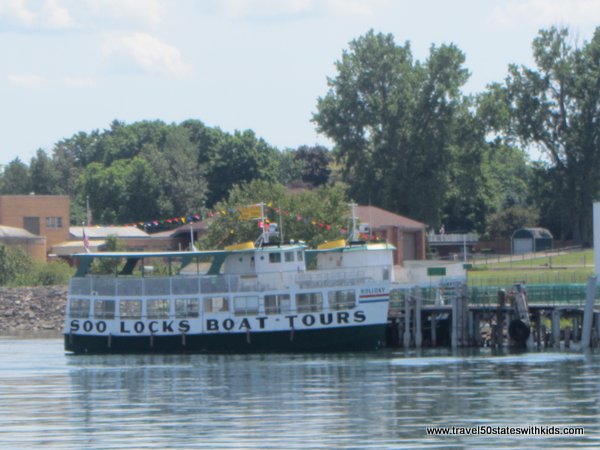 The boat tour starts downstream of the Soo Locks. Narration is provided, pointing out some of the sights and landmarks along the river. Then we approached the American Soo Locks. 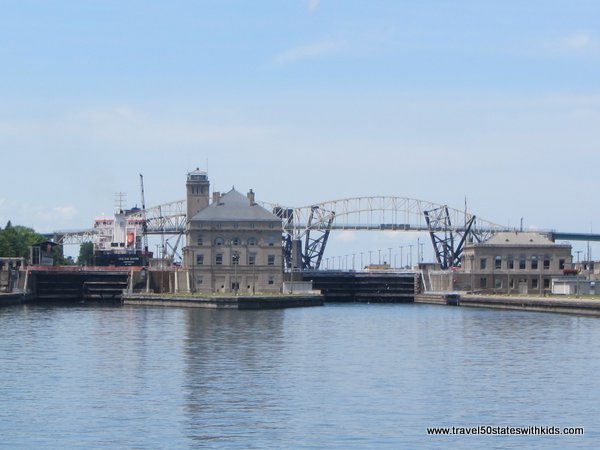 The boat pulled up close to one of the locks so that we could see the water escaping as the water level inside the lock went down. 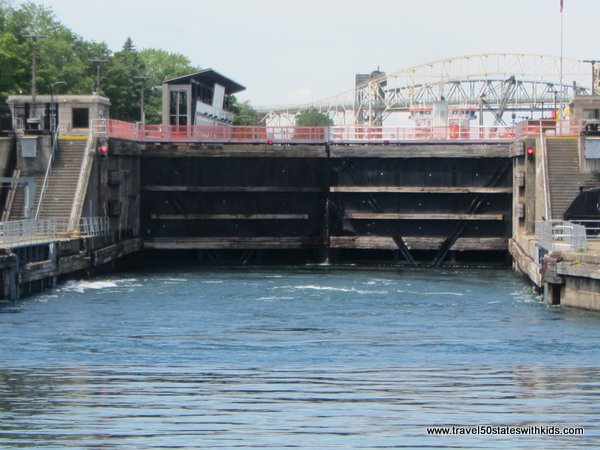 Do you see the red lights? Those are traffic signals, but there isn’t a yellow one, just red and green. We had to wait for the gates to open, the ship inside to exit, and the light to turn green. The gates opened wide so that they were flat against the walls of the lock. 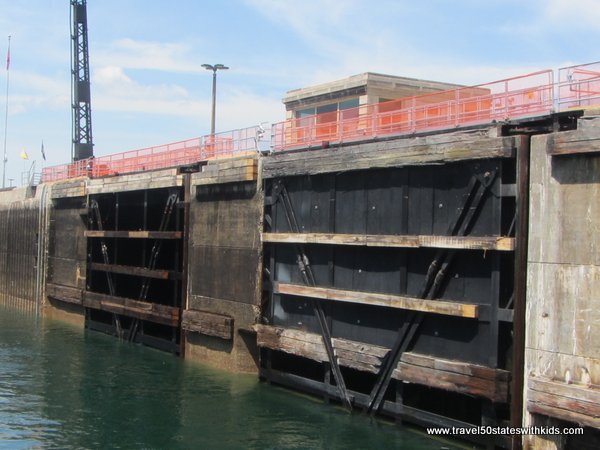 As we entered the lock, we noticed there was an observation deck. As an alternative or in addition to the boat tour, you can visit the Soo Locks Visitor Center. The center offers displays and a thirty-minute movie. Admission is free. 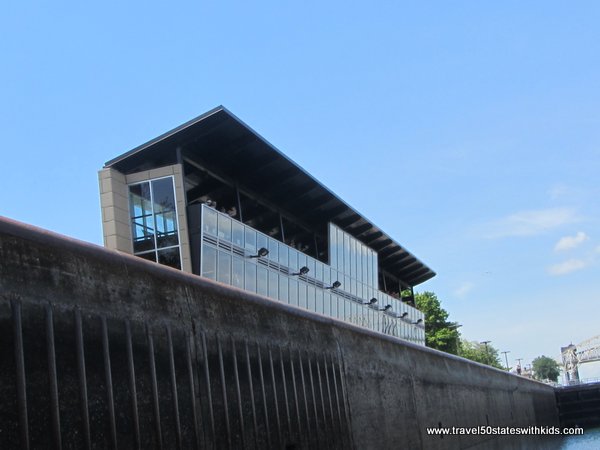 Once we were inside the lock, the gates closed behind us. 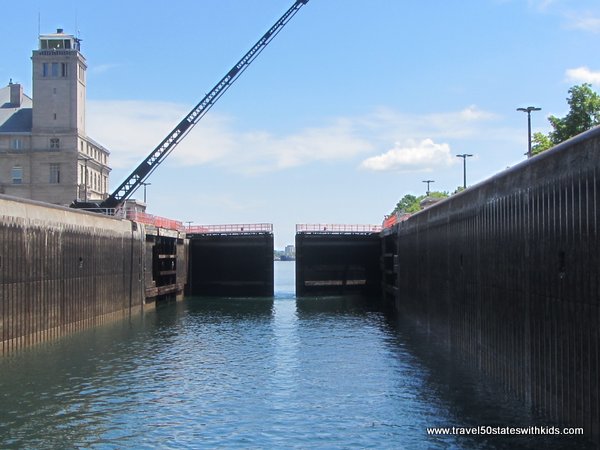 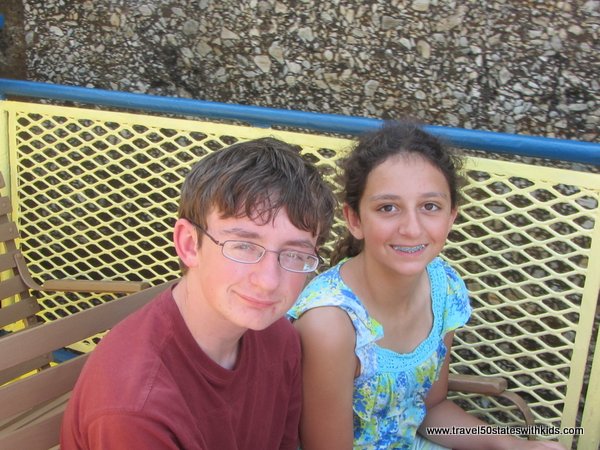 We were close enough to touch the wall and we did. The kids loved that. 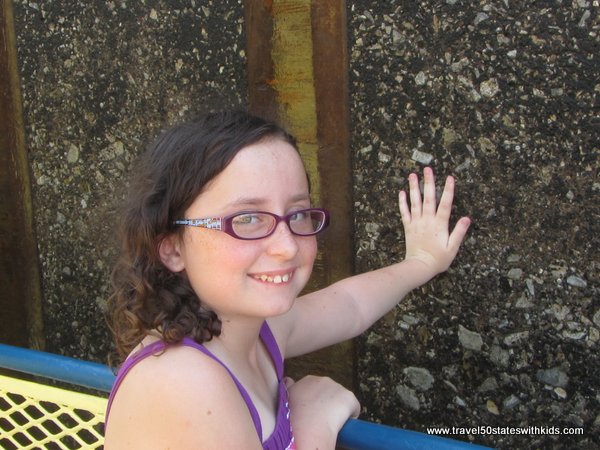 Then, water started entering the lock from the upstream side and like a very slow elevator, we went up. Even really young kids can appreciate this and can walk their fingers up the wall. After we reached the top, the gates opened and our boat exited. 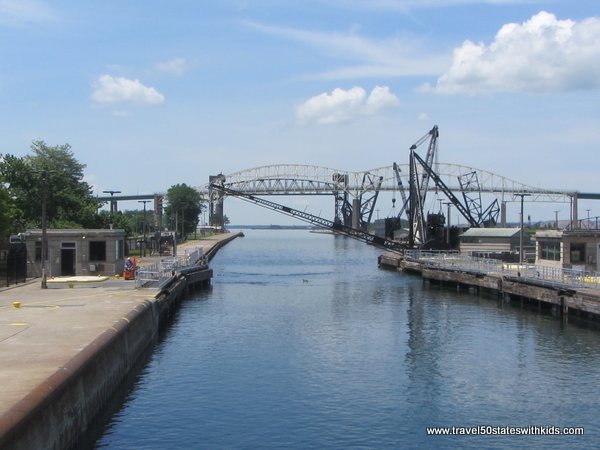 In the background you can see the Sault Ste. Marie International Bridge connecting the U.S. and Canada. This bridge marks the end of I-75. The double-arch span is on the U.S. side and a few pictures down you’ll see a single arch on the Canadian side. 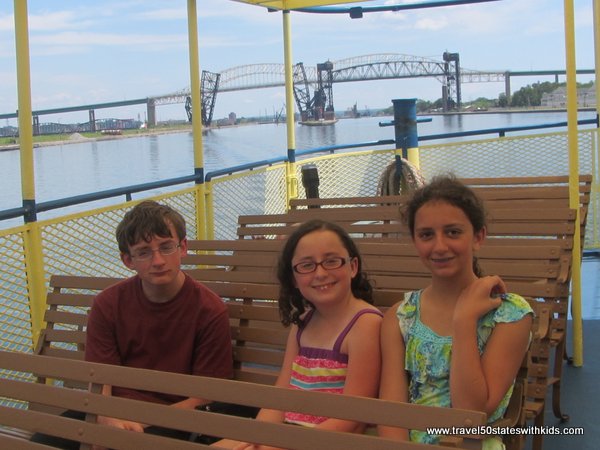 Once we passed through the American side of the locks, we turned around and “locked through” again, but this time on the Canadian side. Just in case you’re wondering, no passports are needed for this cruise because you don’t disembark in Canada. We saw a few sights on the Canadian side including a steel mill and some illiterate birds. 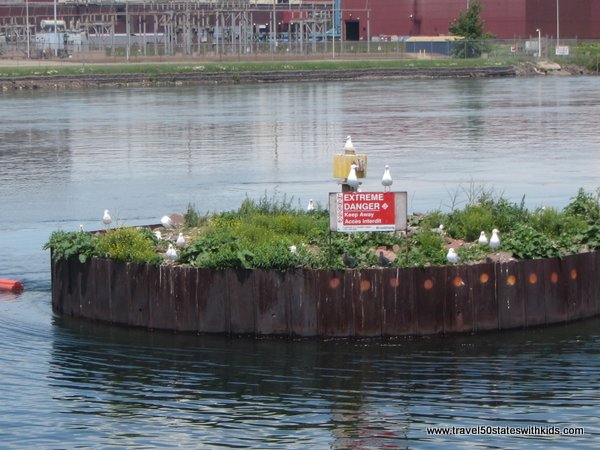 We then pulled into the Canadian lock and, to our surprise, a sailboat followed us in. The major shipping traffic uses the U.S. side, so tour and recreational boats typically use the Canadian side. 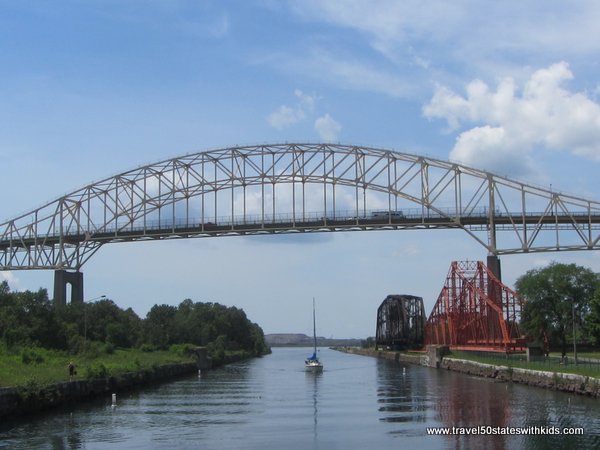 Did you notice the International Bridge in the picture? The single arch indicates we were on the Canadian side. 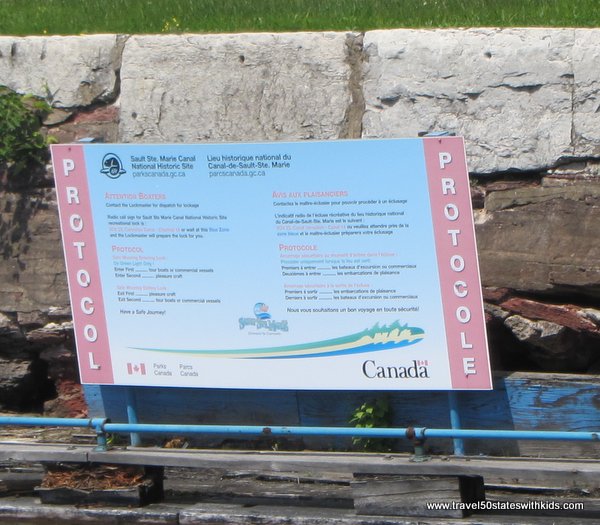 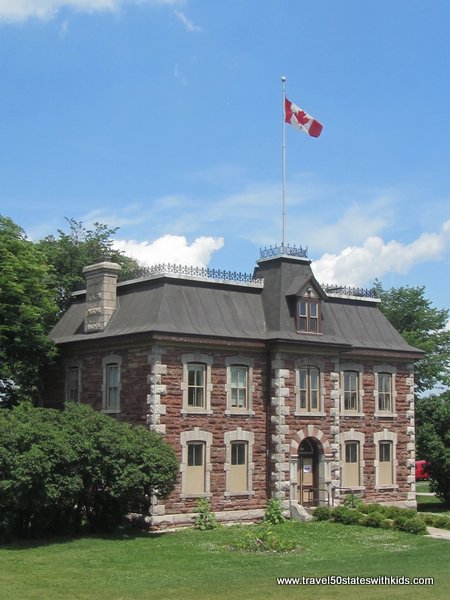 Though my kids had been out of school for a few weeks, we saw some Canadian schoolchildren. Since we were close enough to talk to them, we started up a conversation. We found out it was their second-to-last day of school and they were on a field trip. 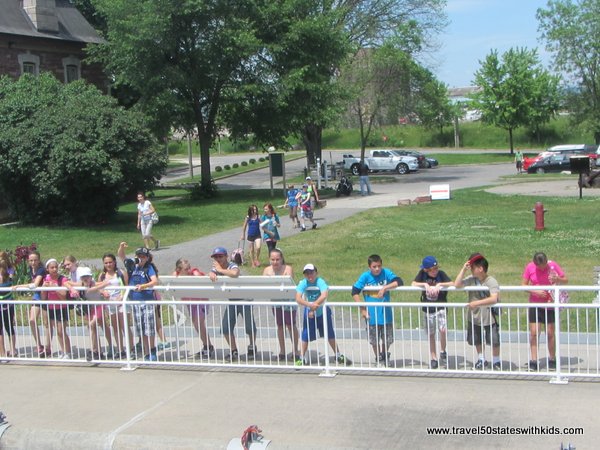 This really shows you the difference in the water level. When we started our conversation with the Canadian kids, we were above them. A few minutes later, we were below them. 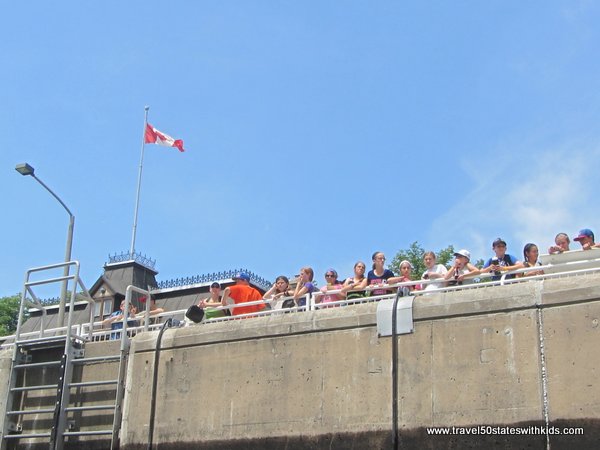 The gates opened and our boat, the sailboat, and the duck that went into the lock with us were on our way again. 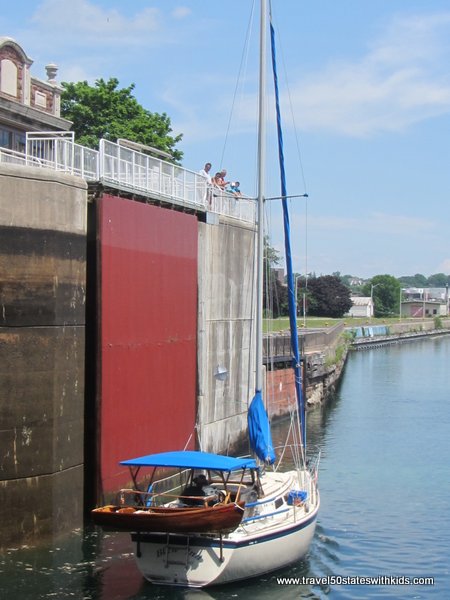 We didn’t have time to drive over to Canadian Sault Ste. Marie, so it was nice to see it from the water. 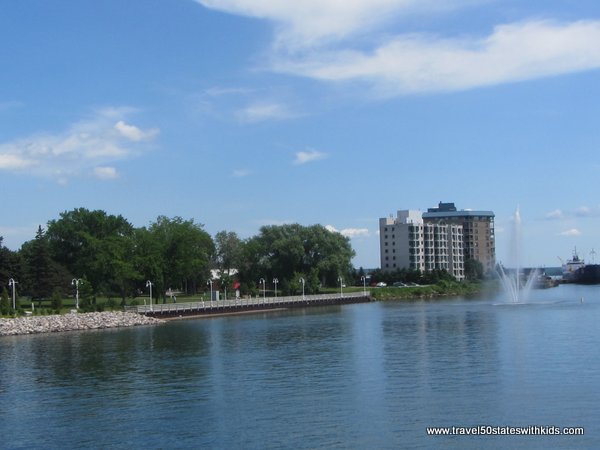 On the way back to the boat dock, we passed a Bushplane Museum on the Canadian side. I’ll have to put that on my list of places I want to visit on another trip.

The entire tour took a little over two hours. Though my kids enjoyed going through the locks, they were a little bored before we got to the locks. Visiting the snack bar onboard helped pass the time. I would recommend bringing along a quiet activity to keep kids occupied for the slower parts of the tour.