When most people think of war memorials, they think of Washington, D.C., because that’s where most of the national war memorials are. But World War I is an exception. Its memorial is located in Kansas City, Missouri, and unlike the memorials in D.C., it is not part of the National Park System or federal government. The citizens of Kansas City raised over $2.5 million in just 10 days 1919 to build the memorial. The tower was completed in 1926 and the museum was added later. In 2004, Congress designated it the nation’s official WWI museum. Since 2014 marks 100 years since the start of World War I, I thought this the perfect time to explore this museum and memorial. 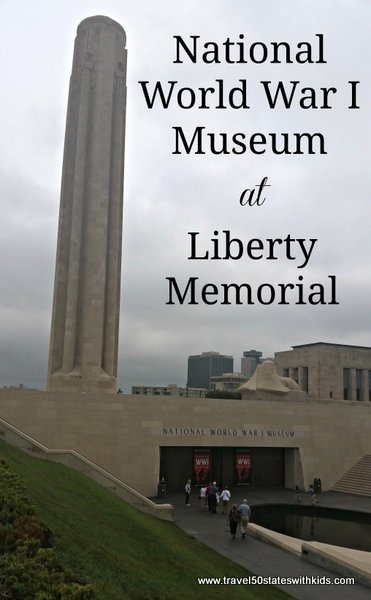 Liberty Memorial is well worth a visit for people of all ages. Admission is not required to walk around the grounds and see the base of the memorial. 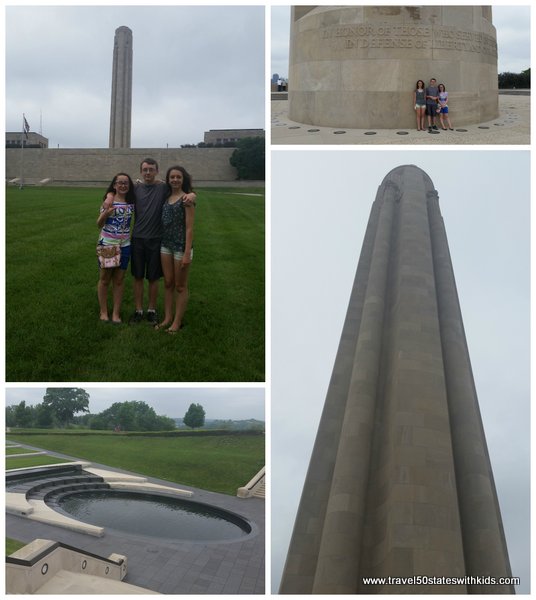 From the base of the memorial, there’s a beautiful view of Union Station and the Kansas City Skyline. 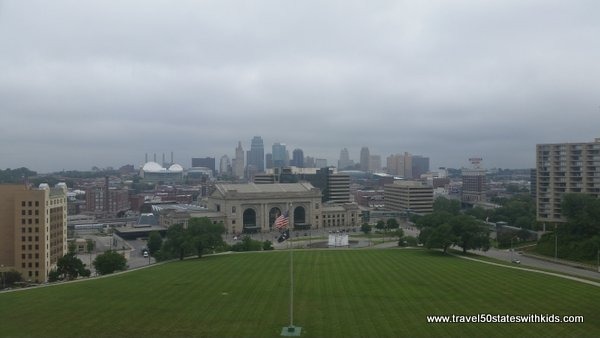 If you want an even better view, you can pay $5 to travel up the elevator to the top of the memorial tower. If you also visit the museum, the tower elevator is included with admission. 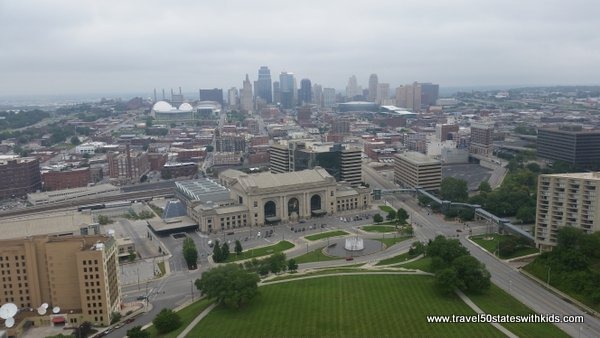 Note: only seven people can fit in the elevator at a time and a line can build up. We went first thing in the morning and didn’t have to wait at all.

If you are traveling with very young children, I would recommend visiting the memorial only and skipping the museum. The museum is excellent, but because of the subject of the museum (war), I think it’s best for ages 12 and up. If you plan to bring younger kids, I’d recommend getting a Family Guide. You can either print one or pick up a free copy in the Museum Store. This booklet has a scavenger hunt and other activities that will help hold the attention of younger kids.

The main gallery of the museum is located underneath the memorial tower. Upon entering the museum, you must cross a glass bridge to reach the exhibits. This area sets the tone for your visit. The bridge spans a field of 9,000 poppies. Each one of the poppies represents 1000 deaths during the war. 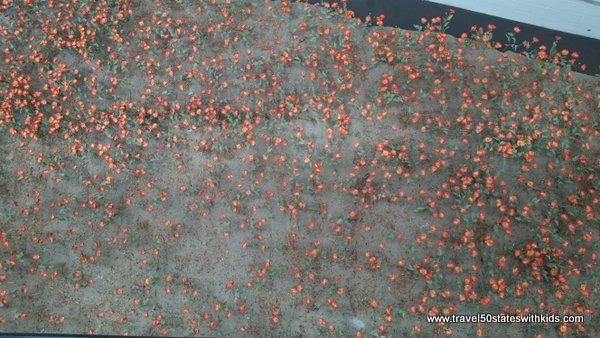 9 million people is a hard number to visualize, but this poppy field helps visitors grasp just how many lives were lost during the Great War. A glass ceiling over the bridge allows you to see the memorial above. A volunteer showed me where to stand to take a picture of the poppies with a reflection of the memorial on the glass bridge. 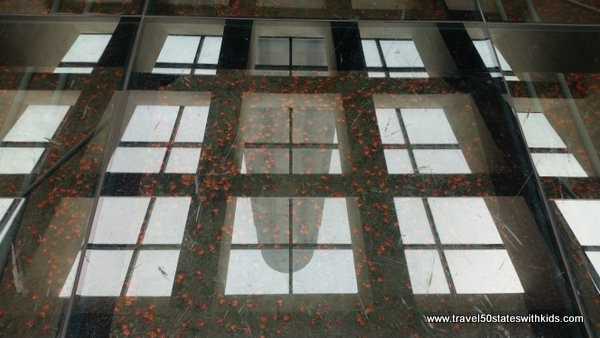 Our next stop was a theater that shows a 12-minute introductory film. This is an interesting film that helps visitors understand the world events that led up to the war. The circular museum is divided into sections. Go counter-clockwise through the museum for a chronological look at the war. One section covers the early years of the war, 1914-1917, before the United States States entered the war. The next section of the museum is the Horizon Theater that shows at 15-minute program about the question of whether America should enter the war. The third section of the museum covers the years 1917-1919, and American involvement.

This exhibit shows the losses of soldiers by country. 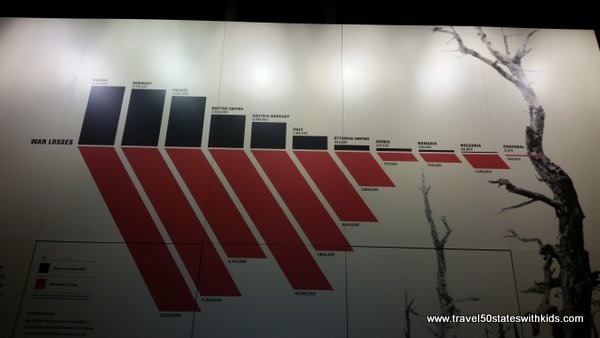 We also saw weapons and vehicles. 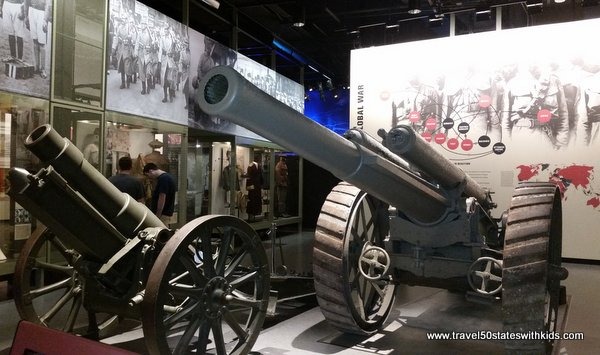 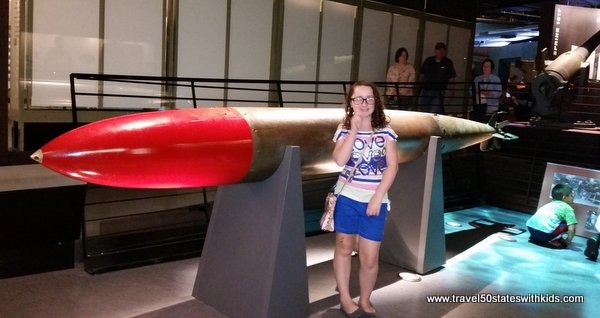 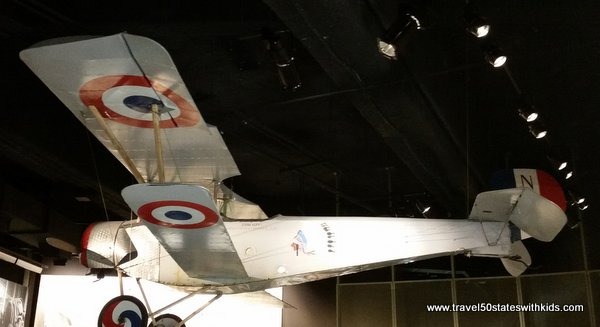 Several uniforms are displayed, including these nurse uniforms. 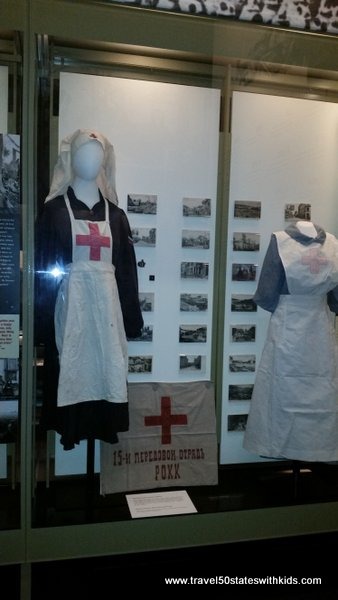 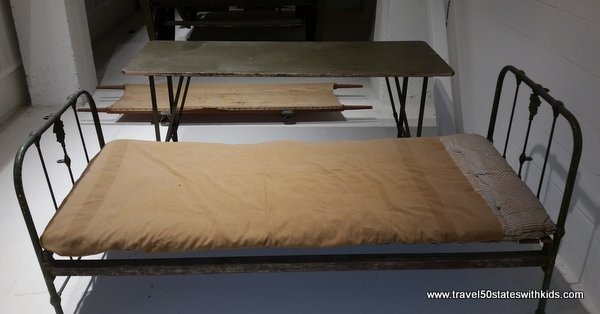 The war posters are interesting. 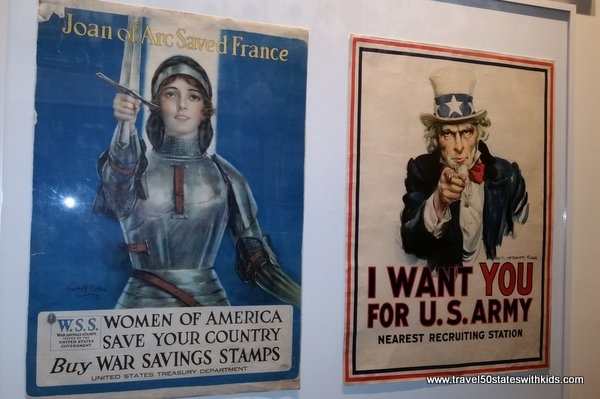 Our favorite exhibit area was the interactive tables. Each table has several stations with multi-media exhibits and light pens. We spent quite a bit of time in this section. One exhibit shows how a machine gun works. Another allows you to combine different elements to make your own war poster. 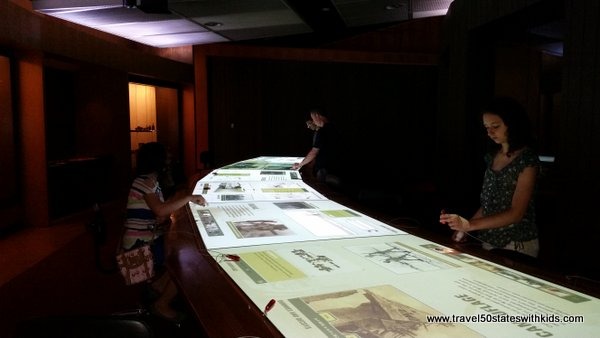 Above ground there are two additional buildings that house temporary exhibitions. In addition to the exhibitions, these buildings have beautiful murals. 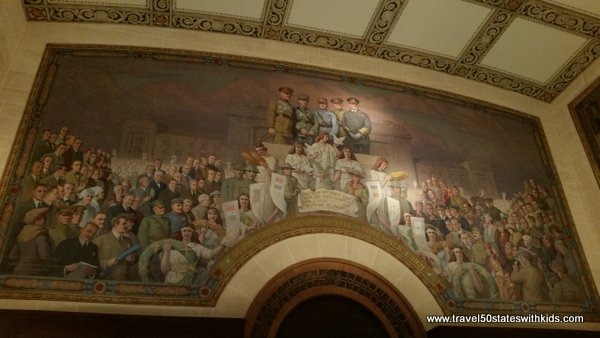 We spent a couple hours exploring the museum, but to explore all the exhibits in detail would have taken much longer. I would love to go back again someday. My son said that every war needs a museum like this.

Disclosure: We received complimentary admission to the museum so that I could research and write this article. Many thanks to the Kansas City Convention and Visitors Association for coordinating our trip.