New Hampshire is nicknamed the Granite State and I think any trip to New Hampshire with kids ought to include some interaction with some of that granite. Lost River Gorge and Boulder Caves in the White Mountains was our choice on a whirlwind tour of New England several years ago. This scenic spot was recommended to me by a friend with kids the same age as mine who had spent a week in the White Mountains on vacation. We had allotted only a day and a half in the beautiful White Mountains, and with so many sightseeing options to choose from, we had to make some tough decisions and relied heavily on my friend’s advice. She said that Lost River Gorge and Boulder Caves was a huge hit with her kids and I felt confident that mine would love it as well. We were right.

The “caves” in this gorge aren’t truly caves, but are pockets of space between giant granite boulders that once tumbled down from the walls of the gorge. These boulders became the building blocks that Mother Nature set in place to make a natural playground that will certainly excite kids who love to climb. Boardwalks and staircases were added to make this area accessible to us non-climbers. At some points along the trail you can choose to bypass the caves and rejoin the rest of your group on the other side. 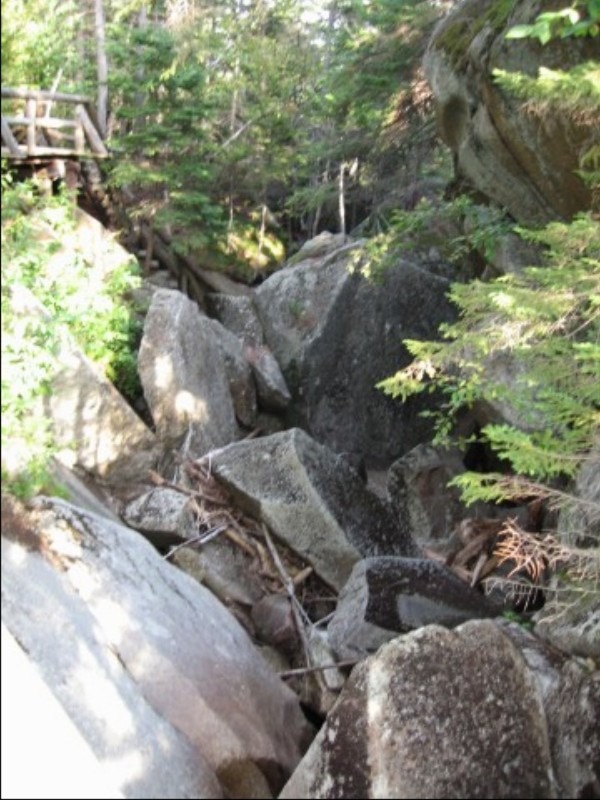 This next picture reminds me to write that good supportive shoes are a must on your visit. It can get nippy in the mountains, so a light jacket or sweater would be a good idea too, even in the summertime. We went in August and you can see my kids had jackets. 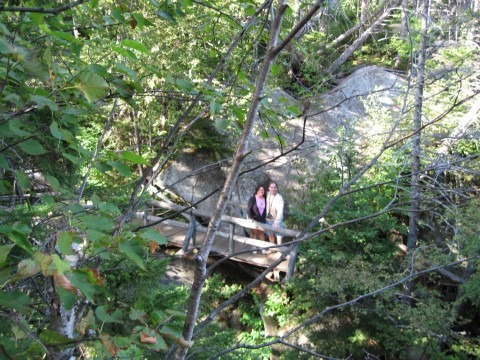 Over and under the boulders, kids love to find tiny spaces that seem like they were created just for them.

There are lots of great photo ops all through the trail. The brook that flows through the gorge sometimes disappears beneath the boulders (hence the name Lost River), then will peek out again at times, like this waterfall. 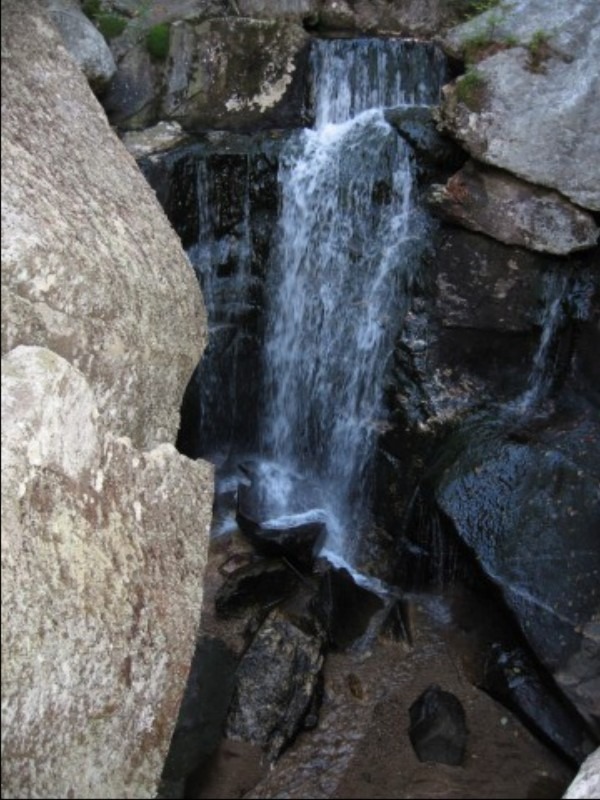 A boardwalk provides an interesting vantage point to view the falls. 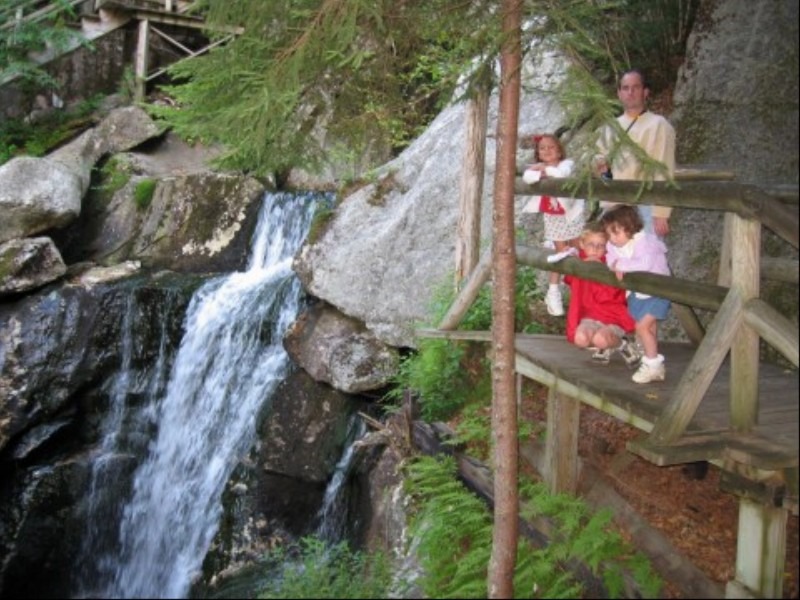 There are about 1200-1300 steps to climb down and back up. It’s not as bad as it sounds though. At the beginning of the trail you descend quickly, then the ascent is slow, a few stairs at a time. My youngest was not quite four years old on this trip and did fine. I’m not sure I’d want to bring a two-year-old on this one though. 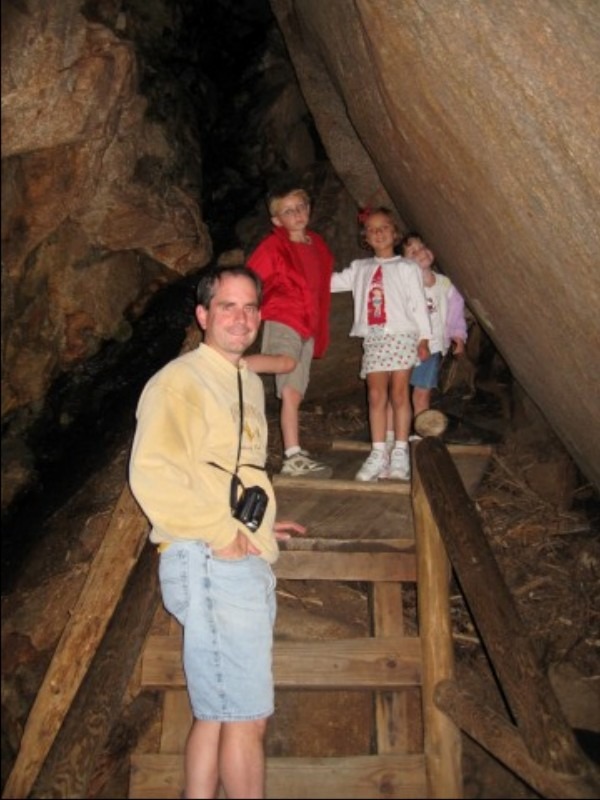 My kids found some places to rest along the way. If you don’t care to lie on rocks, there are benches along the trail.

Even though my kids were younger when we visited, this is the type of attraction that they would love just as much now, in their tween and teen years. They seem to enjoy climbing on rocks as much as going to an amusement park. 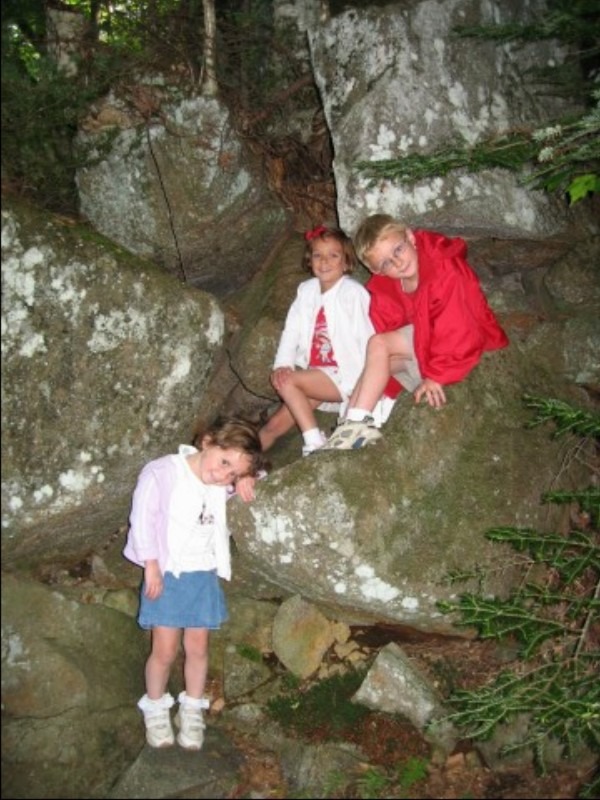 This next picture is a rare photo of my husband and me together. It was taken by my daughter who was six years old at the time.  Not bad, huh?

The White Mountains have such amazing natural beauty, don’t you agree? I’m not sure that people outside of New England think about the White Mountains when they are considering vacation destinations, but having been there, I think this part of the country deserves a spot on everyone’s bucket list. On your visit to Lost River Gorge and Boulder Caves, you can also search for gemstones at their mining sluice. If you’re up for even more adventure, they also offer nighttime tours of the gorge with lanterns and headlamps. They’ve even added a new section of boardwalk since I’ve been there that includes an overlook where you can view a pothole created by a whirlpool in the river and old-growth forest.