Are you familiar with UNESCO and their World Heritage Mission?

The United Nations Educational, Scientific and Cultural Organization (UNESCO) seeks to encourage the identification, protection and preservation of cultural and natural heritage around the world considered to be of outstanding universal value to humanity.

UNESCO maintains a list of World Heritage Sites that meet at least one of ten selection criteria. There are now over 1000 sites all around the world on the list, including well-known sites such as The Pyramids of Egypt, the Great Barrier Reef, and Macchu Pichu. The list includes a bunch of lesser-known sites too. 22 sites are in the United States; 10 of them made the list for their cultural significance and the others for their natural significance. I haven’t made it to all of them yet, but I would like to. On our big summer trip this year (Trip 5 in my ebook), we visited three of the cultural sites and one of the natural sites. This week I’ll be writing about the three cultural sites we visited, along with what happened when we tried to visit a fourth. First up is Taos Pueblo in New Mexico. 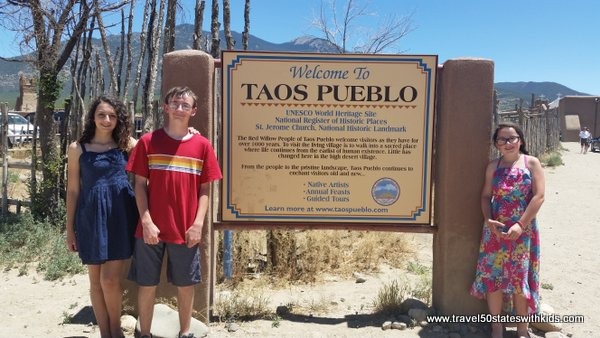 Taos Pueblo is considered to be the oldest continuously inhabited community in the United States, having been inhabited for over 1000 years. What a treasure! How cool is it that they allow the public to visit? 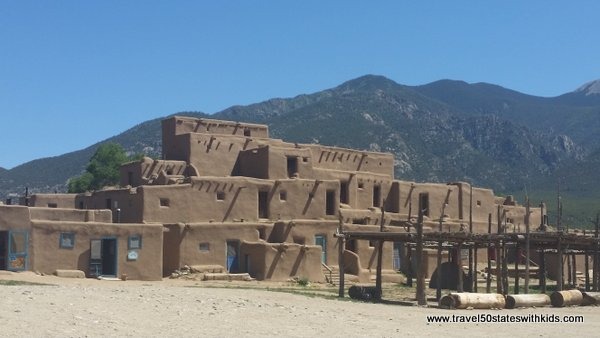 About 150 people reside in the community which doesn’t have electricity or running water. My kids were amazed that people would choose to live without those conveniences. I highly recommend taking a guided tour. There is no set fee for the tour, but tips are appreciated by the volunteer tour guides. Our tour guide was a college student who was born and raised in the village. The tour lasts about 20 minutes and is a walking tour through the village. The guide gives an overview of Pueblo history and heritage. The buildings are constructed of adobe. Bricks are made of dirt, straw, and water that are mixed and poured into forms. They are dried in the sun, then stacked and bonded with more adobe mixture. The exteriors are plastered annually with adobe. 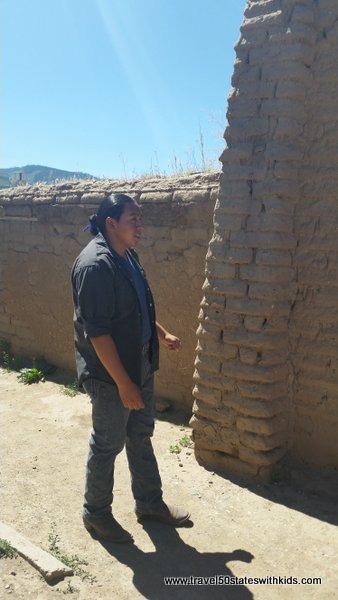 We learned that the buildings did not originally have doors or windows so that they were better protected when attacked by Apache, Ute, or Comanche tribes. People entered the buildings by climbing a ladder and descending through an opening in the roof. When the village was attacked, the ladders would be pulled up onto the roof. By the late 1800s, there were no longer threats of attack, so doors and windows were added and many of the roof openings were converted to skylights. 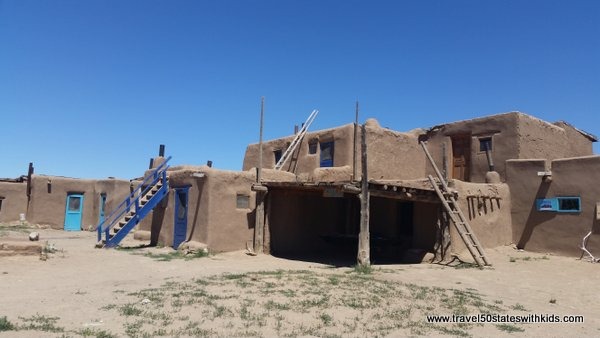 Did you notice that the doors and windows are blue? It is believed that the color blue wards off evil spirits. Our tour guide showed us the river that runs through the village. Residents obtain water from the river for drinking and bathing. They also fish in the river. 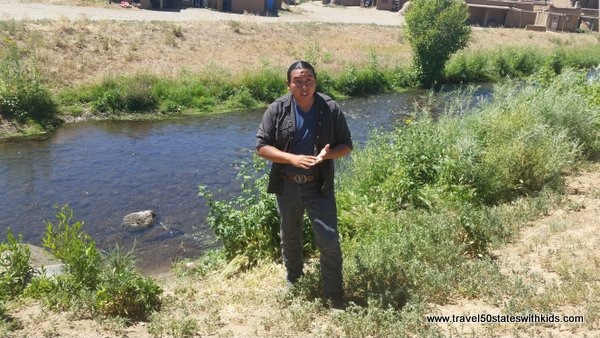 The homes have adobe fireplaces inside each building to heat the home and for cooking. 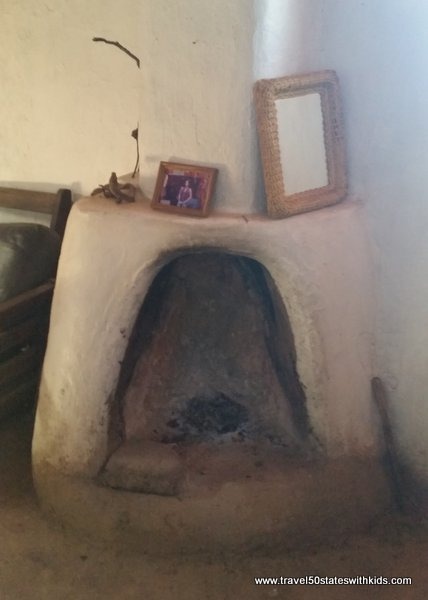 Many of them also have an outdoor adobe oven for baking bread, cookies, and other goodies. 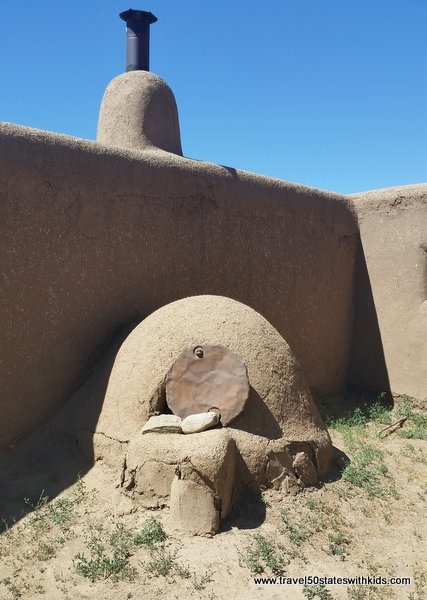 The community includes San Geronimo Church. Although the church was established in 1619, it was attacked twice and had to be rebuilt. This building was built in 1850 and is one of the newer buildings in the community. We learned that about 75% of the people at Taos Pueblo participate in the church. 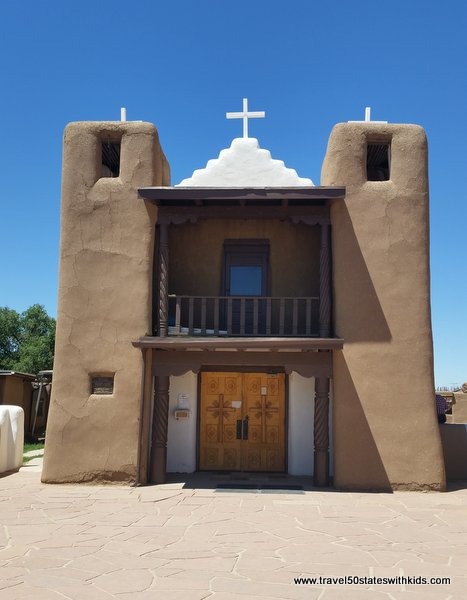 Our tour also included the cemetery, which also shows the Christian heritage of the community. The cemetery is where the original church building once stood. 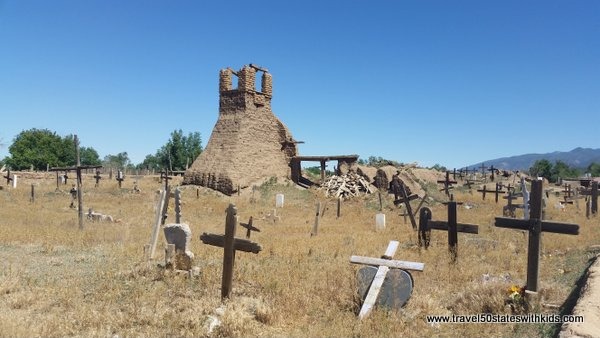 A few parts of the village are ceremonial areas that are off-limits to visitors. Additionally, the wilderness areas surrounding the village are sacred sites and restricted to tribal members. The forests around the village are rich with wildlife including elk, deer, black bears, and wild turkey, which are hunted by the Pueblo men.

After our tour ended, we were encouraged to wander around the village and visit some of the many shops. Many of the residents are artisans who sell their beautiful work. 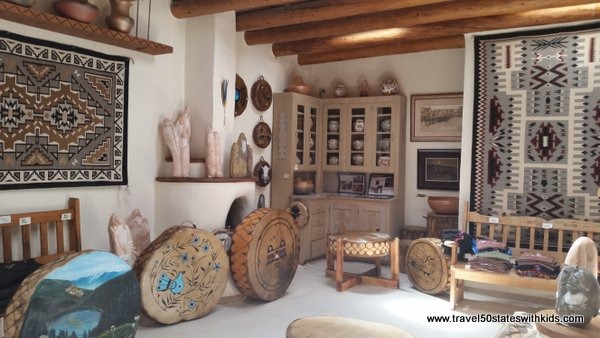 You can find rugs, pottery, jewelry, leatherwork, and more. 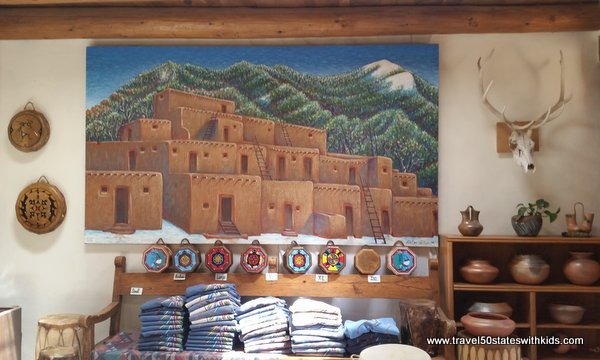 There are full-size shops like this one, plus many small shops inside people’s homes. 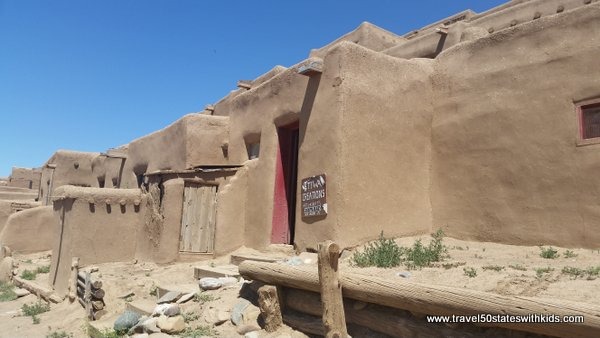 We really enjoyed browsing (and buying some of) the many different items for sale. There were also several shops that sold food. We bought cookies and bread that had been baked in the outdoor adobe ovens. Yum! 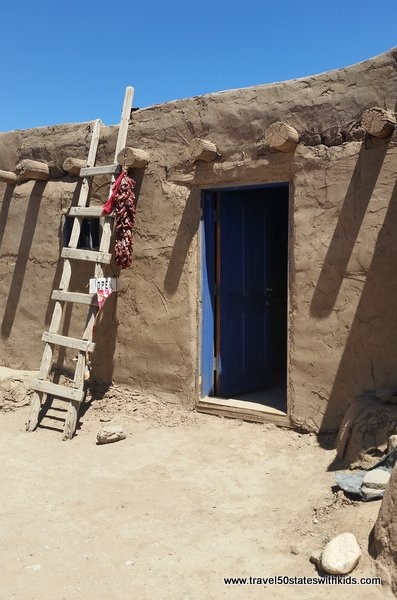 Our visit to Taos Pueblo lasted a couple of hours and was fascinating. I was thrilled that the Pueblo people so readily shared their culture with us. When you visit, please be respectful and follow the rules so that future generations can continue to enjoy this treasure.

Disclosure: I received complimentary admission to Taos Pueblo as a member of the media. We paid regular admission for the rest of the family. My opinions are my own, as always.