Sometimes I am ultra-detailed in my vacation planning. After all, if you want to visit all 50 states, you do need to have a plan. But that doesn’t mean that I’m afraid to be spontaneous. I love to travel and when an opportunity presents itself, I usually jump on it. Last summer, my husband had to go on a business trip to Cleveland, which is a four-hour drive from where we live. You know what that means, right? Free hotel! It isn’t often that my husband travels somewhere within driving distance while the kids are out of school. In fact, this was the first time we’ve ever joined him on a business trip. It was also the least prepared I’ve ever been for a trip. My husband rode with his boss so they could discuss business. The kids and I jumped in the minivan and I handed a bunch of guidebooks to the kids and told them to pick some attractions while I drove.

The first attraction my kids decided on was the Cleveland Museum of Natural History. This museum is a member of the Association of Science-Technology Centers, and because we are members of our local science museum, we were able to get in free with the reciprocal agreement. Here are my kids outside the museum. This part of the building is the planetarium, which we unfortunately didn’t have time to see. 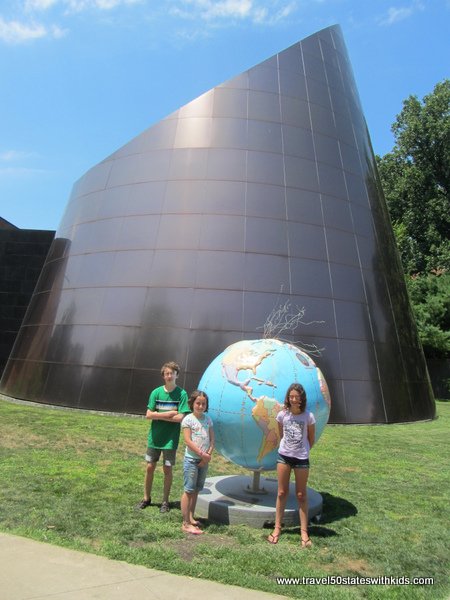 Even though we are members of our local natural history museum, Cleveland’s museum is completely different from ours, so we didn’t feel like we were seeing the same things again. The first exhibit we visited was the Sears Hall of Human Ecology. It reminded me of the Smithsonian Museum in the way that animals were stuffed by a taxidermist and displayed in native settings. The scenes were displayed at eye level and above. 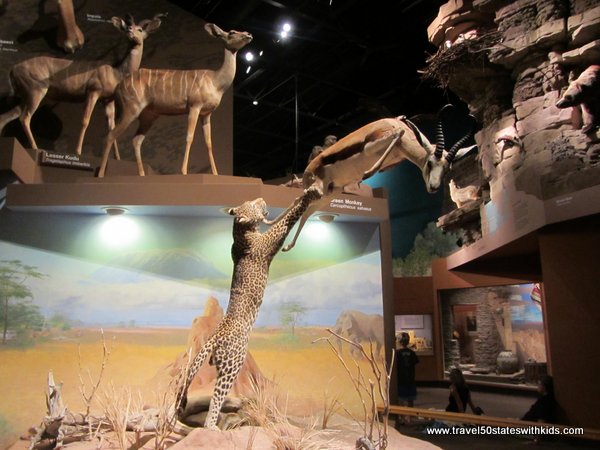 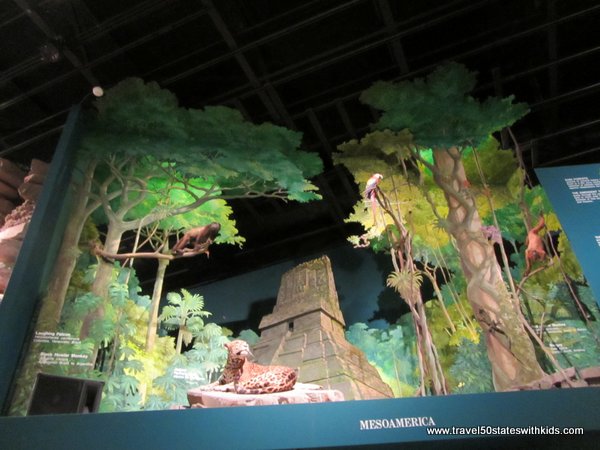 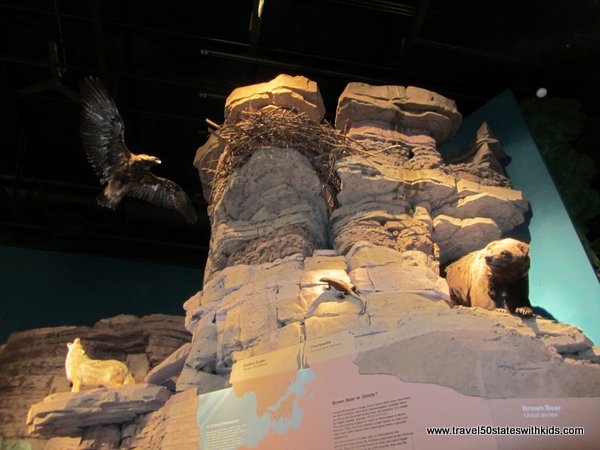 One of the displays completely surprised me. 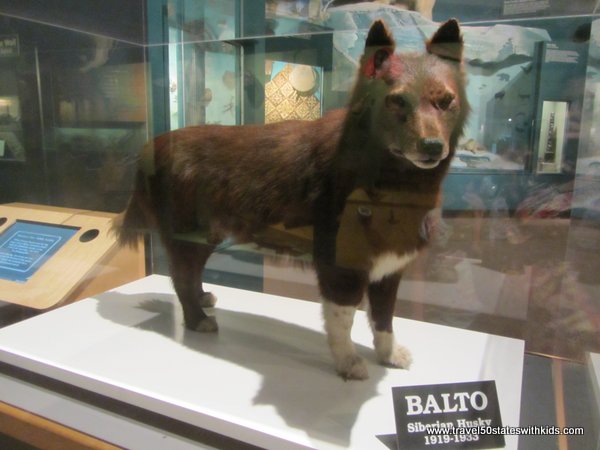 This is Balto, the famous Siberian Husky who led a team of sled dogs during the final leg of a journey from Anchorage to Nome, Alaska, to deliver a diphtheria antitoxin serum during a serious outbreak. This voyage inspired the Iditarod Trail Sled Dog Race which is run in March each year.  We learned a lot about the history of the race when we visited the Iditarod Headquarters in Wasilla, Alaska. If you click through to that article, you can see a picture of my daughter with a statue of Balto. So, imagine my surprise to find out that the real Balto was down here in Ohio! Of course, I had to do some research to find out how Balto ended up in Ohio. After becoming famous, Balto and other dogs joined the vaudeville circuit where they were, unfortunately, mistreated. After this came to the attention of Cleveland businessman George Kimble, he worked with the newspaper to bring Balto and his companions to the zoo in Cleveland where they lived the remainder of their lives. After his death, Balto’s body was donated to the Cleveland Museum of Natural History. Alaska did try to get Balto back, and while the museum decided not to part with him permanently, they did loan him to the Anchorage Museum of History and Art for several months in 1998. While researching this, I also found out that Balto was also commemorated with another statue in NYC’s Central Park. (Adding that to my bucket list!)

Another exhibit we really liked in this museum was the 2-acre outdoor wildlife center where you can see animals and plants that are native to Ohio, like this cute little fox. 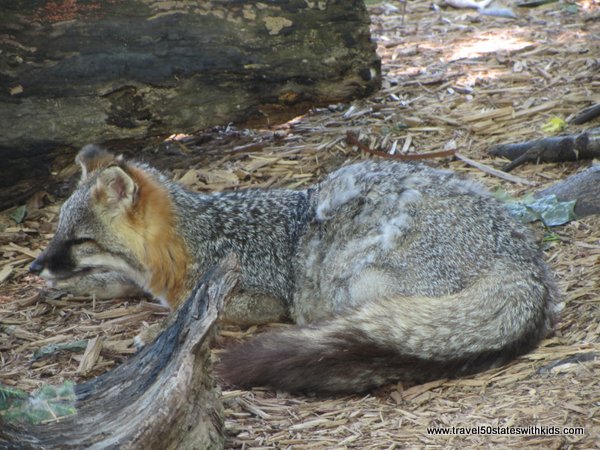 And we got to see a raccoon go swimming. 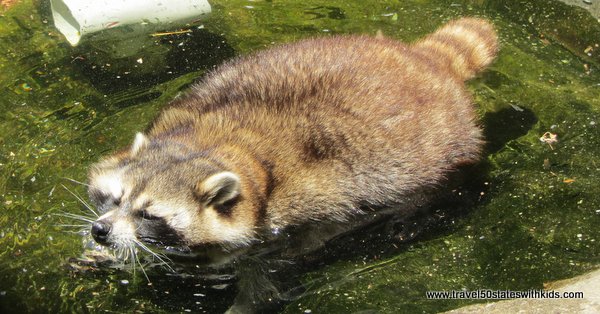 If you don’t like to watch otters play, there’s something wrong with you. 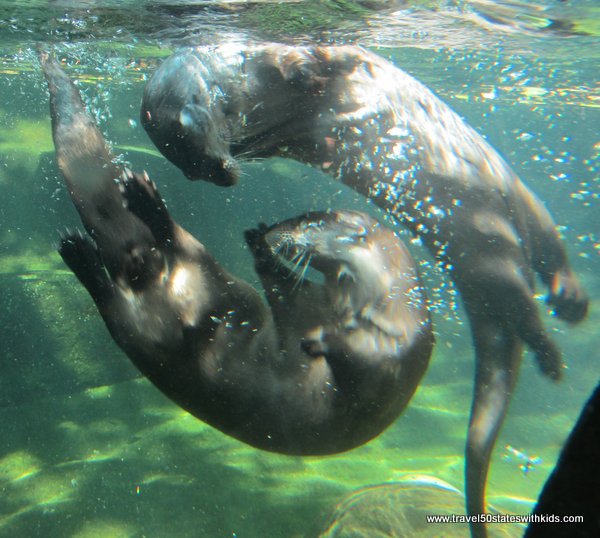 There were also several birds including falcons, hawks, eagles, and owls. And there’s deer and a bear–the friendly type that lets kids climb on his back. 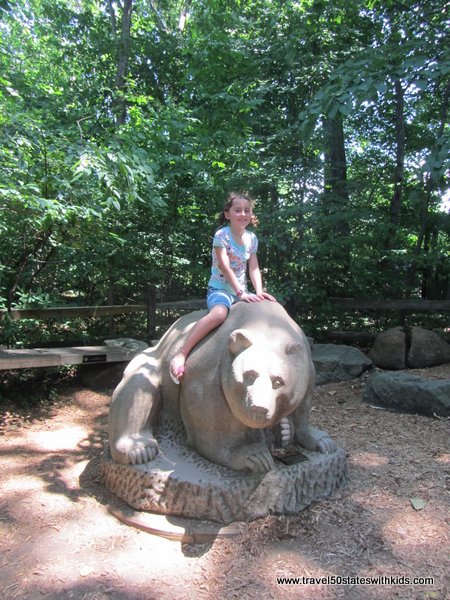 Back inside, we moved on to the fossil section where we enjoyed the dinosaur skeletons. 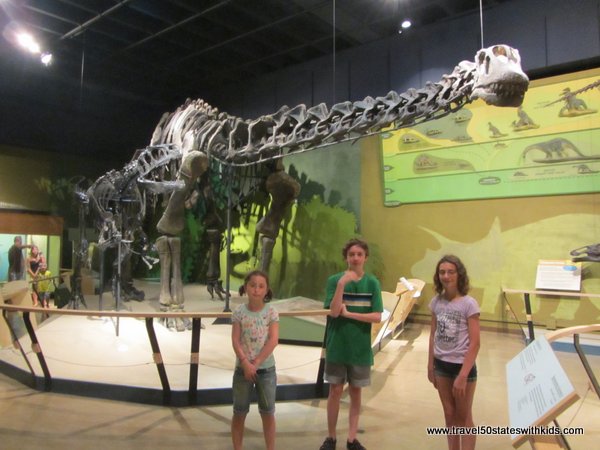 The museum also had a nice section about earth science. One of the exhibits allows kids to feel a simulated earthquake. My California readers are probably thinking, “No thank you,” but here in Ohio we don’t experience earthquakes all that often, so they are a novelty. 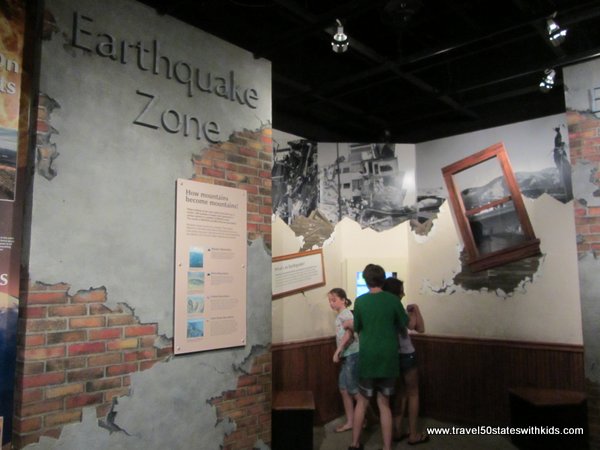 Various rocks, ores, crystals, and gems were also on display. 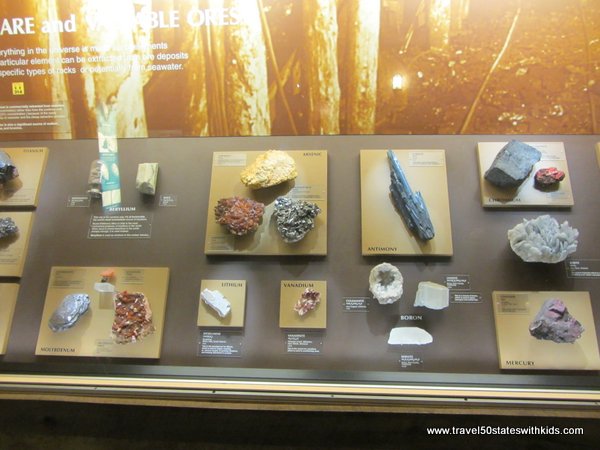 Check out this display of opals. Gorgeous! 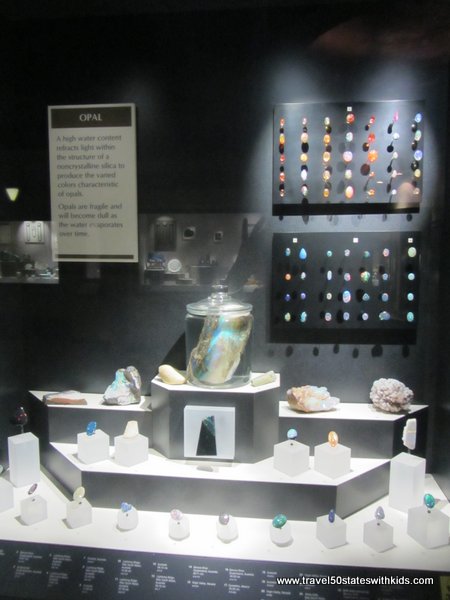 And because Ohio was home to Neil Armstrong, we get more than our fair share of space exhibits, including this moon rock. 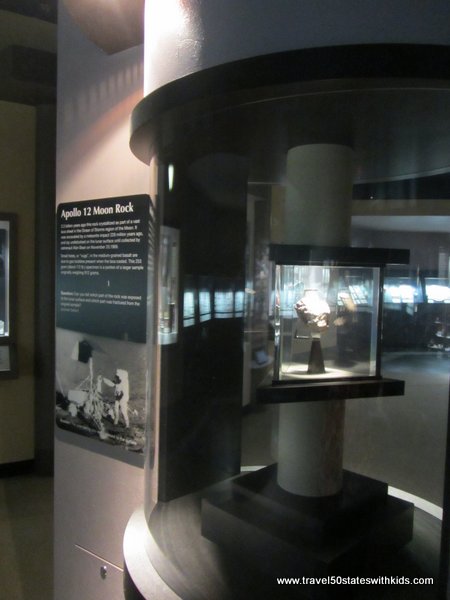 In the lower level, you’ll find the Smead Discovery Center, with lots and lots of hands-on exhibits and activities for kids. 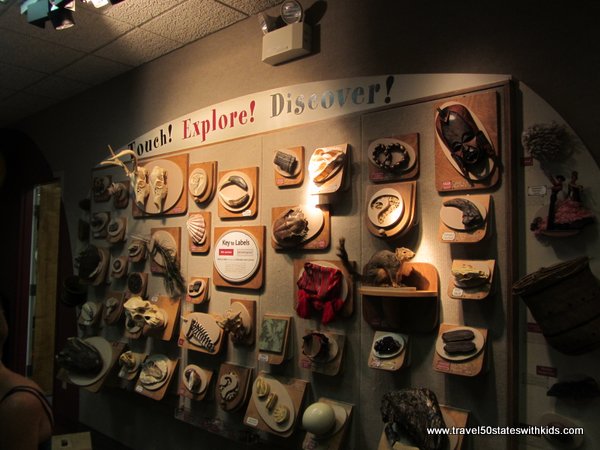 Tables and drawers are filled with all kinds of things kids can touch. They can also pretend to be an archaeologist and dig for dinosaur bones. 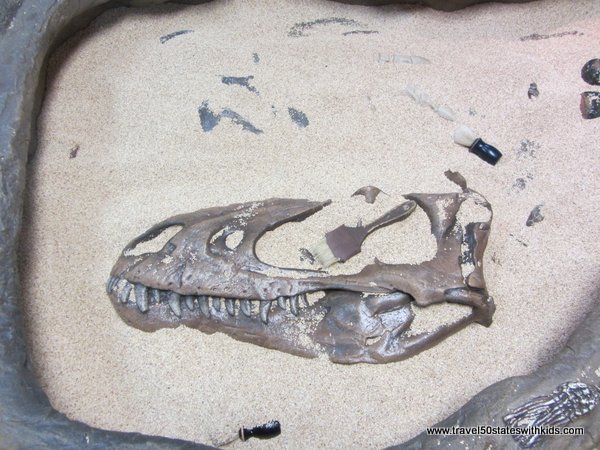 The lower level hallways are filled with collections of various plants and animals. If you look closely, you’ll see that whoever put together these displays has a sense of humor. Check out the beetle display. 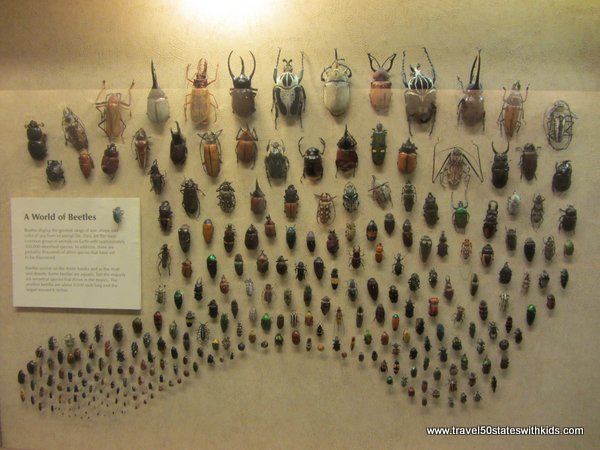 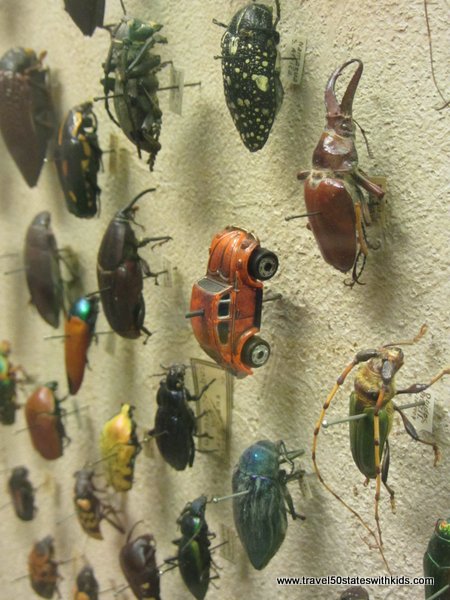 Cute, huh? I also spotted a chocolate Easter egg in a bird’s nest.

There was a display on venomous and non-venomous snakes, but I won’t post any pictures. Some of my readers weren’t too happy with me after I posted about a snake program we attended in West Virginia, and I don’t want to scare anyone away. 🙂

How about some nice, pretty leaves? No ick factor there! 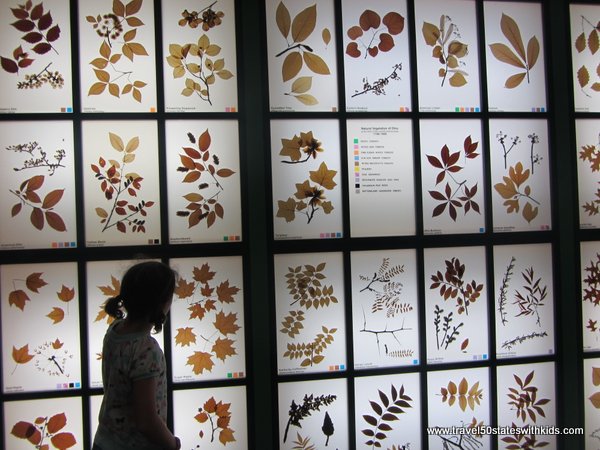 The museum also has space for temporary exhibits. At this writing, there temporary exhibits include Mystery of the Mayan Medallion (through May 5, 2013 – hurry!), Megalodon: Largest Shark that Ever Lived and Sharkabet! A Sea of Sharks from A to Z (through Sept. 1, 2013).