If you’ve read my book, then you may have read about Jungle Jim’s International Market, an amazing grocery store on the outskirts of Cincinnati. Recently, Jungle Jim’s opened a second store that’s even bigger than the original store and my checkout clerk told me that it is the largest grocery store in the United States. Wow! And this one’s even closer to my house. The nice part about having a blog is that not only can I tell my readers about the latest and greatest, I can show you pictures. When I told my sister over the phone about our visit to Jungle Jim’s, she doubtfully asked, “How could you spend three hours in a grocery store?” Sometimes you just have to see it to believe it, so I’m going to give you a tour through the new Jungle Jim’s International Market Eastgate store and show you why a travel writer would bother writing about a grocery store. How many grocery stores greet you with a monorail sticking out of the front of the store?

Unfortunately, it’s not a working monorail. This monorail used to run at Kings Island. It looks like there are people on it, but they’re really animal silhouettes. You can see them a little better in this next picture.

I took this photo because I thought it was really neat that the sign said “Jungle Jim’s Salutes American Steel Workers.” My parents came with us on our visit because they were visiting from Pittsburgh.  My dad is, you guessed it, a retired steelworker. (You may have read in my American Sign Museum post that he is also a retired sign painter. Yes, he worked two jobs.) I read in Jungle Jim’s bio that his father was also a steelworker. The steel beams came from a WWII submarine factory. Since the store is so new and so big, they were handing everyone a map when they walked in. I don’t know if they’ll continue to do that, but there was also a map on the wall and they have one on their website. They even have a route through the store plotted on the map.

Jungle Jim’s houses several small retailers inside and outside of the store. The first shop you encounter after entering is a Caribou Coffee.  Jungle Jim’s has conveniently designed the shopping carts so that they have a drink holder to put your coffee in while you shop. Next up is a Sushi station and several other small stores. If you want to learn more about the history of Jungle Jim’s, don’t miss the Theater where you can watch a short film about how it grew from a produce stand into the pair of gigantic stores it is today. After that you’ll find the portable toilets.

Portable toilets inside the store??? Not really. I was happy to see they copied this design feature from the original store. The portable toilets are just the entry into a regular bathroom with regular plumbing.  The original store received awards for their bathrooms. (I’m not sure who gives bathroom awards or why, but they do.) Each of the major departments in Jungle Jim’s has a giant prop of some kind in it. The International Foods section is marked by a pirate ship overhead.

In my opinion, this is one of the highlights of a trip to Jungle Jim’s and the reason it attracts so many international families living in the area. It is also a fun way to expose kids to international cuisines if you don’t have a large enough vacation budget to take them abroad. This section is organized by region and country.  Here’s a picture of my (100% Polish) mother on a search for pickles in the Poland aisle.

We found lots of interesting and exotic foods in this section. I had to hush my daughters when I heard them say, “Oooooh, gross!” I corrected them and told them it wasn’t polite to say anything out loud. Instead, you quietly take a picture to post on your blog. Some Refreshing Grass Jelly, anyone?

How about a Green Bean Popsicle-type treat?

In the exotic egg section, you can find a giant ostrich egg for $39.99.

Or, if that’s too big for you, how about some tiny quail eggs?

Now, before you start thinking that the entire store is filled with things you wouldn’t buy, I’ve got to show you the spice aisle in the Indian section. They have lots of big bags of spices at very reasonable prices.

I ordered my daughters to find something they’ve never tried before. They were drawn to sweets and snack foods. That was OK with me if the end result was expanding their view of palatable foods.  We came home with Sugar Coated Fennel (looks like ice cream sprinkles) and Boondi (spicy snack balls made from chick pea flour). Another feature that has been replicated from the original store is the Hot Sauce Department.  Yes, you read that correctly. There is an entire department of hot sauce. Serious hot sauce lovers will not be disappointed. And the prop to help you locate that department is an antique fire truck.

There’s even a locked cabinet of premium hot sauces. Look at the price on this one.

I’m not sure if it’s wise to eat anything that has a picture of a skull on it, but to each his own. That wasn’t even the most expensive brand.  the most expensive was was $136.19. It had a warning posted on it that says, “CAUTION:  Hottest Known to Man.” If any of my readers decide to try any of these and live to tell about it, please leave a comment in the comments section. There’s also a department with the regular groceries. It has some fun props in it.  I’m not sure if today’s kids are familiar with the Flintstones, but they certainly should recognize Thomas the Tank Engine.

If you look below Thomas, you see a cartoon-like picture of Jungle Jim with the words “Price Magic” written on his hat. These are the signs that mark the aisle numbers. It was right about this time in our visit when we saw a wizard walking through the store and chased after him until we caught him and forced him to pose for a picture. It was none other than Jungle Jim himself. 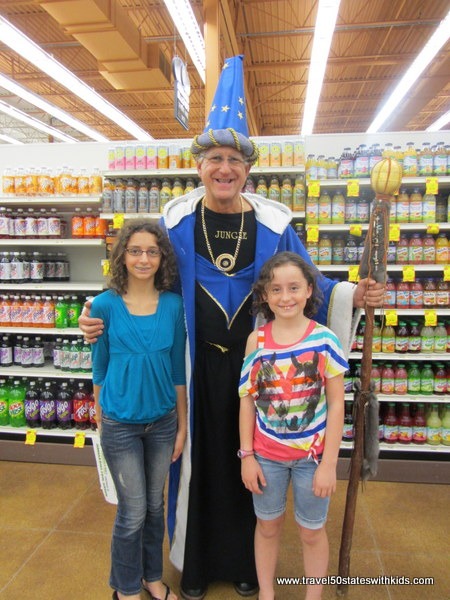 Next up is the Seafood Department. This area wasn’t stocked yet when we were there (just a few days after they opened), but I’m sure it’s going to be spectacular like the original store.

Next is the Meat Department. Don’t miss the Exotic Meat case where you can buy two different kinds of kangaroo meat (ground or medallions), antelope, elk, rabbit, pheasant, squab, and more.

This second Jungle Jim’s location has plenty of props, but doesn’t have the animatronics that the original store has, like the singing Elvis lion. The only moving display that I can recall is this display of bees flying around a hive. This is the honey section, of course.

The Natural Foods Deparment is marked by a hippy camper.

If anyone in your family is on a gluten-free diet, check this out:  aisle after aisle of gluten-free foods.

I love how they used icing writing for the sign for the Bakery Department.

And so Fido doesn’t feel left out, there’s a section in the bakery department just for dogs.

Next is a large Boar’s Head Deli, then you head into the Produce Department that has a large section of International Produce. My dad noticed and wholeheartedly approved of Jungle Jim’s employment of a sign painter to make the signs for the produce department.

Next you pass through the Dairy and Frozen Departments before arriving at the Beer Cave.

There’s quite a prop for this area:  race cars!

My husband likes that section. I, on the other hand, prefer the Wine Department.

And for those of us on a budget, they conveniently have a section of wines under $10 grouped together. There’s a matching display for wines under $20.

And because I’m a travel writer dedicated to writing about only what I personally experience, I stopped at the Tasting Bar to sample some wines.

Ohio State Law requires that alcohol cannot be given away, so each sample will set you back a quarter. After my visit to the Tasting Bar, we encountered Jungle Jim the Price Wizard again. Perhaps emboldened by my wine consumption, I approached Jungle Jim again and tried very hard to convince him that he needs to carry my book in his store. I think it worked. He was willing to pose for another picture, this time with me and my book.

Hang in there, we’re nearing the end of the store. Next up is the largest piece of cheese I have ever seen. It weighs 7155 pounds!!! My dad asked Jungle Jim when he was planning to cut into the cheese and Jim said he was going to wait at least three years to give it time to age. My dad wants to come back then for a piece of it.

Of course you can’t get to the registers without passing the Candy Department. They have LOTS of candy.

There’s a Jelly Belly car too.

And check out the PEZ section.

So, what do you think? Could you get through this store in less than three hours? If you’re planning a trip to Cincinnati, will this be on your itinerary?