Our family loves the national parks. Ever since I’d first seen the blue waters of Crater Lake in photographs, I’ve wanted to visit. But before I talk about the park, I have an announcement: Our trip to Oregon was significant because it marked my husband’s 50th state! He is the first in our family to achieve this. (I’m next with 47 states so far.) 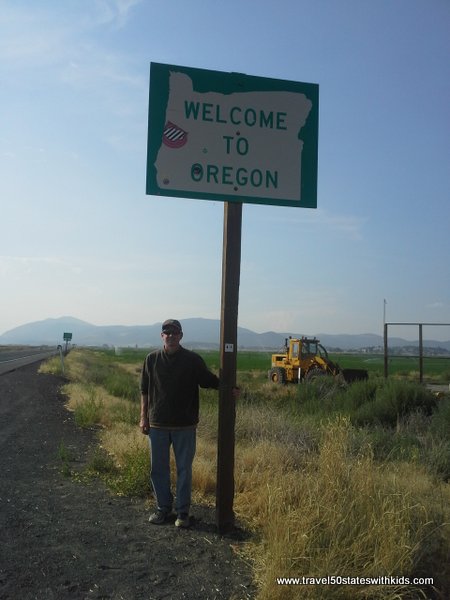 We are grateful to Travel Oregon and its partners, including Southern Oregon, for hosting our trip. They made our arrangements and negotiated discounted rates or complimentary admission for parts of our trip. Now, on to Crater Lake National Park. 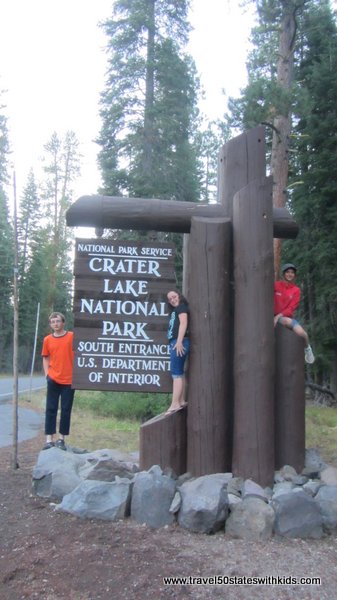 We entered the park from the south side and stopped at the Steel Visitor Center first. Just as with other national parks, the visitor center is a good place to learn more about the background and history of the park and ask park rangers for recommendations on how to spend your time. We enjoyed the 18-minute introductory film, Crater Lake: The Mirror of Heaven, and perused the map to get oriented. We learned that a volcanic eruption left a basin where a mountain once stood. Rain and snow filled the basin over thousands of years, creating the deepest lake in the United States. 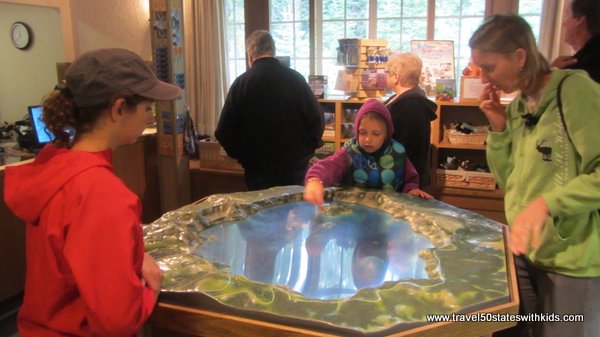 It was a cloudy, rainy day and we decided to start with a drive around the rim. Unfortunately, our view of Crater Lake looked nothing like the beautiful pictures I’d seen. 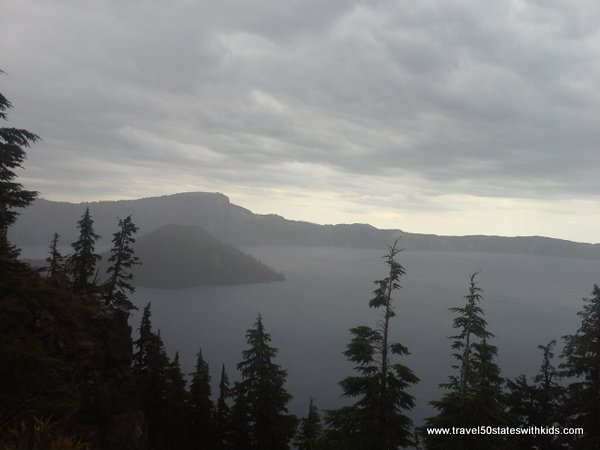 The water was blue, but the overcast skies really had a huge effect on the hue of the water. There were many overlooks around the rim drive where you could get out of your car for a better view. I convinced my kids to get out for a picture a few times, but it just wasn’t all that appealing to them in the rain. 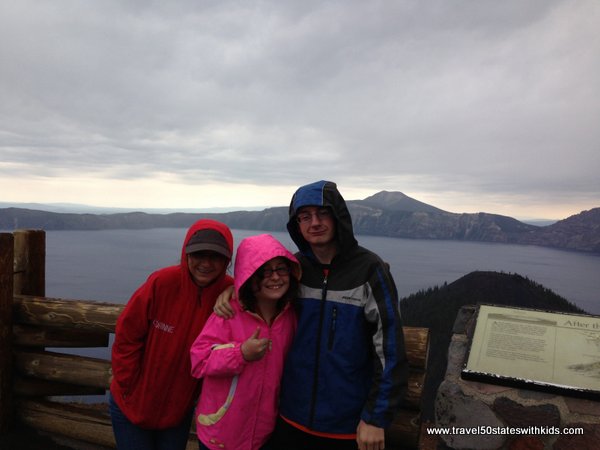 We chose to view Wizard Island from the Rim Drive only. One of the options is to hike down a steep trail and take a boat ride that stops at the island. We had considered doing this and decided against it, and since it ended up raining, I felt we’d made the right decision. 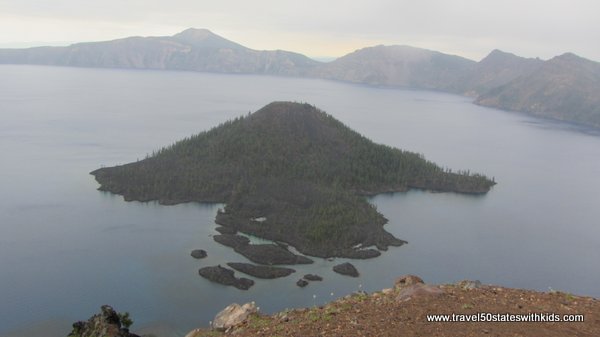 Another interesting island in the lake is named Phantom Ship. Perhaps this one is more advantageous to view in the foggy rainy conditions we experienced. What do you think–does it look like a ship? 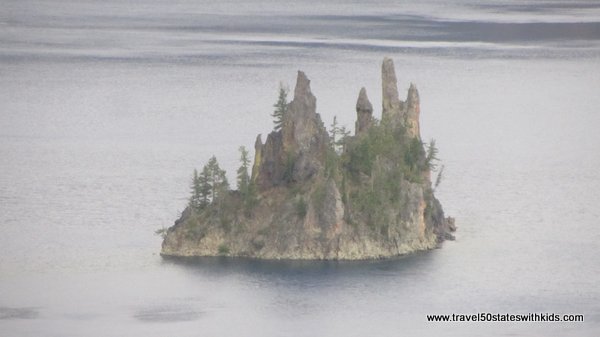 Once we completed the Rim Drive, our family divided into two groups: the sane, and the not-so-sane. My daughter Corinne and I (the sane group) drove out to the Pinnacles Overlook. 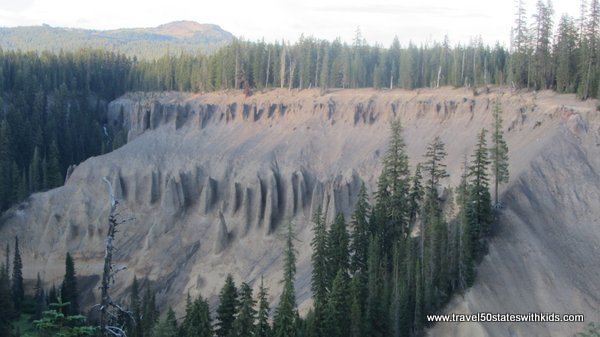 These were well worth going to see. The pinnacles are fossil fumaroles. Volcanic gases and ash rose up through the ground and solidified into rock and then erosion of surrounding soil revealed the pinnacles. 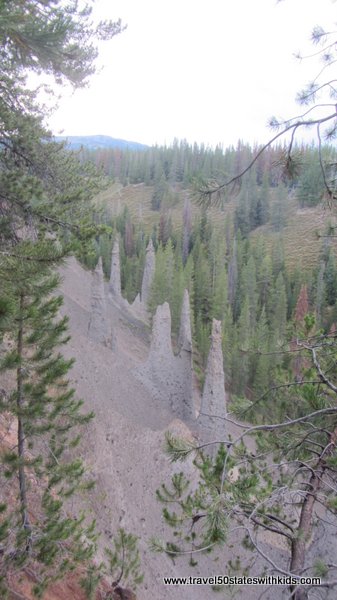 The not-so-sane part of the family thought hiking up a mountain in the rain was a good idea. Before we went to the Pinnacles, we dropped them off at the Crater Lake Lodge where the trailhead to Garfield Peak was located. The park newspaper lists this hike as a strenuous hike of 3.4 miles with a 1010-foot elevation gain with an expected duration of 2-3 hours. They said it was a nice path. 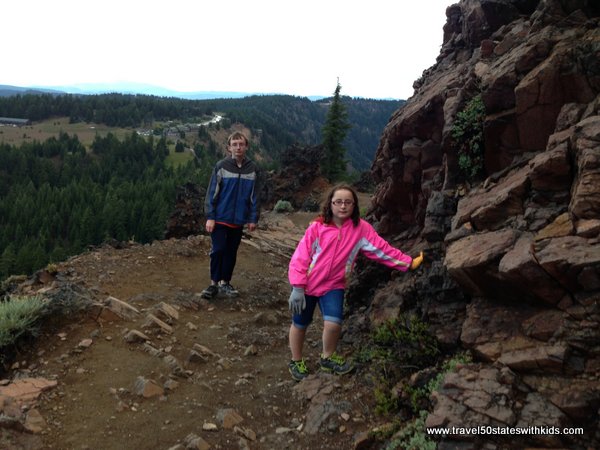 They said the view from the top of the peak was worth the hike. 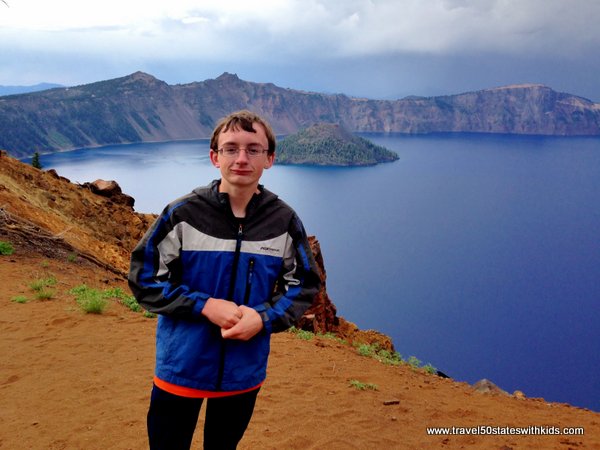 The sun even came out a little (doesn’t the water look bluer?) while they were up there and they saw a rainbow. It actually looks like they were “Over the Rainbow.” 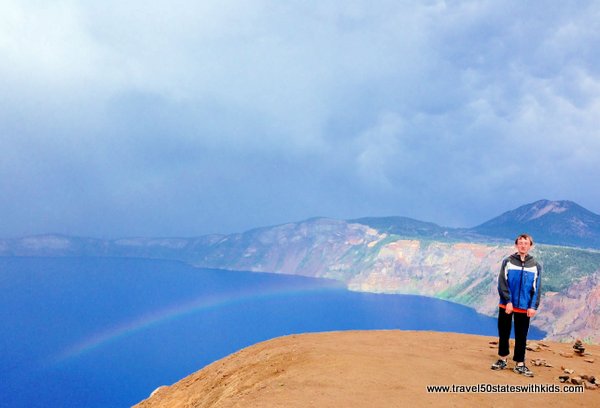 While we waited for them to return from their hike, Corinne and I checked out the beautiful Crater Lake Lodge. 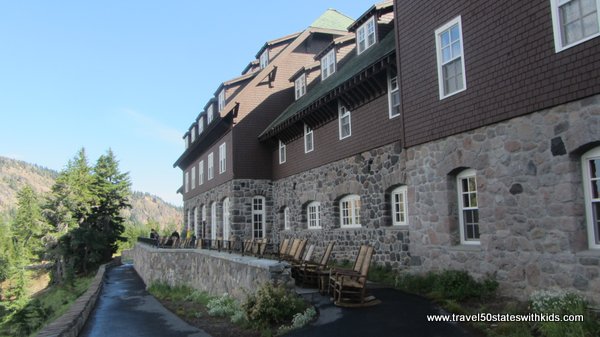 The architecture of the lodge was what you would expect from a national park showpiece hotel. 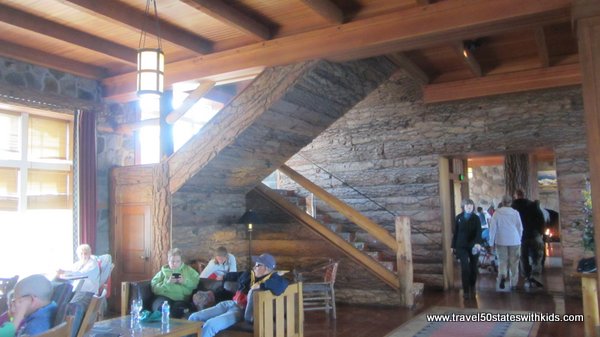 The dining room wasn’t as grand as the Ahwahnee at Yosemite, but it definitely had a rustic elegant look to it. 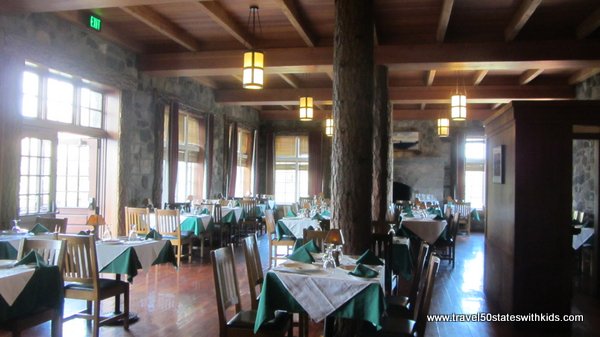 We didn’t eat there, however, because we had received an invitation for a complimentary dinner from the other restaurant in the park, Annie Creek Restaurant, located a few miles away in Mazama Village.  They didn’t know this, but this happened to be our 20th wedding anniversary dinner. 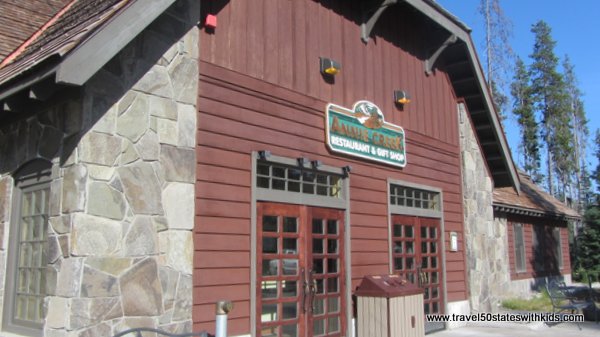 The inside wasn’t quite as special as the lodge, but still nice. 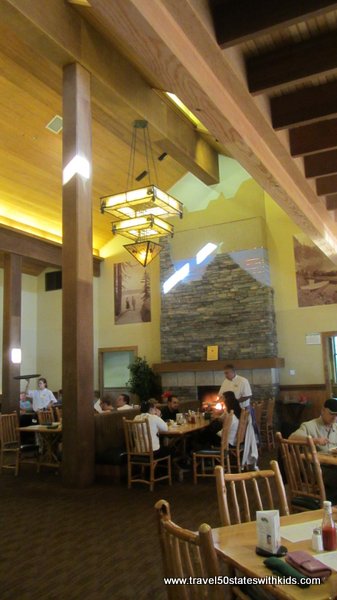 The menu consists of casual American favorites like fried chicken, pot roast, burgers and pizza. It wasn’t the most romantic anniversary dinner ever, but since the kids were with us, we were glad it was family friendly. It was pretty reasonably priced too for a national park. In the Rim Village Cafe, you’ll pay $9 for a pre-made deli sandwich and $4 for PB&J in a cafeteria setting. At Annie Creek, the burgers start at $11.95 with table service. I think that makes it the best dining value in the park.

By the time we made our travel arrangements, lodging inside the park was completely booked. Our hosts arranged for a discounted rate for us at Lake of the Woods Resort, about an hour away. 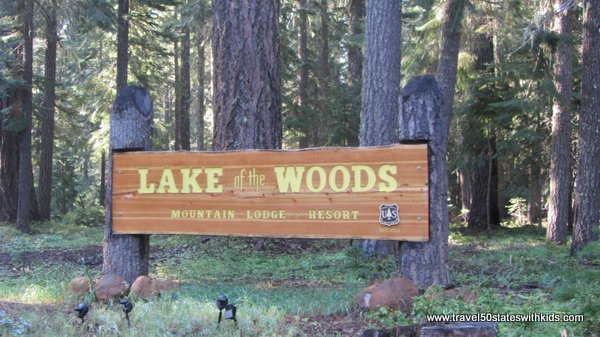 The resort had both campsites and cabins. We stayed in a cute 2-bedroom cabin. In addition to the bedrooms, the living area had a day bed with a trundle.  There were thoughtful touches such as board games and books in the cabin. 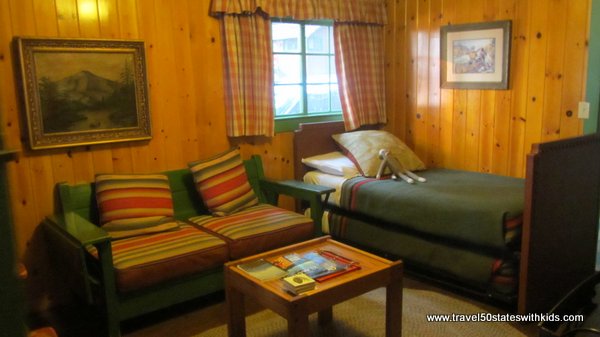 Behind our cabin was a fire circle with chairs. 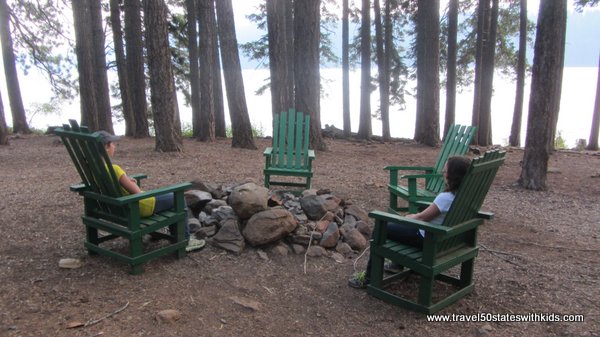 Lake of the Woods has a restaurant and we dined there one evening. The outdoor deck provided a nice view of the lake. 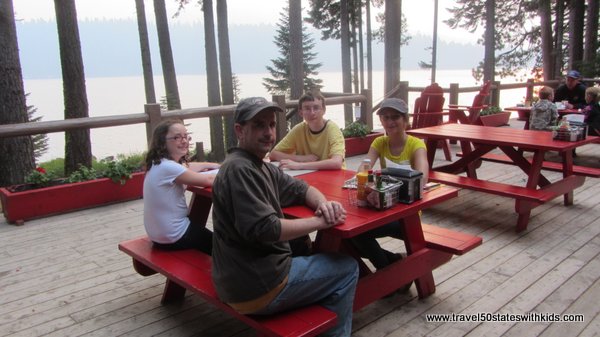 The resort also had a marina and one morning my husband and kids rented canoes and took them out on the lake for a while. 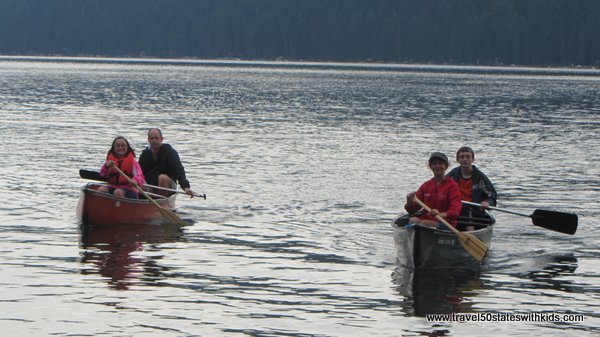 We enjoyed our stay at Lake of the Woods, but I do think the cabins are overpriced. The regular rate for the cabin we stayed in was $325 (which is more expensive than the highest price room at Crater Lake Lodge). For that rate, I expect high quality towels, sheets, and toilet paper, as well as daily housekeeping. I was taken aback by a sign informing guests that they were expected to wash their own dishes, take out their own trash, and collect linens and put them in a laundry bag at the end of their stay. For a much lower price that might be OK, but not for $325 a night.  It is a very relaxing setting, however, so I have no reason why I wouldn’t recommend camping there. Or if they lowered the cabin price, I would also have no problem recommending them.

Disclosure:  My family received a complimentary dinner at Annie Creek Restaurant and a discounted rate at Lake of the Woods Resort. We paid for all other expenses. All opinions are my own.