Gettysburg is a quiet town in south central Pennsylvania that likely wouldn’t be on anyone’s vacation itinerary except that it was the site of one of the most important battles of the Civil War, where 11,000 men lost their lives. It is now home to a National Military Park and Museum and should be part of your travel plans because your kids will learn about the history of the Battle of Gettysburg and the Civil War much better than they could learn from any textbook. 2013 marks the 150th anniversary of the Battle of Gettysburg and the park has special events planned. Our visit to Gettysburg last summer was delayed by a few hours because it was pouring down rain on our drive there. Unaware of just how extensive the museum and indoor exhibits are at Gettysburg, we made an impromptu stop at Hershey’s Chocolate World, just an hour’s drive from Gettysburg, for a couple of hours. When we arrived in Gettysburg later that afternoon, our first stop was the Museum and Visitor Center at the Gettysburg National Military Park. 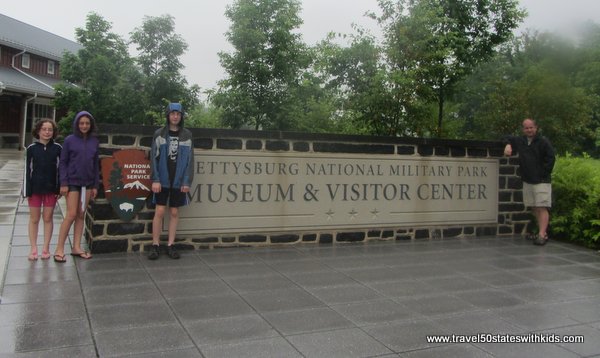 The Visitor Center should be your first stop for several reasons: to pick up information about ranger programs and other scheduled events; audio auto tour CDs can be purchased in the bookstore; and the museum should not be missed. While admission to the park is free, there is an admission fee for the museum. The fee is $12.50 for adults and $8.50 for kids ages 6-12. National Park passes are not accepted, but if you are a member of AAA, you can get a $1 discount. The exhibits are well worth the price of admission, so don’t skip them. I also really appreciated that since we arrived in the afternoon and didn’t have time to see everything before closing time, our tickets were valid for the next day as well. The fee includes admission to a film, the cyclorama, and the museum. If your children are interested in doing the Junior Ranger program, this is also the time to pick up the activity booklet. The booklet is designed to be completed as you go through the Visitor Center.

Start your visit in the theater. The film is named “A New Birth of Freedom.” This title is taken from a line from Lincoln’s Gettysburg Address: “that this nation, under God, shall have a new birth of freedom.” The film, which lasts about 15 minutes, is very good and is narrated by Morgan Freeman. From there, proceed to the Cyclorama presentation. Until our visit to Gettysburg, we were unfamiliar with cycloramas as an art form. A cyclorama is a cylindrical panoramic painting that is viewed accompanied by music, lighting effects, and narration. Cycloramas were a form of entertainment before movie theaters, and they often travelled from city to city, and were popular in the late 19th century. The Gettysburg Cyclorama was created by Paul Philippoteaux and a team of 20 painters in 1883-1884. At that time, eyewitnesses to the Battle of Gettysburg were still living and their accounts were used to created the painting. After a century of deterioration, a 5-year restoration of the Gettysburg Cyclorama began in 2003, restoring it to its original beauty. In addition to the painting, the foreground is filled with props to create a diorama. The cyclorama tells the story of Pickett’s Charge. Here are a few pictures that will give you a taste of the experience. 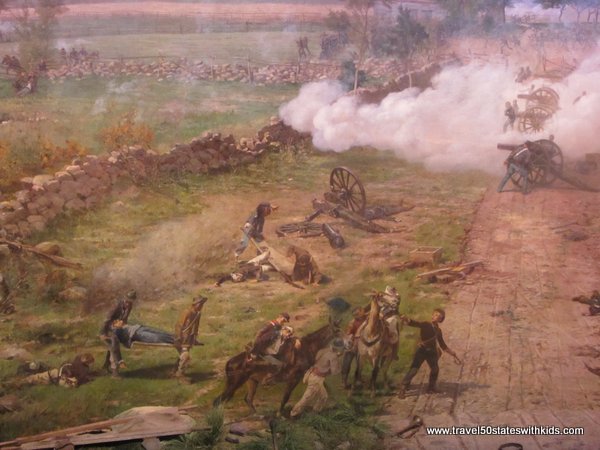 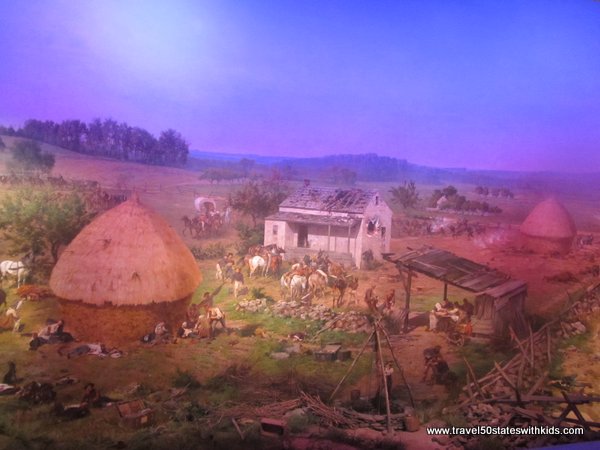 The next two photos show how objects in the foreground seem to blend into the painting. 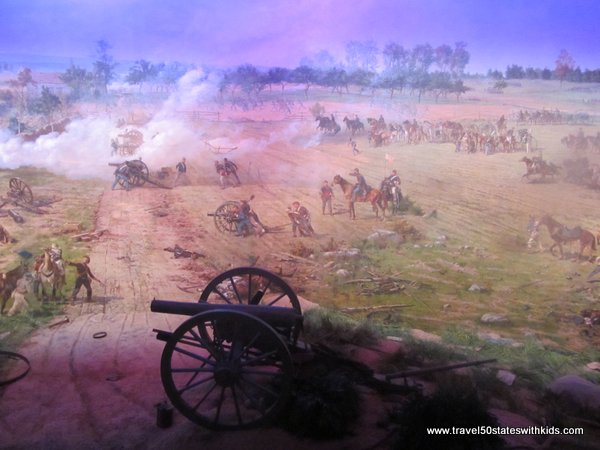 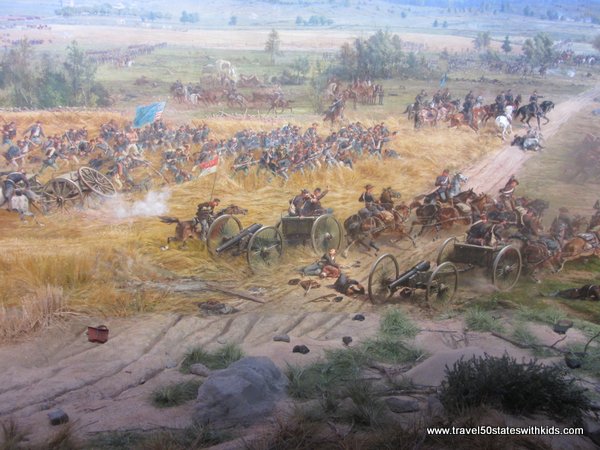 Fascinating, isn’t it? Additional exhibits discuss the history of the cyclorama and the restoration process. After the cyclorama, head to the museum. The Gettysburg Museum of the American Civil War, which opened in 2008, is organized into three sections. The first section covers the first two years of the Civil War, prior to the Battle of Gettysburg. The second section covers the battle and is subdivided into three sections, one for each of the three days of the battle. The third museum section covers the last two years of the war, the Gettysburg Address, and ends with Lincoln’s Assassination. The museum contains artifacts, interactive computer displays, and numerous short films. The films and interactive exhibits are especially nice for kids who tire easily when all the information must be read from a plaque. One of the exhibits we enjoyed was the comparison of soldiers’ uniforms of both armies. 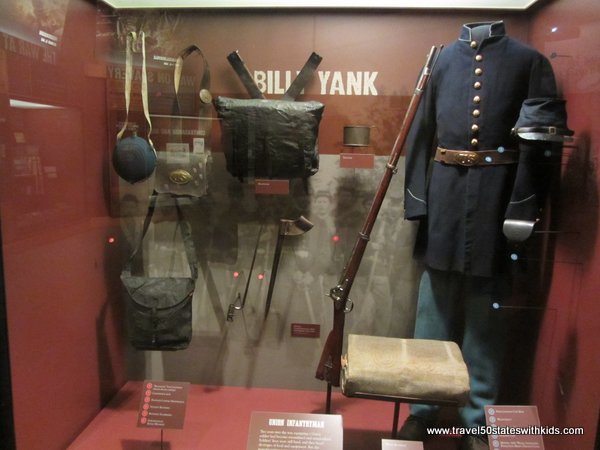 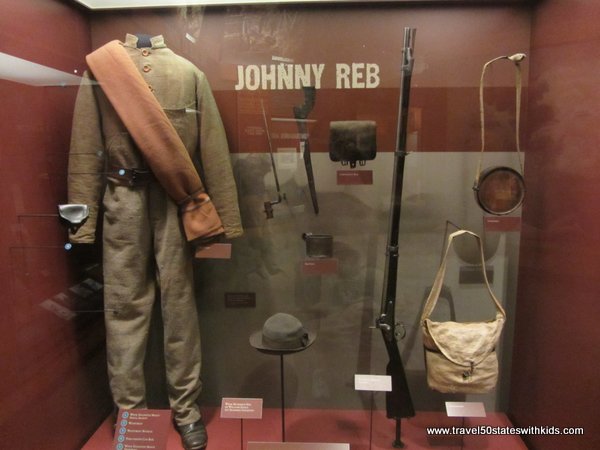 My kids enjoyed the films about each day of the Battle of Gettysburg. We were also moved by the recording of an actor’s rendition of the Gettysburg Address. Because the Visitor Center and museum close at 6 p.m., summer evenings are a great time to tour the battlefield because there is plenty of daylight left. There are several different ways to tour the battlefield. Licensed Battlefield Guides are available for hire for a fee of $65 and provide a 2-hour tour in your own vehicle. Bus tours are also available for a fee of $30 for adults and $18 for kids. The third option is a self-guided tour with either a book or an audio CD. We thought the best option for our family was the Audio CD tour because we could do the tour at our own pace and spend as much time at each stop as we wanted. There were even multiple CDs to choose from in the bookstore. We chose the Dramatized Audio Tour produced by the Gettysburg Foundation. It costs $21.99 and gives detailed driving directions through the tour route. This particular CD has musical accompaniment, narration, multiple actors, and sound effects. You’ll hear the story of the battle, see key locations like Seminary Ridge and Little Round Top, and see monuments along the way. My youngest daughter said she liked the tour more than she thought she would. Here’s the view from Little Round Top. 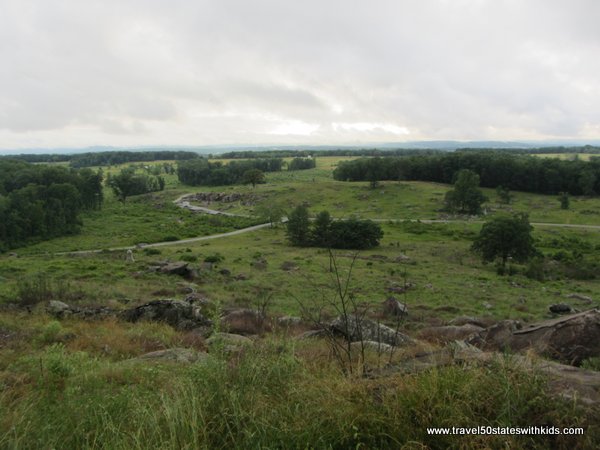 Here’s the Virginia Memorial with a statue of General Robert E. Lee atop his horse. 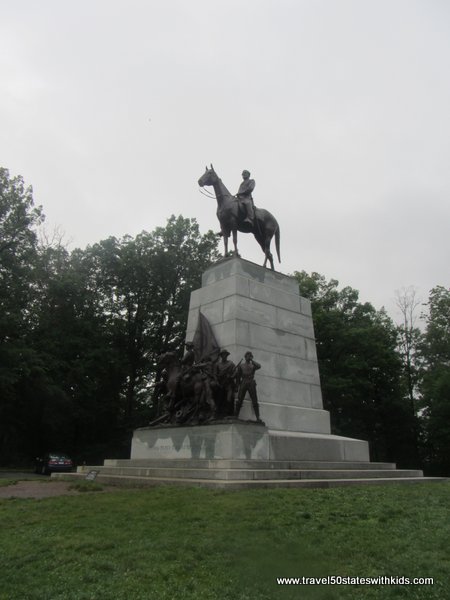 The auto tour ends at the Soldiers’ National Cemetery. 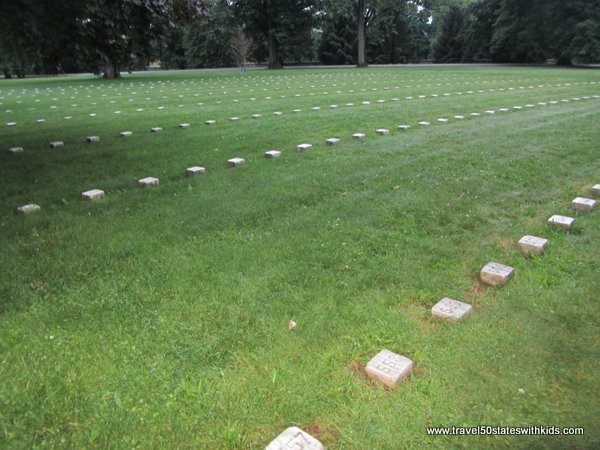 At the cemetery you can also view the Soldiers’ National Monument. 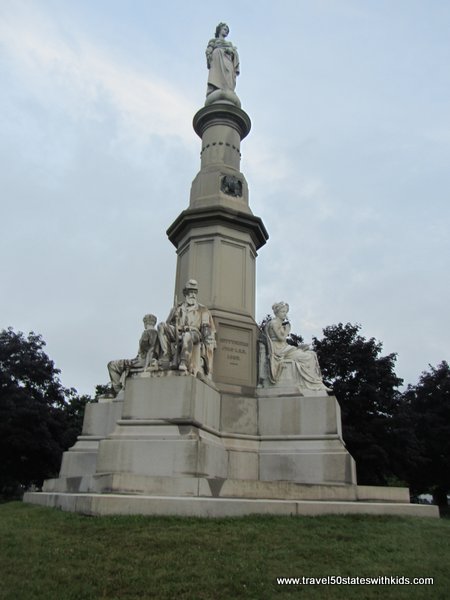 This cemetery was the setting for Abraham Lincoln’s Gettysburg Address. Reading the address in the actual place it was first delivered gave me goosebumps. 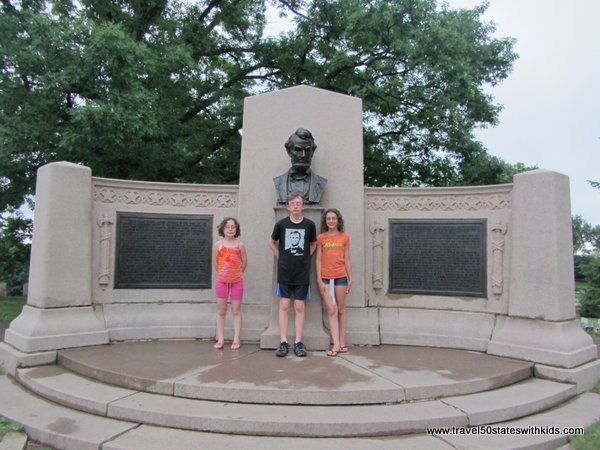 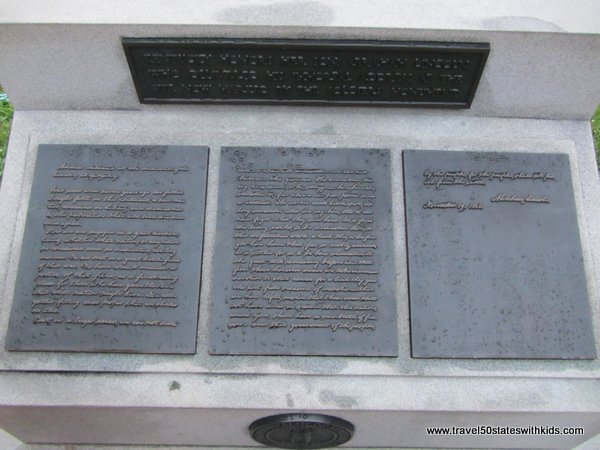 Four score and seven years ago our fathers brought forth on this continent a new nation, conceived in liberty, and dedicated to the proposition that all men are created equal.

Now we are engaged in a great civil war, testing whether that nation, or any nation so conceived and so dedicated, can long endure. We are met on a great battle-field of that war. We have come to dedicate a portion of that field, as a final resting place for those who here gave their lives that that nation might live. It is altogether fitting and proper that we should do this.

But, in a larger sense, we can not dedicate, we can not consecrate, we can not hallow this ground. The brave men, living and dead, who struggled here, have consecrated it, far above our poor power to add or detract. The world will little note, nor long remember what we say here, but it can never forget what they did here. It is for us the living, rather, to be dedicated here to the unfinished work which they who fought here have thus far so nobly advanced. It is rather for us to be here dedicated to the great task remaining before us—that from these honored dead we take increased devotion to that cause for which they gave the last full measure of devotion—that we here highly resolve that these dead shall not have died in vain—that this nation, under God, shall have a new birth of freedom—and that government of the people, by the people, for the people, shall not perish from the earth.

We were in Gettysburg about 24 hours and learned much more about the Battle of Gettysburg than we knew before we arrived.  I felt that was enough time to see the major attractions, but wouldn’t have minded staying a little longer to take advantage of opportunities we didn’t have time for: