While planning our trip to the Mid-Atlantic region last year, we considered both Hershey and Gettysburg as possible stops in Pennsylvania to break up the drive home from the Jersey shore. Gettysburg won. But as we were driving across Pennsylvania in a downpour, I started contemplating how miserable it might be trying to tour a battlefield in the rain. (I hadn’t realized how extensive the indoor exhibits were at that time.) Then, suddenly, I saw an exit for Hershey and made a split-second decision to change the itinerary and add a stop at Hershey’s Chocolate World after all.

Although the town of Hershey didn’t go as far as North Pole, Alaska with its theming, they do have streets named after chocolate and cocoa, and street lights that look like Hershey’s Kisses. This town has a number of attractions named after Milton Hershey, the founder of The Hershey Chocolate Company. You could easily spend a week in Hershey seeing all the attractions, including a garden, a museum, and an amusement park named Hersheypark. The admission for Hersheypark does not make it the kind of place where you spend only a couple of hours. If you want to visit Hersheypark, plan to make it a full day. If you only have a few hours and this is your first visit to Hershey, your destination should be Hershey’s Chocolate World.

Inside Hershey’s Chocolate World are several attractions, one that is free and others that charge admission. Start with the free attraction: Hershey’s Great American Chocolate Tour Ride. This is the closest thing Hershey has to a factory tour. It is like a low-thrill amusement park ride with a simulated factory tour. As an aside, when I used to live in California there was a Hershey’s factory there that gave actual factory tours, but they have since closed that factory. This ride/tour is both fun and informative, and should not be missed. While you are waiting in line, read the displays on the wall that tell some of the history of Milton Hershey and his company. 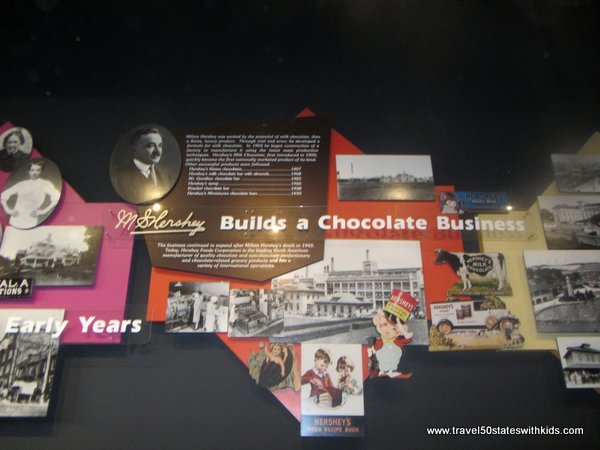 Then board the ride. Again, this is a low-thrill ride appropriate for all ages. 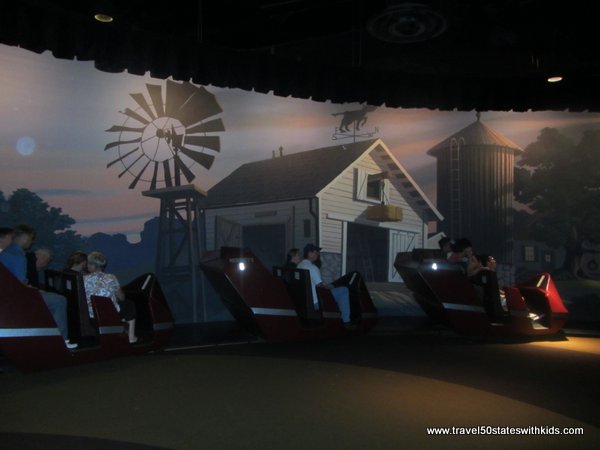 Not long into the ride, you will be introduced to three singing cows. They sing a catchy tune that will stay in your head for hours. 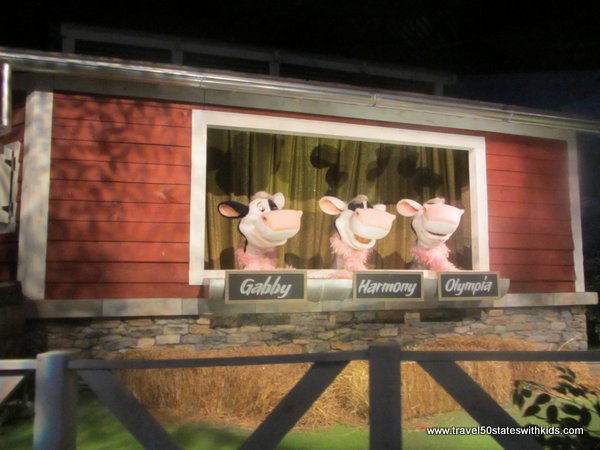 I can’t confirm this myself, but one of my daughter’s best friends told us that her sister called one of the cows stupid and the cow replied with a “stupid” of her own. If anyone wants to experiment with this, please tell me the results!

You’ll then be taken through a simulated factory where you learn how cocoa beans are harvested from cacao trees, processed, and turned into that yummy confection. You’ll also see how different Hershey’s products are made and packaged. 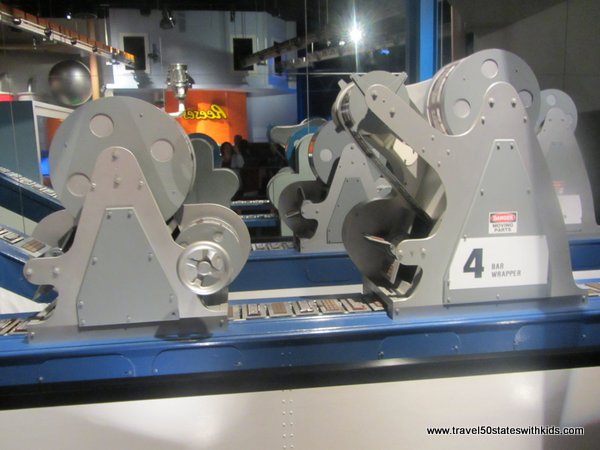 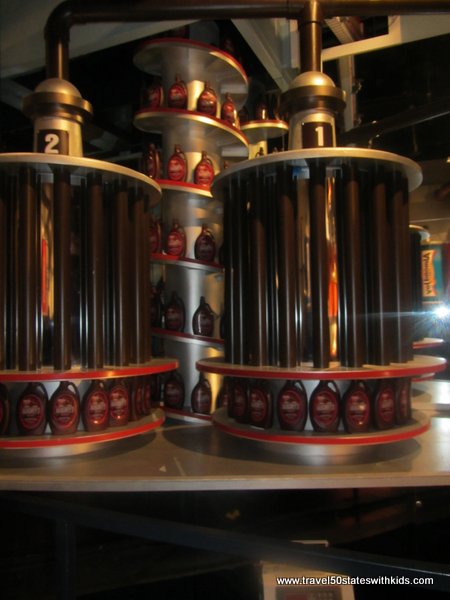 After the tour, you’ll be given a free sample of chocolate. 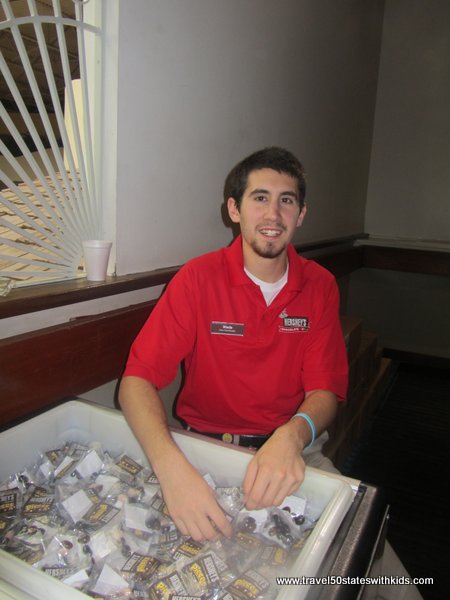 And that’s about where the free stuff ends. Everything else at Hershey’s Chocolate World is designed to get you to spend money. Other attractions at Chocolate World include a Create-Your-Own-Candy-Bar attraction, a movie (used to be 3D, but they’re changing it to 4D), a Chocolate-Tasting Adventure, a trolley tour through the town, a shop where you can design your own candy bar wrapper, a Dessert Creation Studio, and lots of shopping and dining.

We considered doing one of the paid attractions, but ultimately decided that our money would go further if we spent it in the gift shop and did our own chocolate tasting. The gift shop does not disappoint–it has apparel, merchandise, and, of course, chocolate. 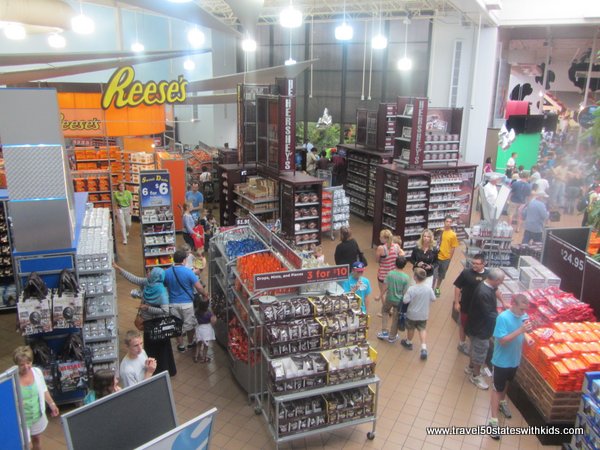 There are lots and lots of fun things to look at and buy. Look at these cute baby items. 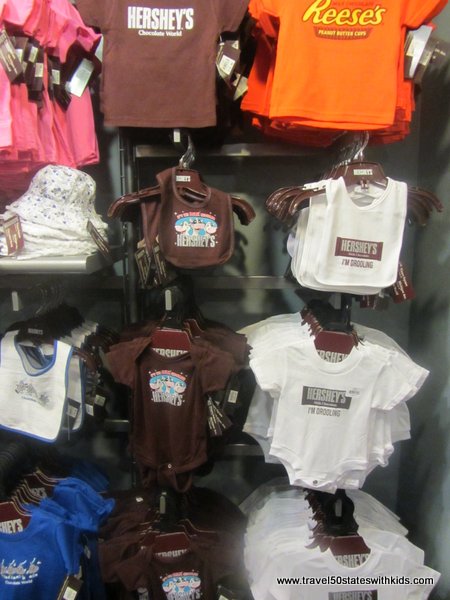 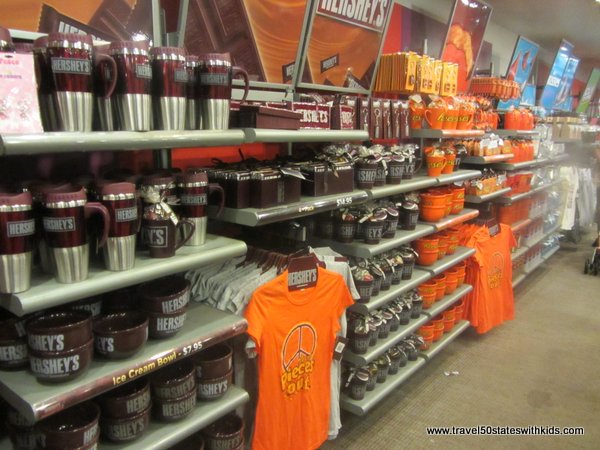 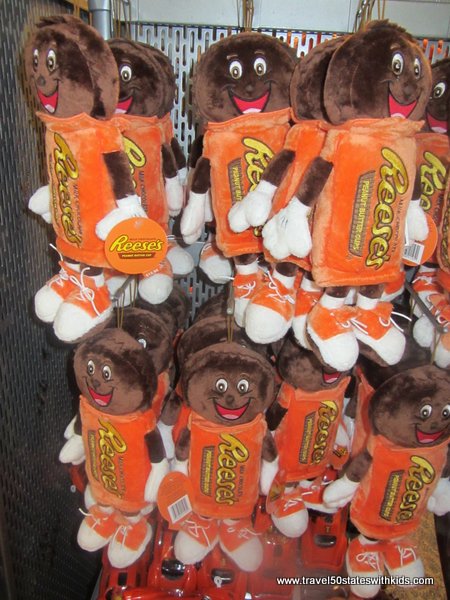 And you know you’ve been dying for some Reese’s flip flops, right? 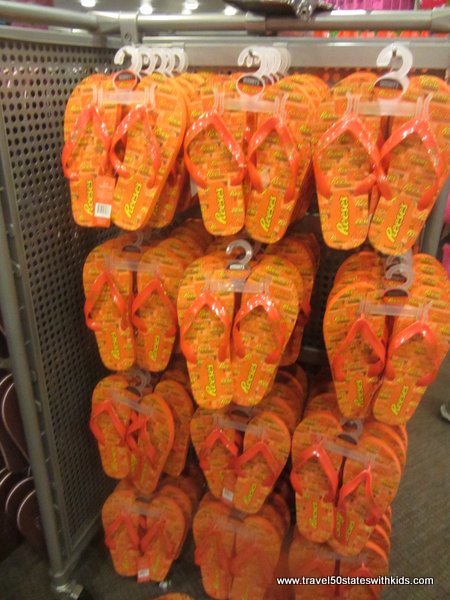 Speaking of Reese’s, there was a really funny coincidence of that day. Remember at the beginning of the day we were headed to Gettysburg, not Hershey. Check out the shirt my daughter happened to wear. 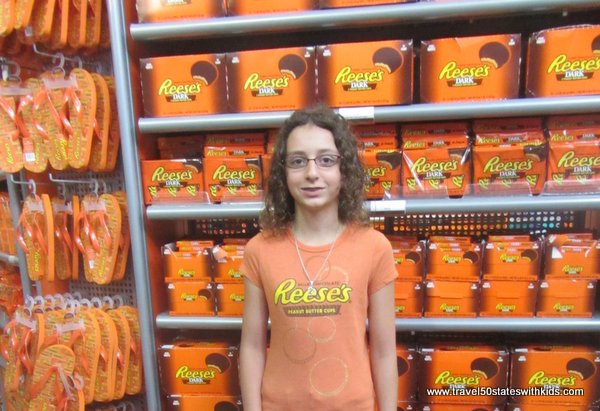 Incidentally, my son happened to wear his Gettysburg Address t-shirt that he had bought in D.C., earlier in the trip. You can see a peek of it in this picture with the World’s Largest Hershey’s Bar. 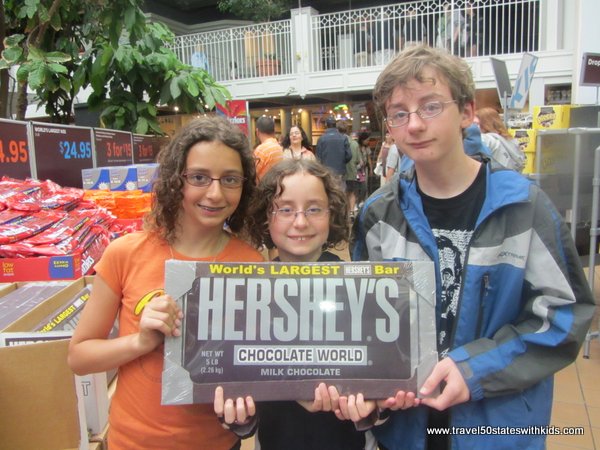 If you like super-mega-giant candy, they also have giant Hershey’s Kisses and Reese’s Peanut Butter Cups. After stocking up on chocolate, we headed to the food court area. 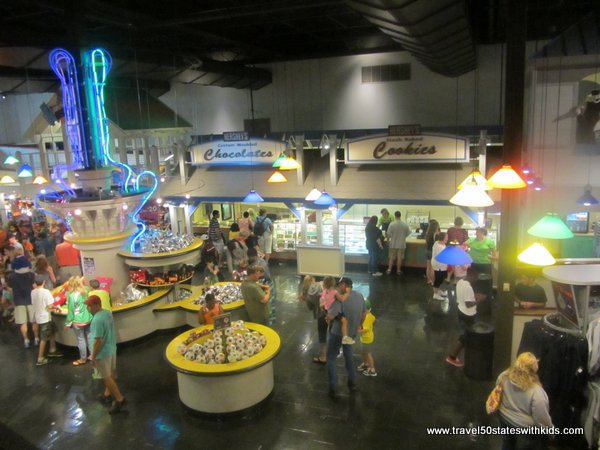 In addition to the bake shop, they had a deli, pizza, hot entrees, and soup in bread bowls. It was a very convenient place to have lunch before moving on to Gettysburg. By then, the rain had stopped, but we had such a fun time at our pit stop in Hershey that I would recommend a stop there whether it’s raining or not.