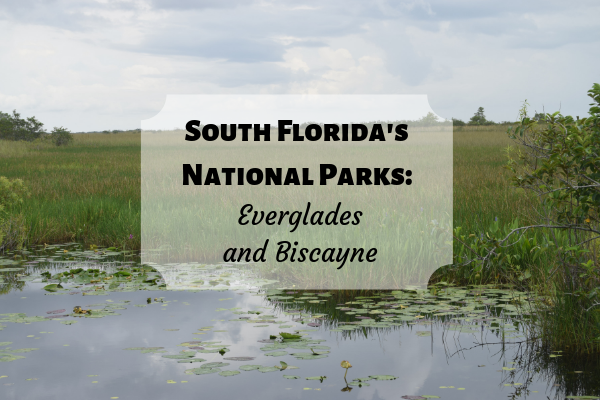 Last summer my son, Connor, was working at Florida Atlantic University in Boca Raton, FL. For his 20th birthday, the rest of the family went down to visit him for a long weekend. When I asked Connor what he wanted to do while we were there, he said that he really wanted to visit Everglades National Park.

The most popular time of year to visit the Everglades is the dry season, which runs from December to April. We were there at the end of June. While that is during the wet season, it is also much less crowded that time of year. I believe in making the most of the travel opportunities that present themselves. We just accepted that it was going to be hot and humid, but that was better than not visiting at all.

We stayed in a hotel in Homestead, Florida, which was located between both national parks. We arrived the night before so we could get an early start in the morning.

I had planned to check out this fruit stand later in the day, but when our GPS took us right past it on the way to the park, we decided to stop. 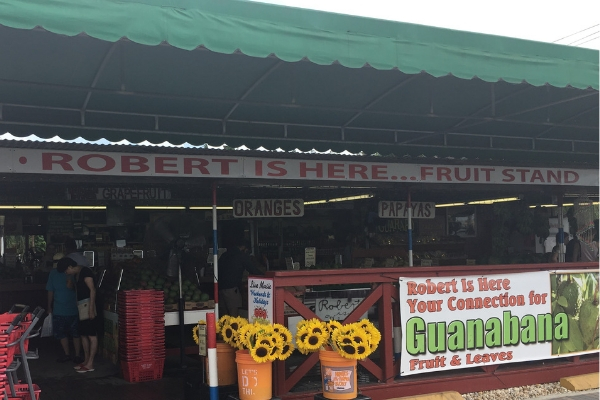 This place had every tropical fruit I’d ever heard of plus several more that were new to me. Have you ever tried a guanabana? They also sell smoothies and fruit milkshakes. Yummy! 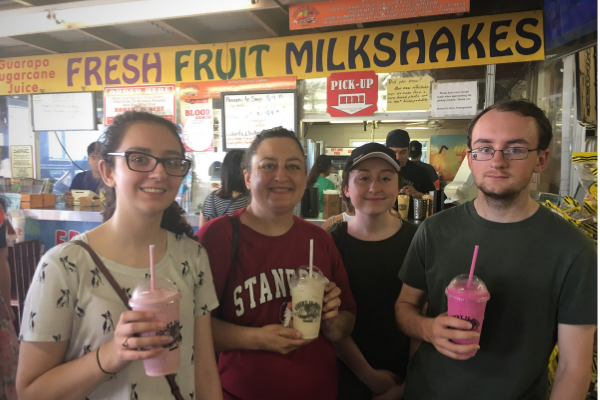 The Everglades is America’s largest subtropical wilderness. 1.5 million acres of it has been designated as a National Park. There are three ways to enter the park. We went to the main entrance, also the southernmost, near Homestead. There are also entrances further north near Miami and on the Gulf Coast side. 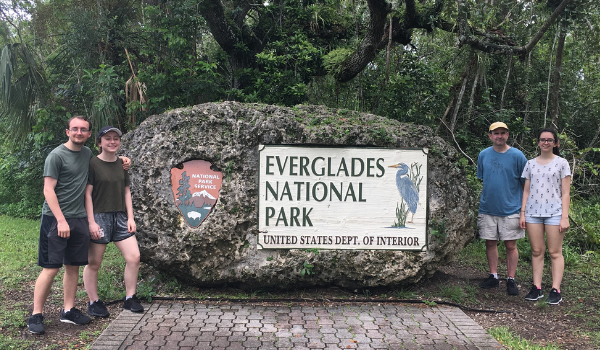 All of the entrances have visitor centers. Did you know that South Florida is the only place where alligators and crocodiles coexist? Do you know how to tell them apart? One of the visitor center exhibits allowed us to compare the skulls so that we could see the difference in shape. 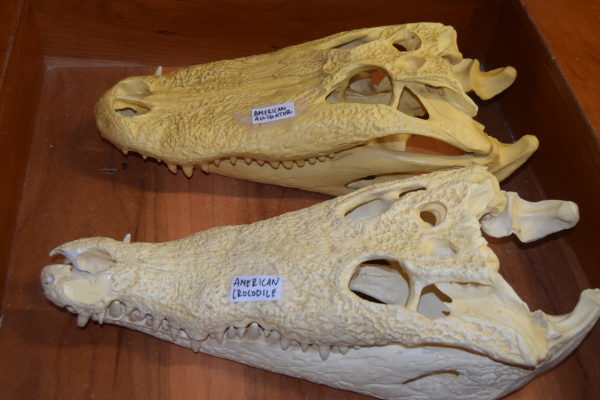 Since crocodiles inhabit the coastal areas, we weren’t expecting to find any on our visit, but we did hope to see some alligators. We decided to hike the Anhinga Trail, a 0.8-mile round-trip interpretive trail that starts at the Royal Palm Visitor Center and goes through a sawgrass marsh. Much of the trail is on a boardwalk. 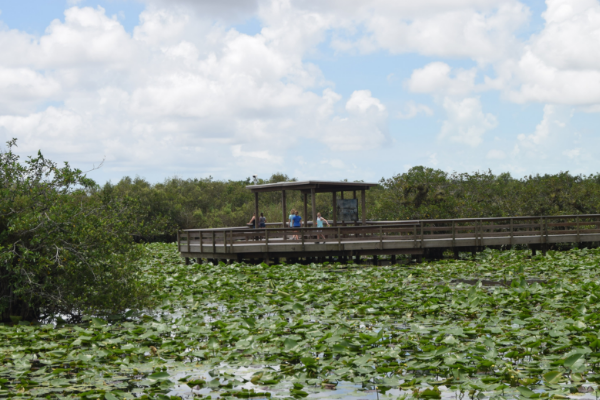 The trail wasn’t at all crowded during our visit, but we did see a few other visitors. Although I’m sure there are exceptions to this, I’ve found that the kind of people who visit national parks are goodhearted people who look out for each other. Visitors on their way out who had found an alligator were happy to share the location with others who were on their way in.

We kept our eyes peeled as we walked along the boardwalk. The first alligator we spotted had its head hidden, but we found the tail. They blend in well with their surroundings. Do you see it? 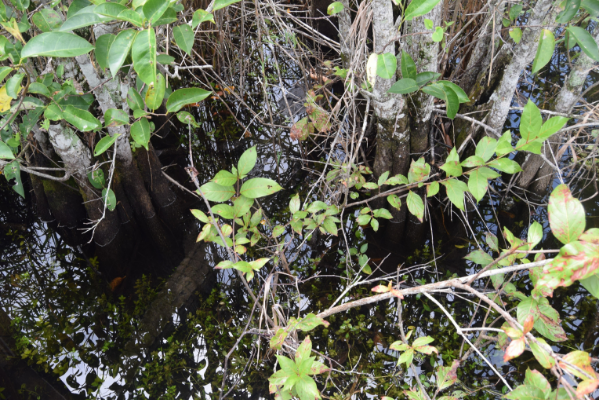 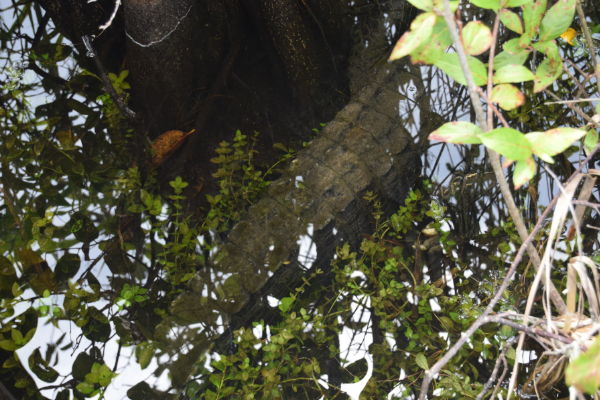 A little further down the path we saw a head. 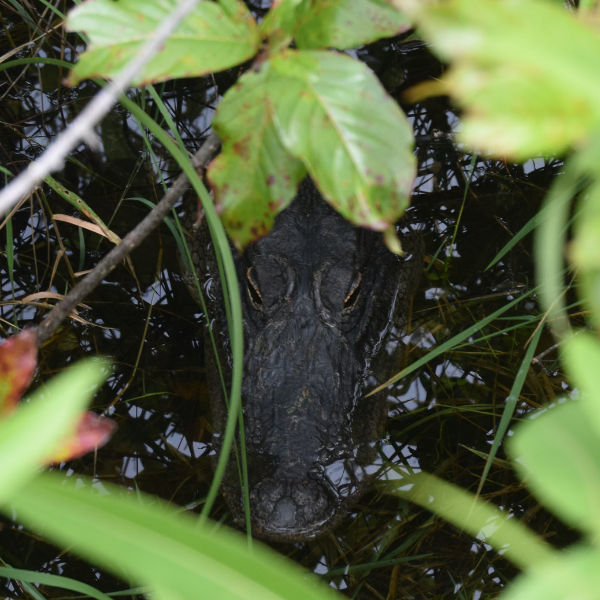 We were delighted to find colorful grasshoppers, lizards, and turtles, too. 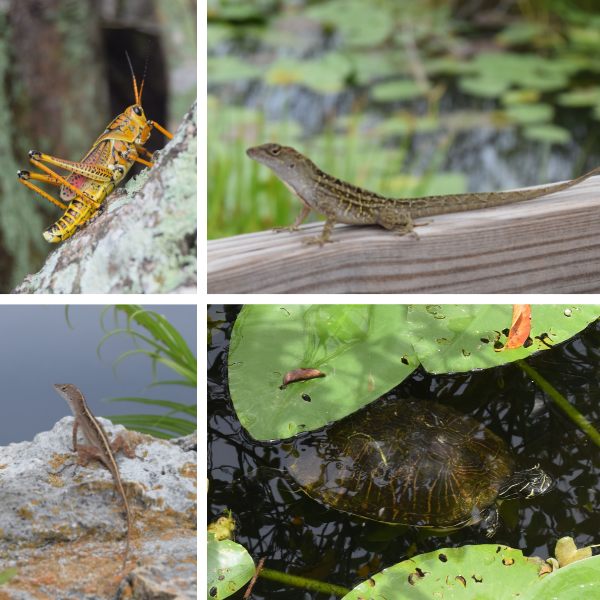 After enjoying the Anhinga Trail, we decided to explore a different part of the park and hike the Pinelands Trail. After we parked our car and were walking to the trailhead, we encountered some more look-out-for-your-neighbor-type visitors. They warned us that there was a rattlesnake blocking the trail. I think they thought we might not have heard them correctly when we excitedly continued toward the trailhead. Although we planned to keep a safe distance, we didn’t want to miss a chance to see a rattlesnake in the wild. While trying to take a better picture, I did venture a little too close and the snake slightly lifted its coiled form and started shaking its rattle at me as a warning. I gladly complied and backed up several feet. You’ll have to settle for this slightly blurry shot. 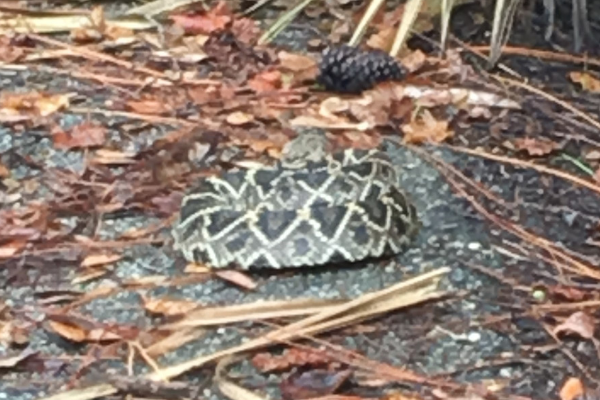 One of the activities that we wanted to experience was an airboat ride. Everglades National Park does have some authorized airboat tours, but they are located in a different section of the park. Instead, we headed to Everglades Alligator Farm which is located just a few miles outside the main entrance of the park.

We signed up for the first available airboat ride because it looked like some summer storms were headed our way. The boat ride started out at a very slow pace so that we could search for alligators. It didn’t take long to find one. 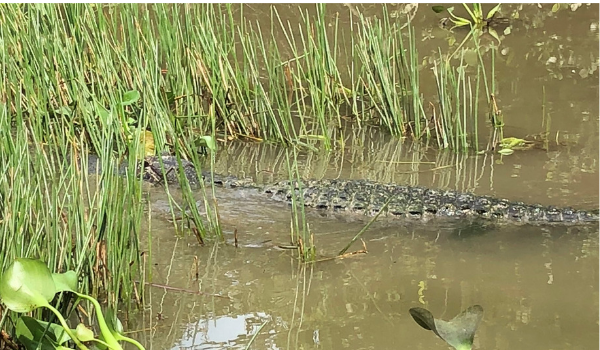 After that we moved into a more open area and our driver picked up the speed. This video shows what you can expect.

Fun, huh? And that breeze felt really nice, too. 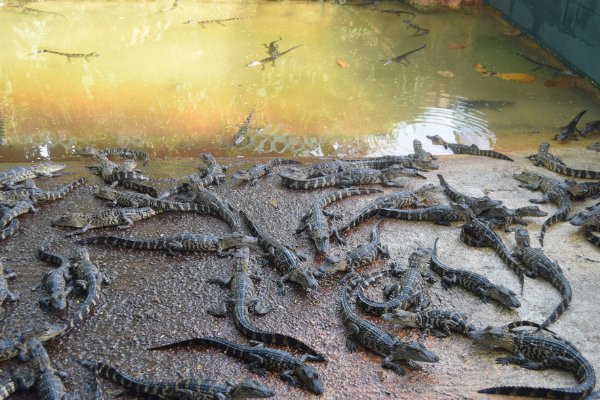 Then came the 3-4-year-old alligators. 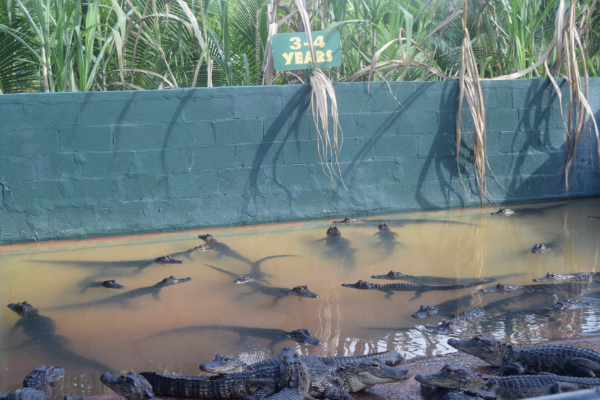 The adult alligators had a much larger area. 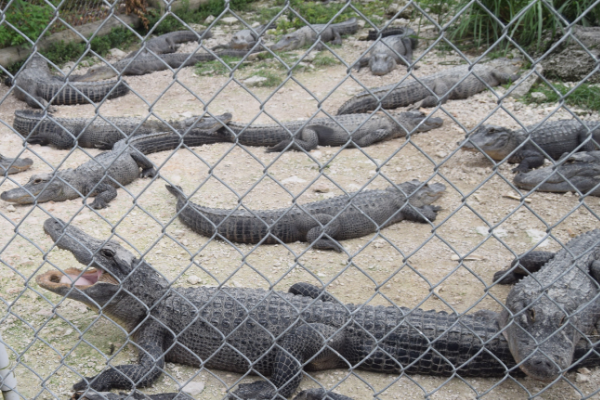 It was fun to watch them crawl around. And although we didn’t catch the feeding on film, that was also fascinating to watch.

We enjoyed watching the Alligator Show, but I certainly don’t want that guy’s job! 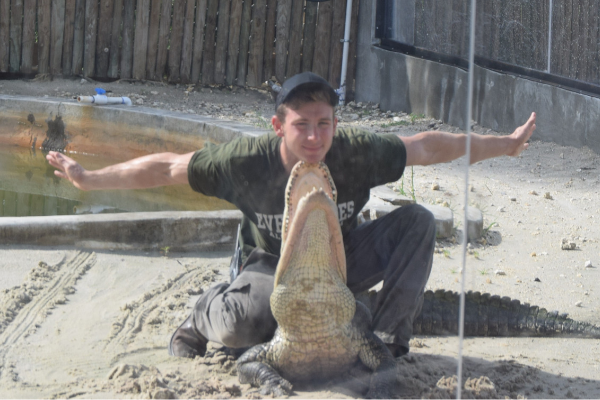 The snake show was also very interesting and involved audience participation. When he asked my daughter to reach into a bag and pull out a snake, she didn’t hesitate! 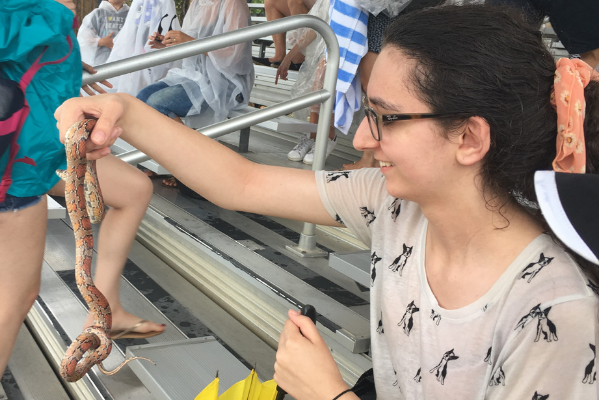 After the shows were over, audience members could take turns holding some baby alligators. Such cute little guys! 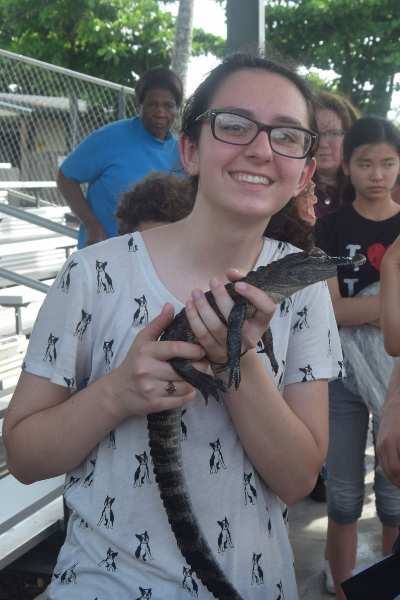 Everglades Alligator Farm had more than just alligators and snakes. Check out this tortoise. 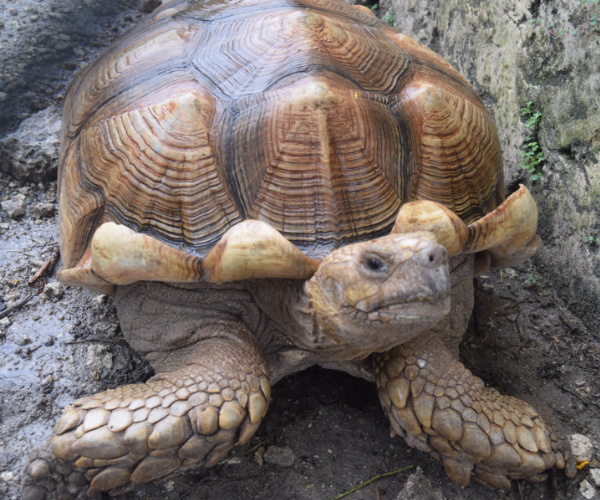 And there were some birds too. My husband looks like he’s a bit scared that the emu might bite off his hand while he was feeding it. (It didn’t!) 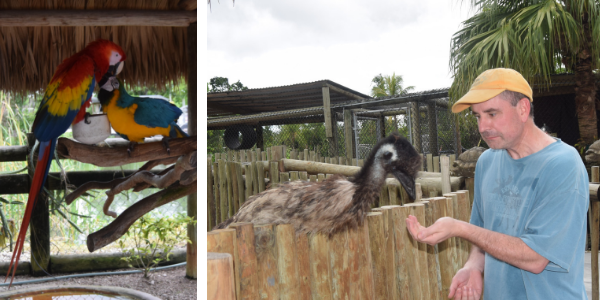 One of my favorite parts of our visit was discovering that the parrots we passed on our way in and out were trained to say hello and goodbye.

I hope this next part doesn’t freak anyone out. On our way back to the hotel we stopped to try some alligator meat at the Everglades Gator Grill. Their menu went significantly beyond fried gator bites. They offered gator tacos, gator sandwiches, gator kabobs, gator stir fry, and gator fajitas. They also offered a bunch of non-gator options.

After a very full first day, we enjoyed a lazy morning at the hotel. We let the kids sleep in and then spent a little time at the swimming pool before checking out. 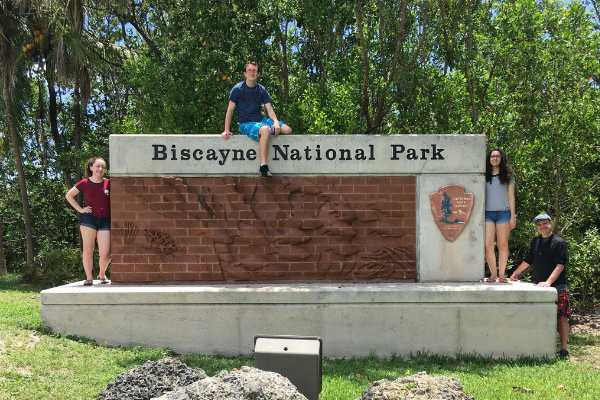 We started our visit to Biscayne National Park like all of our other National Park visits–at the Visitor Center. However, 95% of Biscayne is water, so we felt that it was important for us to explore that aspect of the park.

Biscayne offers guided boat tours, canoeing, kayaking, snorkeling, and scuba diving. We decided to go for an afternoon snorkeling tour. Our tour started with a talk by one of the park rangers. We learned about the park and some of the animal species we might see while snorkeling. 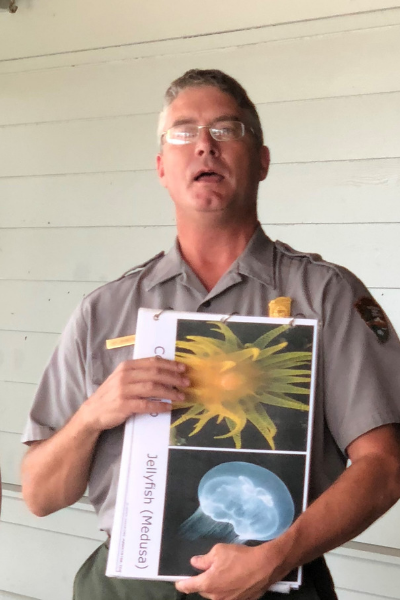 Our snorkeling tour lasted about three hours: one hour to get to the snorkeling spot, an hour of snorkeling, and then an hour ride back. Did you know that the Florida Keys start in Biscayne? 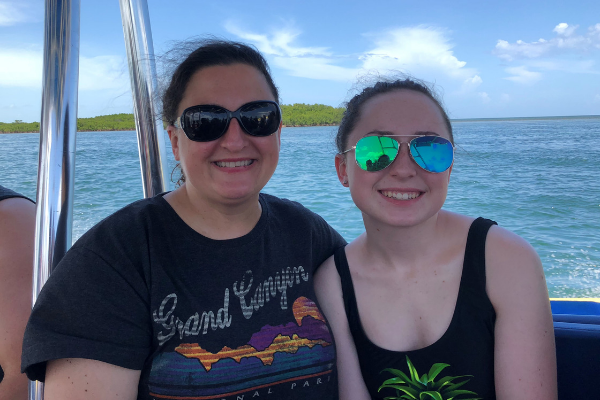 I completely forgot to bring my GoPro with me, so I didn’t get any underwater pictures.  We had a good time snorkeling.

After we got back to land, we were excited to see an iguana that crossed the road in front of us. 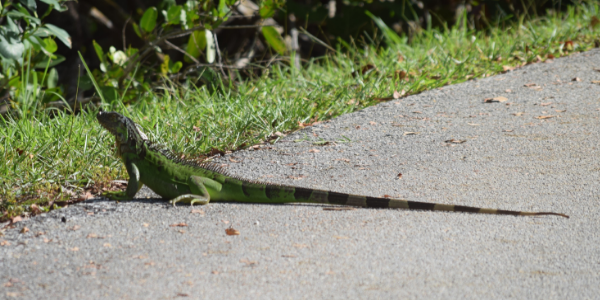 Our getaway to South Florida’s National Parks was short but memorable. It was also completely doable in two days. It would make a great add-on to cruises leaving out of Fort Lauderdale or Miami. 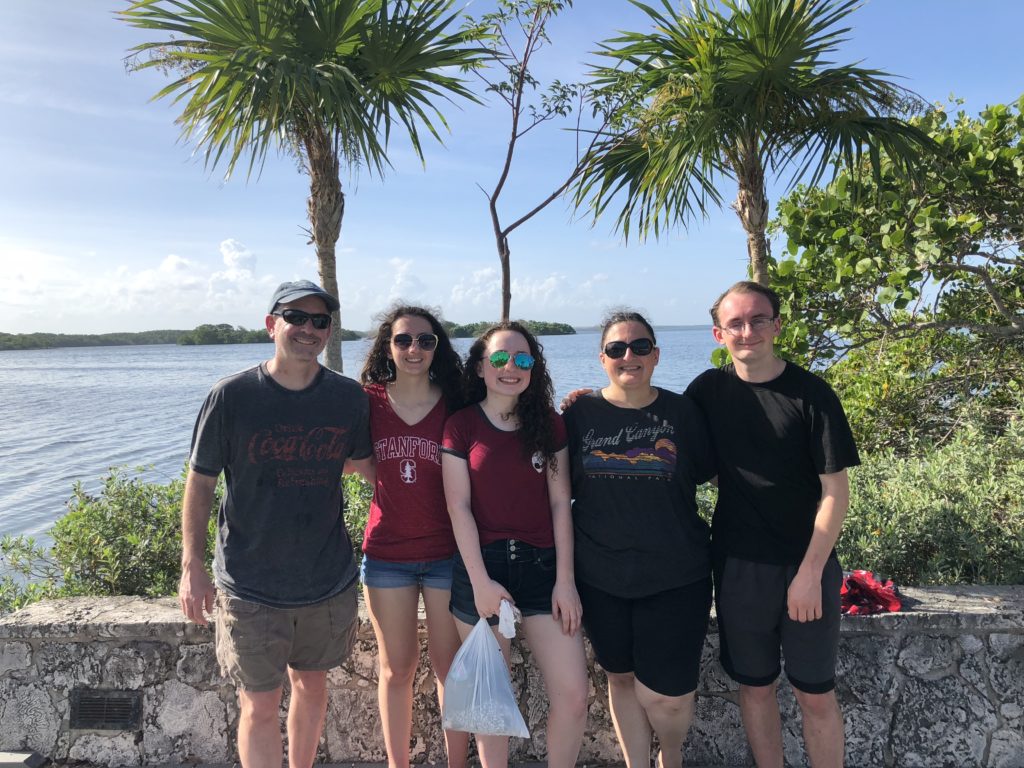 Let me know if you would like me to help you plan a trip to South Florida’s National Parks or any other destination.