Washington, D.C. has a lot of memorials.  Tourists with a limited amount of time need to pick and choose which ones they really want to see.  I’m glad we decided to include the 9/11 Memorial at the Pentagon in our plans.  One of the DC Area’s newer memorials, it was designed to provide a thought-provoking experience while reflecting on the events of Sept. 11, 2001.  The memorial was designed by Julie Beckman and Keith Kaseman of the architectural firm of Kaseman Beckman Advanced Strategies and was opened to the public on Sept. 11, 2008. 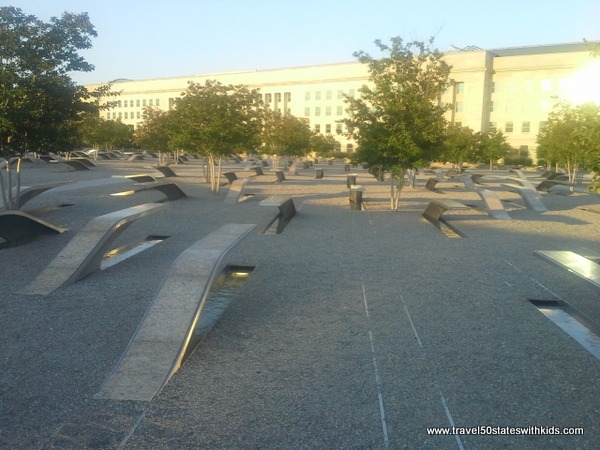 Rather than a single large structure, the Pentagon Memorial has more of a park feel to it, with maple trees and a bench to commemorate each of the 184 victims that lost their life there on that day.  Just one look at the memorial helps visitors visually quantify the number of people that were taken from us.

The benches are situated in rows according to the age of the victim.  At the end of each row you can read the birth year for that row.  A wall at the end has a step upward for each year.  The victims ranged from 3  to 71 years old.  The rows are aligned on the angle that the American Airlines Flight 77 was traveling when it crashed into the Pentagon.  The benches pointing inward toward the Pentagon represent the victims on the plane and the benches pointing outward represent victims killed inside the Pentagon.  The point of impact on the Pentagon can be seen from the memorial. 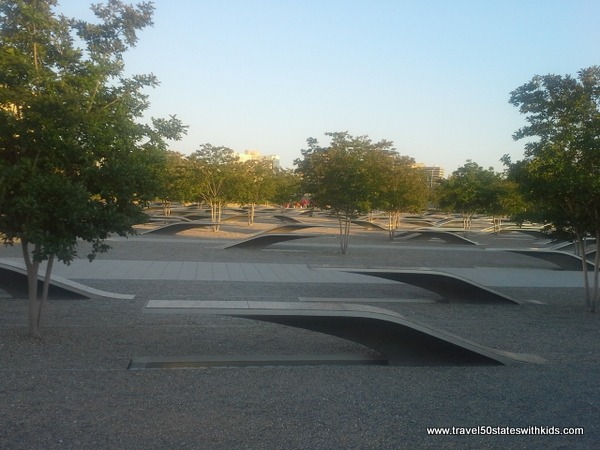 The memorial is open 24 hours a day, 365 days a year and has free admission.  As a practical point, I will note that so many of DC’s attractions have limited daytime hours, so a visit to the Pentagon Memorial can conveniently be planned for an evening or weekend, when other attractions are closed.  The website has directions to get to the memorial via car or public transportation.

An audio tour about the Pentagon Memorial can be found on their website, or accessed via mobile phone during your visit.  Just call (202) 741-1004 to choose from either a 25-minute or 12-minute tour that guides you through the memorial.  You’ll also hear eyewitness accounts from some of the survivors on the longer tour.