A visit to Arlington National Cemetery can be moving and memorable, if your kids are old enough to appreciate what they are seeing. Arlington is just one of over a hundred national cemeteries in the United States, but it is certainly the most well-known. 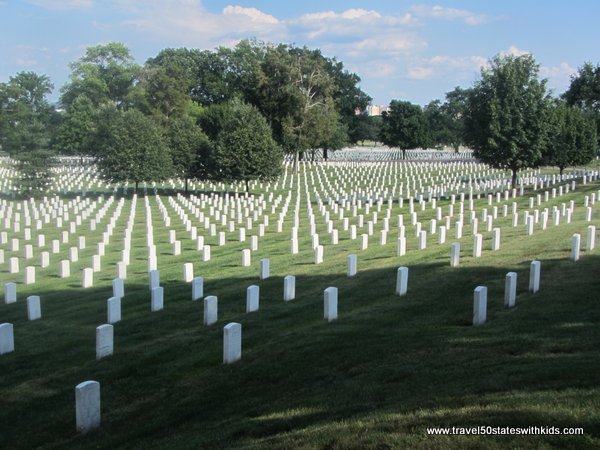 I confess that before this trip, I was completely unaware of the ties of this piece of land to George Washington and Robert E. Lee. We had already learned during our visit to Mount Vernon earlier that day that George Washington had no biological children and had adopted the children from Martha Washington’s first marriage. Martha Washington’s grandson, George Washington Parke Custis, inherited the land where Arlington now sits in 1802.  He built Arlington House as the centerpiece of the plantation. In 1831, his only surviving child, Mary Anna Randolph Custis was wed to Robert E. Lee at Arlington House where they resided for over 30 years. During the Civil War, Lee resigned from the United States Army and his family vacated the property. Federal troops took over the property and turned it into a cemetery.

You can arrive at Arlington National Cemetery by either car or Metro. A Metro stop is conveniently located at the entrance to the cemetery. We drove there because we toured Arlington on the same day that we visited Mount Vernon and had driven there. A visitor’s parking lot is located near the entrance.  Once you arrive at the entrance, your first stop should be the Visitors Center. There you can pick up a map and plan what you want to see. There is a lot of walking involved in a visit to Arlington and if you are visiting late in the day, say, after spending a bunch of time walking around Mount Vernon, remember to choose wisely and save enough energy to get back to your car or the Metro Station.

First on our tour plan was the grave of William Howard Taft, the only person who was both President and Chief Justice of the United States. Taft was from Cincinnati, where we live. His childhood home is a National Historic Site that I wrote about in my book. It seemed fitting to also visit his final resting place. 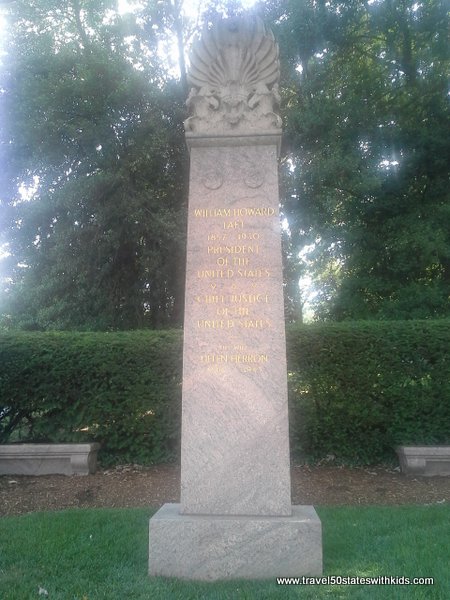 Next, we noticed that one of the streets of Arlington was named Weeks Avenue.  Our last name is Weeks, so we decided to visit “our” street. We came across the grave of John Wingate Weeks, who we discovered was in Congress, Senate, and served as Secretary of War.  As far as we know, we aren’t related, but it was nevertheless interesting. 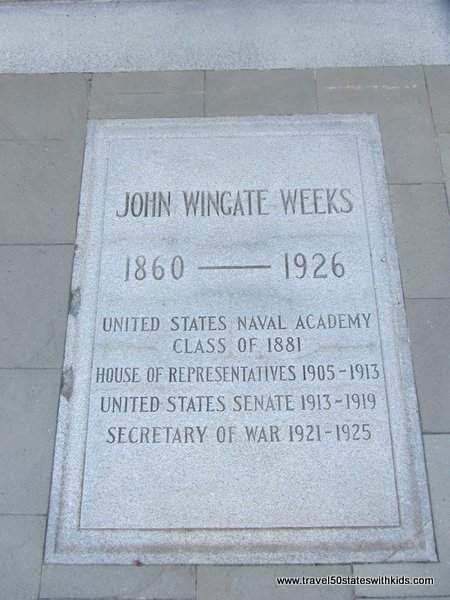 Here we are on Weeks Avenue. 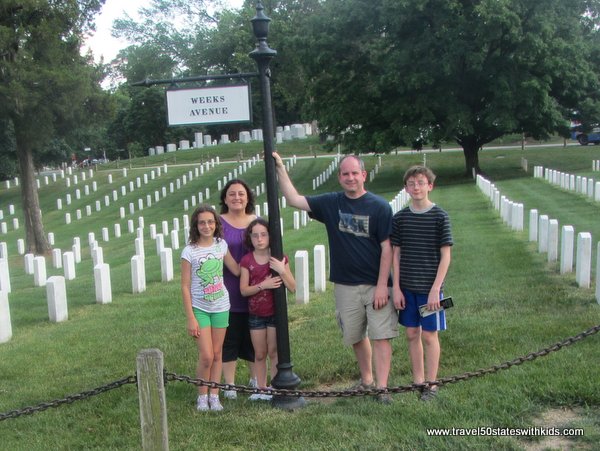 Not far from there was the gravesite of President Kennedy. 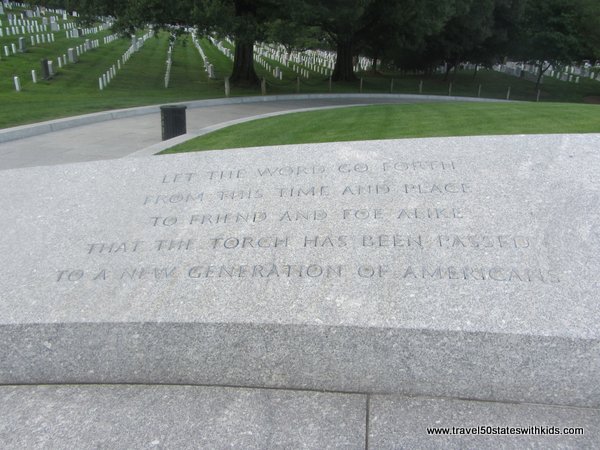 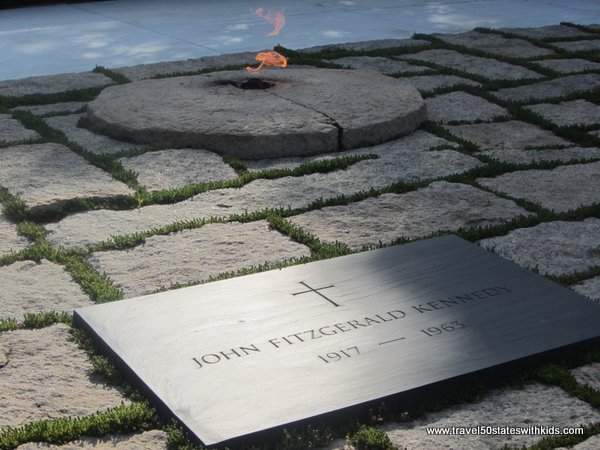 Next we visited the tomb of the Civil War unknown dead. 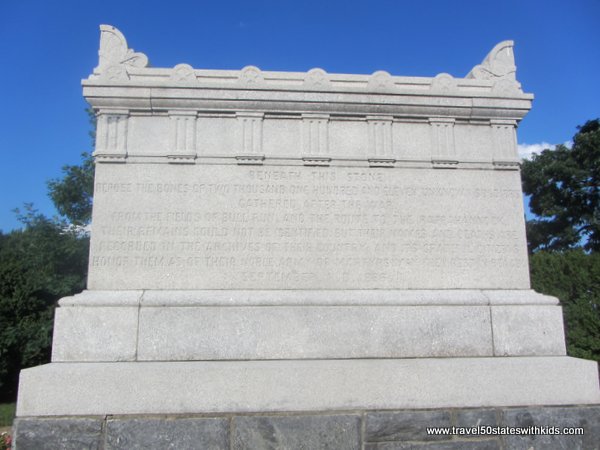 From there we walked up to Arlington House.  It’s on top of the hill and was quite a hike after a long day of walking, but the view was amazing. 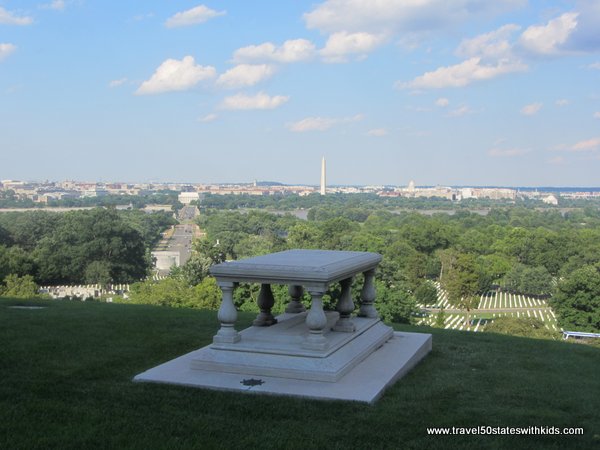 We rested for a few minutes on the steps of Arlington House. 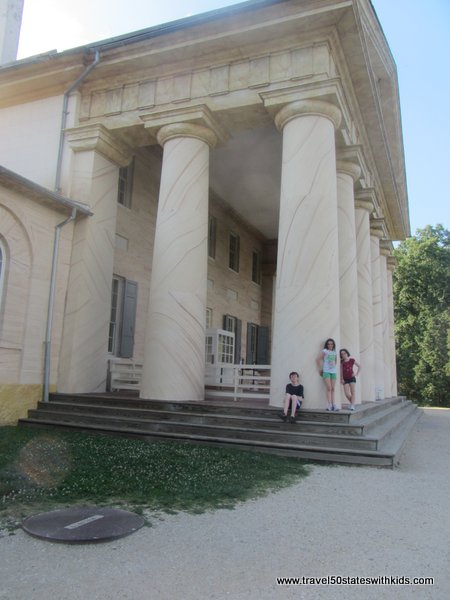 Now comes the part we could have planned a bit better. One of the most interesting parts of a visit to Arlington National Cemetery is watching the Changing of the Guard at the Tomb of the Unknowns.  We should have been keeping a closer eye on the time because we arrived about halfway through the ceremony.  The changing of the guard occurs on the hour, and, during the summer, also on the half-hour. 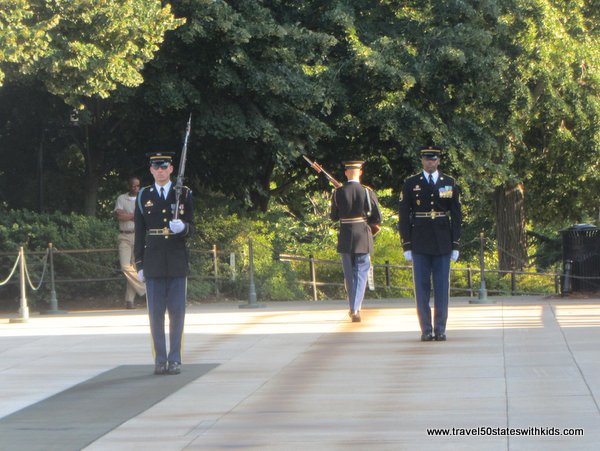 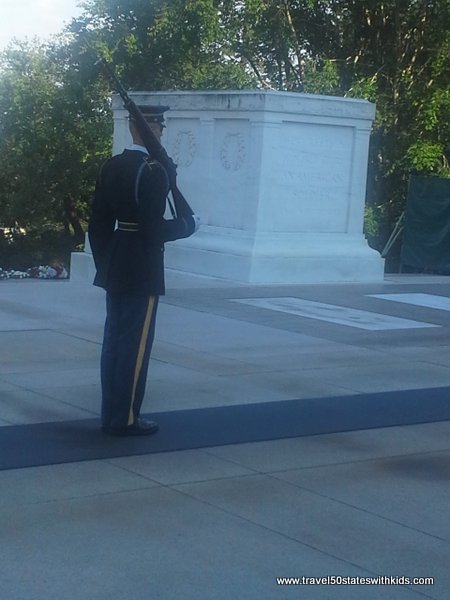 Fortunately, after the Changing of the Guard, there were two additional ceremonies in which flower wreaths were placed in front of the tomb. 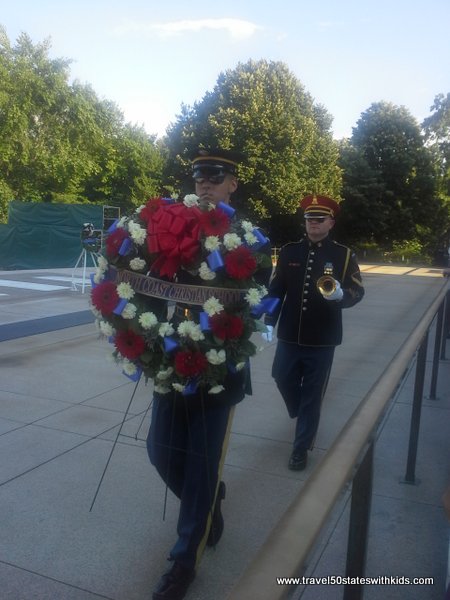 My youngest daughter who was 9 years old at the time, found this to be the most (and probably only) interesting part of our visit to Arlington National Cemetery. She hadn’t learned enough American History yet to really appreciate the rest.

At this point, all of us were pretty tired and ready to head back, but my son said he wanted to see the Challenger and Columbia memorials, so we mustered a bit more energy and made it there. When my children show an interest in learning, I try hard not to interfere. Here’s the Space Shuttle Challenger Memorial. 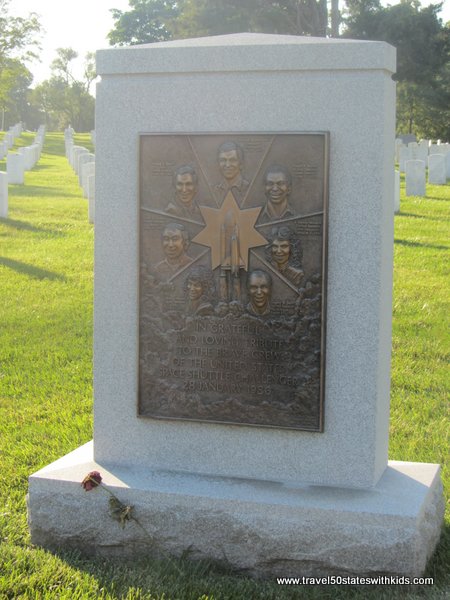 And the Space Shuttle Columbia Memorial. 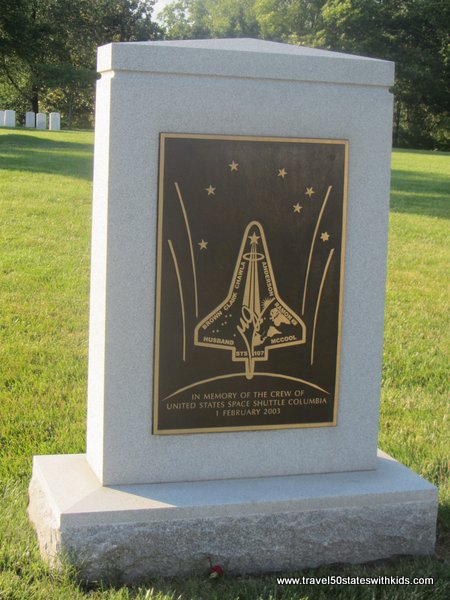 They weren’t as big as I expected they would be.

We spent about two hours exploring Arlington, though you could certainly spend much more time there. But two hours was enough for us, and actually more than enough for my 9-year-old.  Respectful behavior is expected at all times and it can be hard for younger kids who want to run around to restrain themselves. For younger kids, I would recommend seeing the Changing of the Guard and keeping the visit to no more than an hour.

Because we had driven a car, after we left Arlington, we made a quick stop to see the nearby Pentagon Memorial and Iwo Jima Memorial. 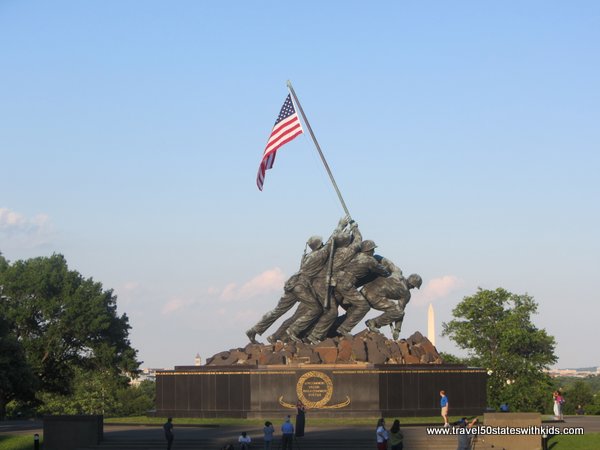